Posted on February 7, 2012 by markeminer 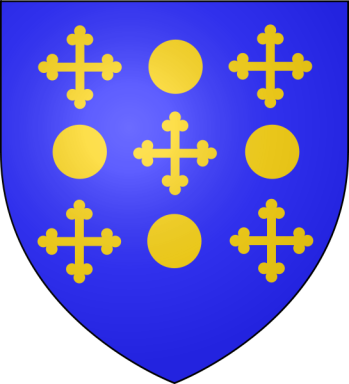 Joane Kember (Tember) was born born in 1584. Her parents were Robert KEMBER and Anna [__?__].   Joanna came to America in 1642 on the Hector with her son Tristram, his wife Dionis Stevens and their five children and her daughters Eunice and Mary.  Two other daughters remained in England where they married and lived out their lives.

Children of  Peter and Joane:

Will of Peter Coffin  From Archdeaconry of Totnes (Exeter), 1627.

” In the name of God, Amen, ye 21st day of December in ye third yeare of the raigne of our Sovraigne Lord Charles… I peter Coffyn of the Parish of Brixton in ye County of Devon being sick of body but in perfect minde and memory (thanks be to God) doe make and ordaine this my last Will and Testament…

Item I give and bequeath unto Johan Coffyn my Wife ye issues pfitts and comodities of all my lands tenements & hereditaments wth in ye sayd Parish of Brixton dureing her widdowhood she yeelding and payinge therefor yearly unto the sayd Tristram my Sonne his heirs and assignes the summe of Fifty shillings of lawfull English money at ye four most usual feasts of the year and also sufficient meat drink & clothes and convenient lodgings unto ye sayd Tristram according to his degree and callinge dureing her Widdowhood onely And if it happen ye sayd yearly rent of Fifty shillings or any part thereof to be behinde and unpayd that then and from thenceforth itt may and shall be lawfull to and for the sayd Tristram Coffyn his heirs and assignes unto all and singular the said prmises to enter and distraine and the distress so there taken from thence to lead drive carry away & empound and impound to detaine and keepe untill ye sayd rent of Fifty shillings with the arrearages of the same (if any bee) shall bee to him or them fully answered and payd. And further it is my Will that if the sayd Johan my Wife shall happen to marry that she shall immediately thereupon loose all ye pfitts commodities and right of that one tenement called Silferhey lying in Butlers in ye parish of Brixton aforesayd which duringe her Widdowhood by my Will she is to have and ye same to redound & be immediately in the possession of my Sonne Tristriam his heirs and assignes

Itm I give and bequeath unto John Coffyn my Sonne Fourty pounds in money to be payd him when hee shall be of the age of twenty years.

Item I give & bequeath unto the child wc my Wife now goeth withal the sume of Thirty pounds in money to be payd when he or she shall be of the age of twentie years. Provided always & my mind & will is that if either Johan Coffyn Deborah Coffyn Eunice Coffyn Mary Coffyn John Coffyn of ye child my Wife goeth withal happen to dy before he she or they doe come to ye age of twenty years that then his her or their portion or portions shall be equally divided amongst the survivors

The Tristram Coffin House is the oldest structure in the Newbury Historic District. Built in 1654 by one of Newbury’s first settlers, Tristram Coffin, the House represents one of the outstanding examples of First Period architecture in New England.

The House was continuously occupied by the Coffin family from 1654. The seven succeeding generations of occupants participated actively in the socio-economic, political and educational life of the town. The Coffin House has a number of outstanding features including the original kitchen, a rare 18th-19th century built-in dresser, 18th century chamber with plaster of clay and straw with exposed boards, a buttery with pine woodwork preserved in its original state, and a collection of Coffin family furniture.

Tristram Coffin moved to Nantucket Island in 1659 with his wife, his mother, and some of his children.  In 1671, he was appointed as Chief Magistrate of Nantucket.  Tristram Coffin Sr. was  a Royalist by education and environment.

Tristram Coffin sailed to America from Devon, England in 1642. He became one of the original purchasers of Nantucket Island in 1659. At one time, with his sons, he owned one quarter of the island. He became Chief Magistrate and was viewed by the other settlers as the patriarch of the island. The historian Benjamin Franklin Folger said of his service as Chief Magistrate that he always exhibited a fair Christian character “in all the varied circumstances and conditions of that infant colony,” both to Indians and white settlers.

One of these sons was the famous Tristram Coffyn, the ancestor of the numerous families of the name now in this country.  Nearly all his descendants are enabled, by means of the accurate genealogical records in existence, to trace their linage back to him, although nearly two centuries have elapsed since his death.  He was born at Brixton, near Plymouth, in the County of Devonshire, England in the year 1605 (another account say 1609), married Dionis Stephens, and in 1642 came to New England, bringing with him his wife, mother, two sisters and five children.  The names of these children were Peter, Tristram, Elizabeth, James and John.  He first settled at Salisbury, Mass, thence moved the same year to Haverhill, where his name appears on the Indian Deed of that town, November 16, 1642, and where his children Mary Starbuck and John (the first John having died at the same place in 1642) were born.  In 1648 he removed to Newbury, where his youngest son, Stephen was born.  After residing there several years (during which time he was licensed to keep an inn and a ferry over the Merrimac River), he returned to Salisbury, where he became a county magistrate, and in 1660 or 1661 he abandoned New England, and with his wife, four children and his aged mother settled upon the island of Nantucket.  Prior to his last removal (and early in the year 1659), he made a voyage of inquiry and observation to the group of islands off the Massachusetts coast, with a view to this change of residence.  He first visited Matha’s Vineyeard, and taking from there Peter Folger, the grandfather of Benjamin Franklin, as an interpreter of the Indian language, proceeded to Nantucket.  It has been supposed that religious persecution was the cause of these frequent changes and of his final departure from the main land.

He was one of a company of ten who first purchased Nantucket from the Indians, which factg appears in a conveyance from the Sachems, Wanackmamack and Nickanoose, dated May 10, 1660.  The original manuscript of this instrument is still extant, bearing the signature of Peter Folger as one of the witnesses to its execution.  Prior to this purchase from the natives, the English title to the greater portion of the island had been obtained from Thomas Mayhew, who held the same under a conveyance from Lord Stirling.  The deed from Mayhew is dated July 2, 1659, and runs to the grantees in the following order, viz: Tristram Coffin, Thomas Macy, Christopher Ilussey, Richard Swaine, Thomas Barnard, Peter Coffin, Stephen Greenleaf, John Swaine and William Pike.

Tristram Coffin and his sons at one time owned about one-fourth of Nantucket, and the whole of the little island adjacent to it on the west, called Tuckermuck, containing 1,000 acres, which he purchased of the old Sachem Potonet at the time of his visit in 1659.

He appears to have been a leading spirt among the first settlers, and was frequently selected by the inhabitants to transact important public business.  His letters to the Colonial Government of New York (Nantucket was at that time a dependency of New York), are preserved in the Archives of the Department of State at Albany.

“At a Court of Sessions held the 29th of November 1681 there granted administration unto me Jamews Coffin, John Coffin and Stephen Coffin on the estate of Mr. Tristram Coffin deceased the 3rd Oct 1681 they having given security according to law.”

The body of the Oath was evidently written by Peter Coffin (son of Tristram), the signature is an autograph.  It will be observed that Tristram used the letter ‘y’ instead of ‘i’ in writing the family name.  It is said, whether truthfully I do not know, that his ancestors spelled it in the same manner.  The letter of administration appended to the bond fixes the date of his death (Oct 3, 1681) beyond question.

The original pieces were struck by Sir Isaac Coffin, a Boston-born British Navy captain who founded a sailing school on Nantucket in 1826, long after he followed his Loyalist leanings to England. The medals were struck to mark the school’s founding and were distributed on Nantucket. One is known brightly gilt in its original presentation case — it was in Lucien LaRiviere’s collection and is now at Colonial Williamsburg. After the original struck medals were produced in 1826, the medal was cast and recast for family reunions on Nantucket, perhaps even as late as the first few decades of the 20th century.

In the year 1826, Sir Isaac Coffin, a native of Boston (who went to England in early life and became a Baronet, and an Admiral in the British Navy), visited Nantucket and founded the ‘Coffin School’, which is still flourishing.  The Act of Incorporation provides for the establishment of a school by the name of Admiral Sir Isaac Coffin’s Lancasterian School, for the purpose of promoting decency, good order and morality, and for giving a good English education to youth who are descendants of the late Tristram Coffin who emigrated from England” etc.  The act further provides that the Trustees shall all be the descendants of the above mention Tristram Coffin in the male or female line.

Children of Tristram and Dionis:

“The expedition under Sir William Phips, consisting of thirty or forty vessels, carrying about two thousand men, sailed from Nantasket on the ninth day of August, 1690, but did not arrive at Quebec until the fifth day of October. Several attempts were made to capture the town, without success; and, tempestuous weather having nearly disabled the vessels and driven some of them ashore, it was considered advisable to re-embark the troops and abandon the enterprise. On their way back to Boston, they encountered head winds and violent storms. Some vessels were blown off the coast, and ultimately arrived in the West Indies. One was lost upon the island of Anticosti, and several were never heard from. Capt. John March, Capt. Stephen Greenleaf, Lieut. James Smith, Ensign William Longfellow, and Ensign Lawrence Hart, of Newbury, Capt. Philip Nelson, of Rowley, and Capt. Daniel King, of Salem, were among the officers commissioned for service in the expedition to Canada, under the command of Sir William Phips.”

Became known as “The Great Mary” of Nantucket. She is said to be a most extrordinary woman who participated in public gatherings, Town Meetings which were frequently held in her home. For several years meetings for workshops were held in the “great fore-room” of her home known as ‘Parliament House’ situated on what is now known as Island View farm between the Macy’s and the North Head of the Hummock ponds. She was a Quaker leader and helped establish a Meeting on the island in 1701. The first Friends Society was formed in 1704 and the first meeting house was built in 1711. The Nantucket Monthy Meeting was established on May 16, 1780. She was a minister in the Society as were her children and her grandsons, Elihu COLEMAN (published one of the earliest protests against slavery) and Nathaniel Coleman, and her granddaughter, Priscilla BUNKER.

Deborah Austin was born about 1650.  Her parents were Joseph Austin and Sarah STARBUCK.

Alexander Adams was a shipwright

This entry was posted in Research and tagged The Hector 1642. Bookmark the permalink.