Posted on February 8, 2013 by markeminer 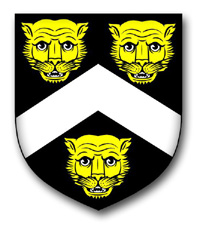 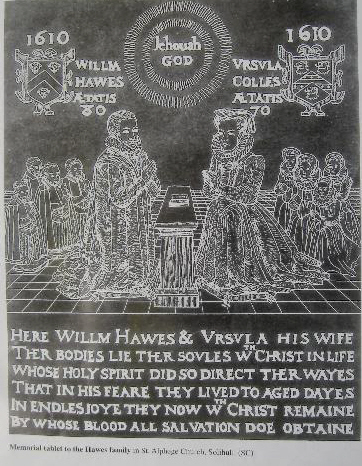 Copy of William Hawes Brass from a copy in the Solihull library that was easier to read, primarily because we could get closer to it!

St. Alphege Church is medieval. The previous spire was 59m and collapsed in 1757: the current spire is 57.34m The Church, dedicated to St. Alphege, is a large cruciform structure. The tracery mouldings and corbels in the interior are extremely elegant; there are also some fine specimens of screen work: it consists of nave, chancel, side aisles, and an embattled tower, surmounted by an octagonal spire, and contains a peal of thirteen good bells.

Children of William and Ursula Given in Order of the Visitation of Warwickshire: 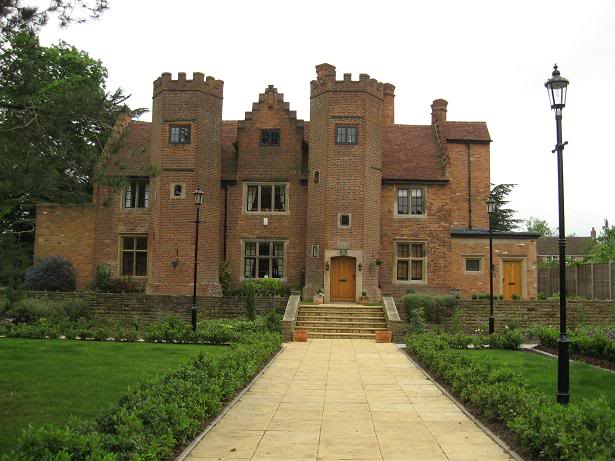 Hillfield Hall was built for William and Ursula Hawes in 1576. It remained in the family until the 1660s, at which time it was owned first by the Feildings, and later by the Greswolds.

More recently, it became a nightclub (1964) and then a restaurant (1974), and now it has been converted into apartments. The main house was divided into 3 units with a total asking price of 2 million pounds. To the left, with a side entrance, is The Tower.

Above the main doorway remains the Latin inscription Hic Hospites in Caelo Cives (Here we are guests, in Heaven citizens), along with the initials of William and Ursula Hawes, and 1576.

Perpendicular to the main house, these existing buildings were also converted into 3 residences. Back when the house was a restaurant, at least some of this property was a bar called The Stable, so you can probably guess its original use.

New housing was built on the rest of the land, for a grand total of 19 units. It would be fun to live there now, but it would be even more exciting to go back in time and see Hillfield Hall in 1576!

The present house was built by William Hawes in 1576 and descended through the Hawes Family to the Fieldings and then the Greswoldes.  The south front of the Hall was destroyed by fire in 1867 but was rebuilt.  The Hall became a restaurant in 1974 and was recently converted into three apartments. 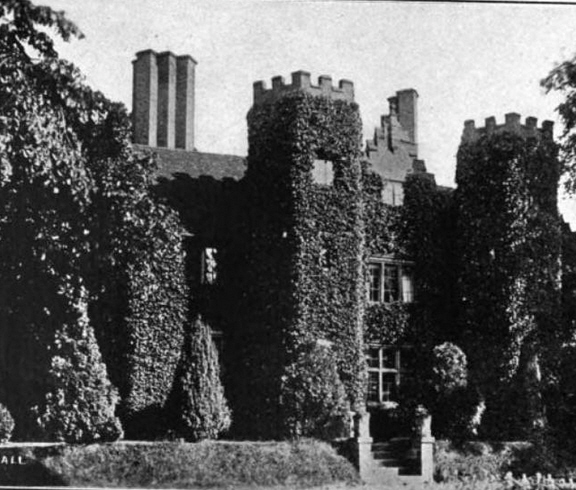 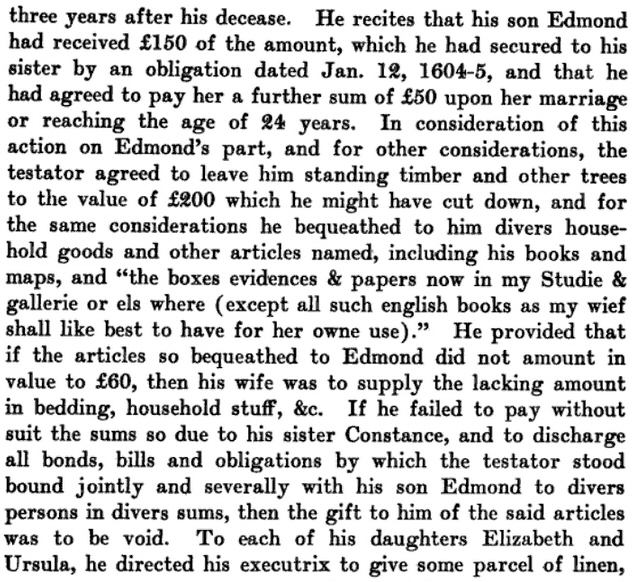 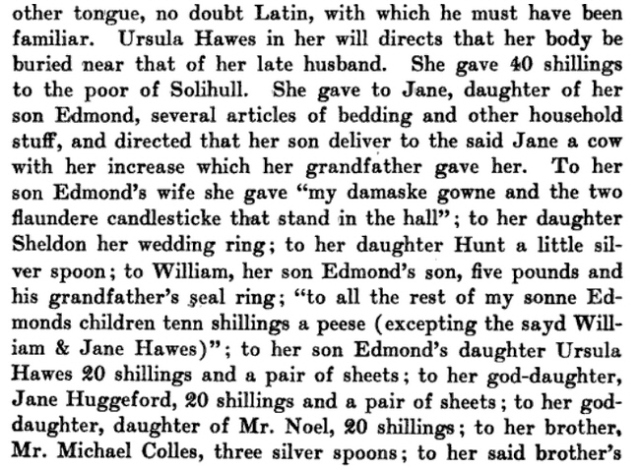 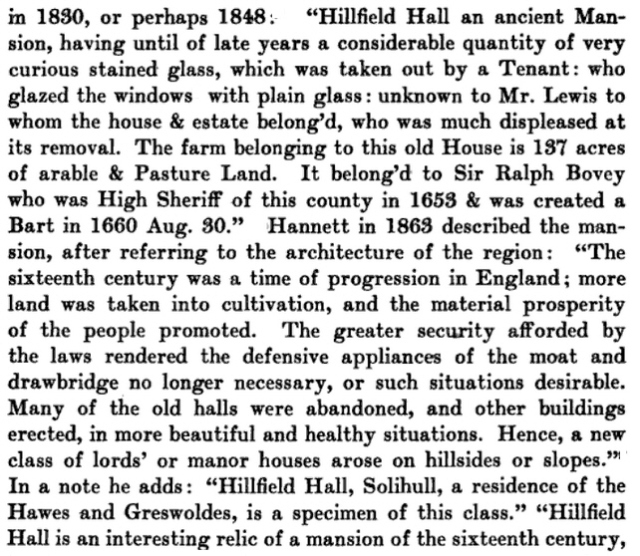 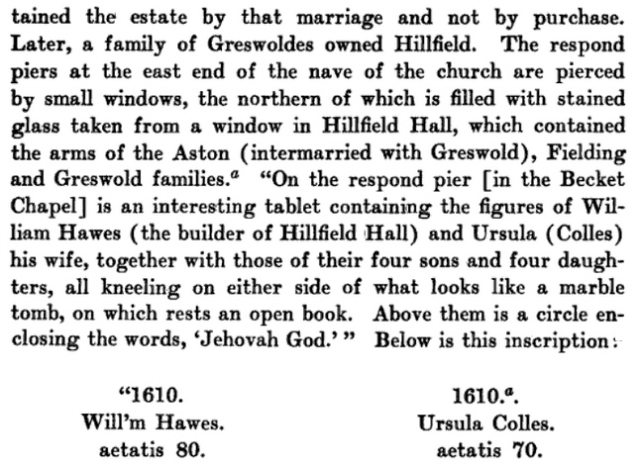 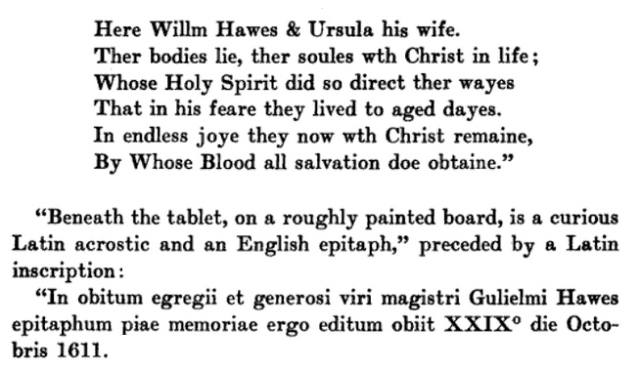 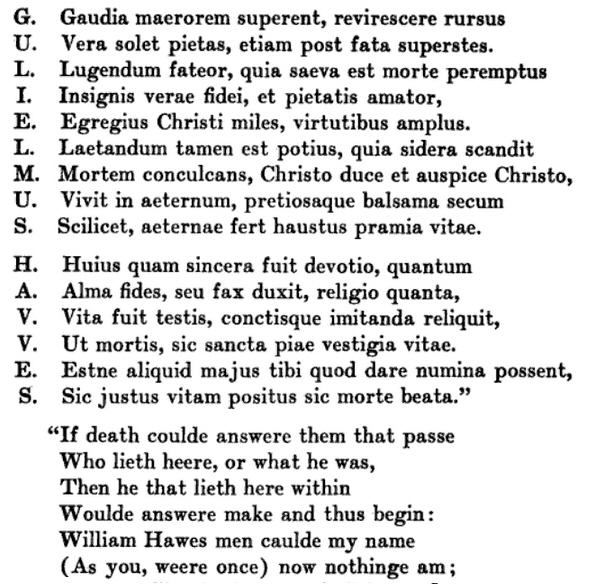 St Alphege Church – Between the north porch (right) and the north transept (left), you can see 2 nave windows. The one on the left looks into St Thomas a Becket’s Chapel (below). This used to be the location of the Hawes’ family pew. It was not the ideal place to view a service – the stained glass panel on the right was formerly a small opening through which to look. However, it was the ideal place – in front of all the other pews – to emphasize your wealth and status. 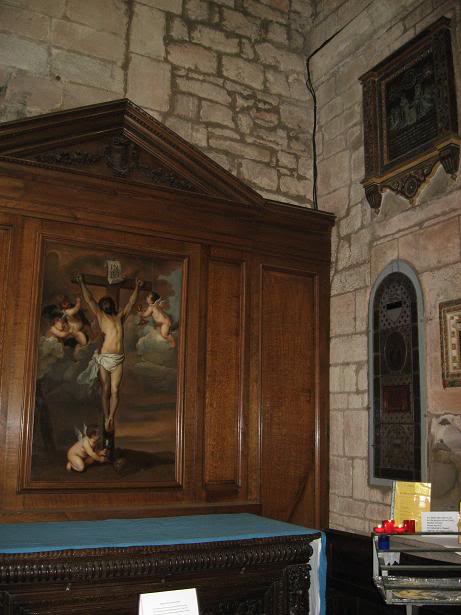 Above the stained glass panel is a Jacobean monument containing a brass, dated 1610, to William and Ursula Hawes. It was restored in the 1990s by American relatives. 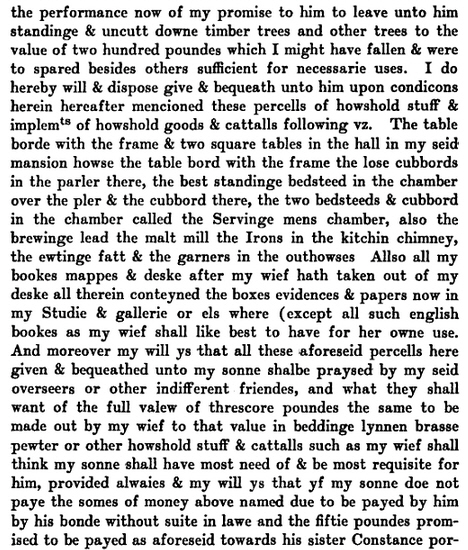 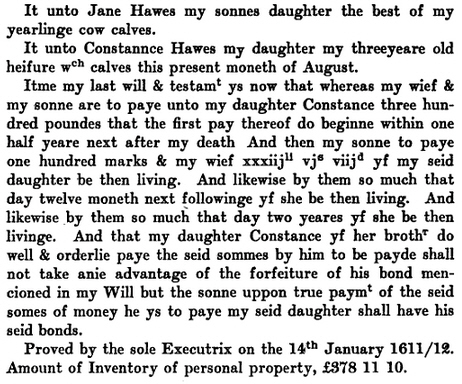 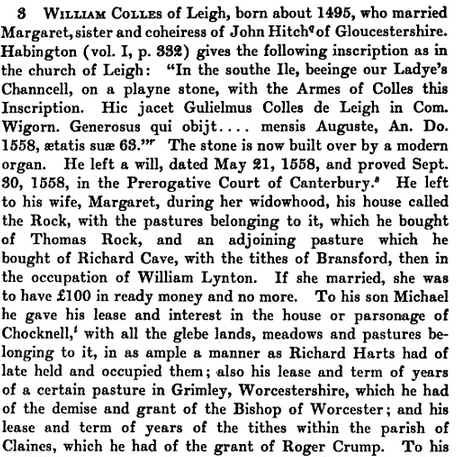 Children Given in Order of the Visitation of Warwickshire

Died without issue before his father

Died without issue before his father

Edmond Hawes of Yarmouth, Massachusetts: an emigrant to America in 1635, his ancestors, including the allied families of Brome, Colles, Greswold, Porter, Rody, Shirley and Whitfield; and some of his descendants  By James William Hawes  1914   —
A genealogy of this  immigrant and his descendants, with extensive information on the English origin, including the apprenticeship in London, and with full transcripts of many important documents