Lois Danforth was born  19 JUN 1743 in Newbury,, MA. Her parents were Samuel DANFORTH and Mehitable BROWN.  Lois died a few days after her husband  3 Oct 1823 in  Vassalboro, Maine.

Children of John and Lois:

John Coleman lived nearby during Battle of Bunker Hill – Boston.  John’s son Joseph, 9 yrs old, was awakened the night before  by the sound of his father and other men “running bullets and making cartridges for use in the anticipated battle.”

Battle of Lexington and Concord

On the night of April 18, 1775, General Gage sent 700 men to seize munitions stored by the colonial militia at Concord, Massachusetts. Riders including Paul Revere alerted the countryside, and when British troops entered Lexington on the morning of April 19, they found 77 minutemen formed up on the village green. Shots were exchanged, killing several minutemen. The British moved on to Concord, where a detachment of three companies was engaged and routed at the North Bridge by a force of 500 minutemen. As the British retreated back to Boston, thousands of militiamen attacked them along the roads, inflicting great damage before timely British reinforcements prevented a total disaster. With the Battles of Lexington and Concord, the war had begun.

John made several journeys to Vassalboro before settling there with his son Joseph. John emigrated with his family from Byfield Massachusetts to Vassalboro, Maine behind a yoke of oxen. Today, you can make the 144 mile trip by car, cruising up I95 in two and a half hours. I wonder how long it took at oxen pace.  They were among the earliest settlers of Vassalboro, Maine in the later part of the 1700′s.   They settled in the vicinity of Webber Pond where Joseph reared a large family.

Mrs. Colman gave me a cordial, and Mr. Colman a rapturous greeting. ” Had he not always promised that I should be David’s little wife ? ” I was introduced to Mr. and Mrs. John Colman. John, the oldest son of Deacon Colman, had married a lady by the name of Danforth. This couple signalized themselves by their migratory life, during which they made thirty-two removals. Some half dozen of these were between Byfield and Maine. Mrs. Colman used to boast that she had crossed the ocean between Newburyport and the District of Maine fourteen times, and she would add, “the happiest time in my life was when I was midway in these removals ; at that point I was rejoicing at having left the old place and looking forward with hope to the new.”

As was natural, these rolling stones gathered little moss, but always sanguine and cheerful, they passed as happy and contented a life as either of the family. At this time the}* were paying a farewell visit to their brother prior to one of their Sittings eastward.

John not only led the church choir, but composed many hymns and anthems.  At the same time he was eminently practical and is said to have made the first pair of cart-wheels in Vassalboro.  He was a devout Christian and read the Bible through in course scores of times in his family reading.

In the 1850 census, Thomas was 78 years old and living with his son Thomas W. Coleman in Auburn, Rockingham, New Hampshire.

Thomas was a man of gigantic proportions being over six feet in height and weighing two hundred and fifty pounds.  He lived to be nearly eighty-five years of age and died at the home of his son Thomas W. Coleman

Children of Thomas and Abigail:

In the 1850 census, Benjamin was a carpenter in Campton, Grafton, New Hampshire with three children at home ages 13 to 25. 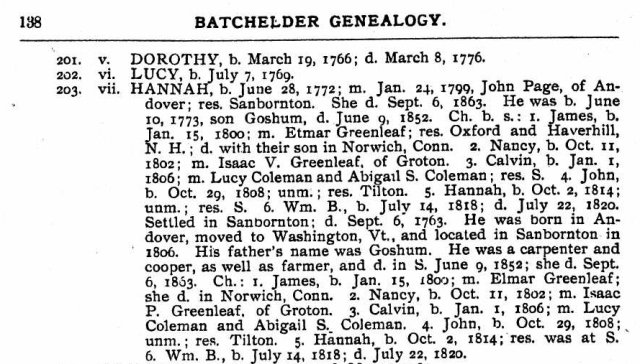 In the 1860 census, Thomas was farming in Auburn, Rockingham, New Hampshire.

In the 1850 census, Calvin was a cabinet maker in Sanbornton, Belknap, New Hampshire.

In the 1870 census, Alfred and Sarah were farming in Auburn, Rockingham, New Hampshire.