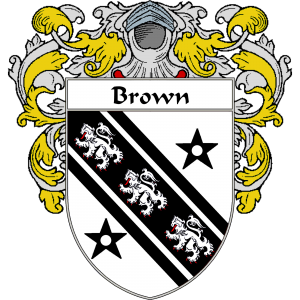 We have five separate Brown lines and seven different Brown immigrant ancestors, by far the most of any surname.  When the surname is of English origin it is derived from a nickname concerning the complexion of an individual, or the colour of their hair. Brown is derived from the Old English brun, brūn; Middle English brun, broun; or Old French brun.

John Brown was born about 1620 in  England, though estimates of the date are all over the map.

His parents were John BROWNE Sr. and Dorothy BEAUCHAMP .  He emigrated with his parents, brothers William and James and sister Mary sailing from London, 22 June 1632, on the Lyon, William Pierce, Master.  The ship arrived in Boston on 16 Sep 1632, twelve weeks from London and eight weeks from Land’s End.   John married Anne Dennis in 1646 or 1649 in Taunton, Bristol, Massachusetts.  This marriage has not been proven as far as far as I know.  After Anne died, he married Martha THOMPSON about 1650.  He then married Lydia Buckland on 5 Nov 1659 in Rehoboth, Mass.  John, Jr’s will is dated “the last day of March 1662” and was presented to the Plymouth Colony Court on April 19, 1662. So he died between those two dates.

John’s father John Sr. died ten days after his son John Jr.   In his will, John Sr left will 1,700 acres of Narragansett lands to the children of his son John Jr., and he was able to leave a large estate valued in the inventory of 19 April 1662 at £665.1s.2d, but including only £6  in cash!  He left his daughter Mary Willett only 12d “to bee payed att the end of every yeare During her life for a memoriall unto her; and it shalbee in full of all filiall portion which shee or any in her behalfe shall Claime”..

Anne Dennis was born about 1629 in Suffolk, England. Her parents were William Dennis and Jane Scarlet. Anne died in 1650 or 1652 in Rehoboth, Bristol, Mass.

Martha Thompson was baptizd 17 Dec 1626 in Preston, Northamptonshire, England. She was a sister of the first wife of George Denison of Roxbury, whose daughter Margaret [by his second wife] m. James3 Browne, Jr. [French, MQ, 50:8]; a Martha Browne d. 14 Feb. 1660. However, Gary Boyd Roberts identifies the Rev. William Thompson [the missionary to the Pequots, who later dropped the “h” in his name]’s known dau. Mary [dau. of as Alice (Freeman)(Tompson) Parke] having m. in Roxbury Joseph Wise), Martha died 14 FEB 1660 in Wannamoisett, Mass.

Phebe Harding did not marry either of the Rehoboth John Brown(e)s, Jr, or Sr. She married the John Brown(e) of Duxbury, brother to Peter Browne, of the Mayflower on 26 Mar 1634 in East Bridgewater, Plymouth. This information has been published in various articles in the NEHGR and Mayflower Descendant.

Lydia Buckland was born about 1632 in England.  Her parents were William Buckland and Mary Bosworth.  When John died, Lydia married Lt. William Lord on 3 Jun 1664 in Rehoboth Mass and had eight more children.  She married Thomas Dunk in 1679 in Saybrook, Middlesex, CT.   Finally, Lydia married Lt. Abraham Post in Mar 1684 in Saybrook where she died on 24 Sep 1700.

William Lord was born 1623 at England. He came in the Elizabeth and Ann, 1635 with his father Thomas Lord at age 12 and lived in Hartford, CT. He first married about 1642, possibly Hattie Nickerson and settled in Saybrook, CT, about 1645. He was there at the division of lands in 1648 and became a large landowner in Saybrook and also in Lyme. he bought a large tract from the Indians in Lyme which land was subsequently exchanged with the town for various other parcels by his sons Thomas and Richard. He obtained for the town of Lyme the tract of land that afterwards made the town of Salem, CT: in April 1669, Chapeto, a kinsman of Uncas, gave to William Lord of Lyme, eight miles square; subsequently known as the Paugwonk lands, and appears to have included all or nearly all of the present township of Salem; this deed was confirmed to his sons in 1681. William died 17 May 1678 at Saybrook, CT. 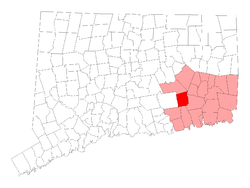 Lydia’s fourth husband Abraham Post was born 1627 in Otham, Kent, England. His parents were Lt. Stephen Post and Eleanore Langley. He came to America with his parents in the ship “Griffin” arriving in Boston on Sep 4, 1633. His father Stephen was a carpenter and a follower and adjerent of the Rev. Thomas Hooker. His name appears on the monument as one of the founders of Hartford, CT. Abraham first married in 1649 in Lyme, CT to Eleanor [__?__].  He next married in 1663 in Saybrook CT to Mary Jordan (1644 – 1683).  Finally, he married Lydia Buckland in 1684. Abraham died 15 JAN 1714 in Saybrook, Middlesex, CT.

Hooker arrived in Boston and settled in Newtown (later renamed Cambridge), where he became the pastor of the First Parish Church. His parish became known as “Mr. Hooker’s Company”.  Voting in Massachusetts was limited to freemen, individuals who had been formally admitted to their church after a detailed interrogation of their religious views and experiences. Hooker disagreed with this limitation of suffrage, putting him at odds with the influential pastor John Cotton. Owing to his conflict with Cotton and discontented with the suppression of Puritan suffrage and at odds with the colony leadership, Hooker and the Rev. Samuel Stone led a group of about 100, including the Posts who, in 1636, founded the settlement of Hartford, named for Stone’s place of birth: Hertford, in England.

Child of John and Anne Dennis

Children of John and Martha Thompson:

Child of John and Lydia Buckland

John was married more than once. This fact is established by a statement of his brother James Browne in which he refers to John’s oldest child, “as my loving nephew, John Brown” ‘eldest son of my brother John by his first wife”

In the little book previously mentioned, reference is made to a deed in which the following language appears in reference to John Browne Jr., ”John Jr. had 2 sons by

his first wife of which John was the eldest.” John Browne Jr.’s second son was Joseph; he was born April 9, 1658. Therefore his marriage to his second wife, Lydia Buckiand, must have occurred subsequent to April 9, 1658.John Browne Jr., in his will, made last

It is highly probable that if the marriage portion was to be paid in 1660, the marriage was celebrated not long before that time.

It is certain that the eldest child John Browne [III] was by the first wife. John Browne, Jr., was first appointed Ensign March 20, 1653, and was again appointed in 1654 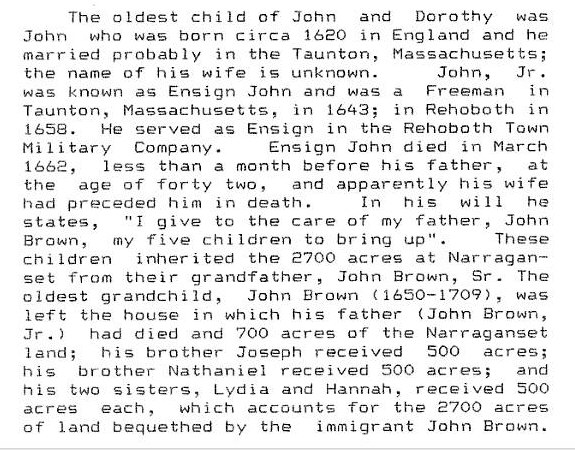 James Browne mentioned “my loving nephew John Brown, grandson and eldest son of my brother John Brown by his first wife, one half of all the lands my father had given her which was the real intent of my father’s last will.”

Know all men that I John Browne of Wannamoisett in the Jurisdiction of Plymouth being sicke but in  pfect memory Doe leave this my last Will and Testament in manner and forme as followeth; wheras  my fatherinlaw William Buckland standeth engaged unto mee in the sume of three score pounds  which was to bee for the portion hee was to give mee in marriage with my wife and was to bee  payed mee in the yeare 1660: this sume which is now in my fatherinlaw his hand I Doe give unto my wife for her better preferment Desiring that my fatherinlaw would bee Carfull to pay it;

and morover I Doe give unto my wife; the like sume of threescore pounds to bee payed unto her by my Exequitor  out of my estate and I Doe give unto my eldest son John Browne my little mare that is now great with  foale as alsoe yearling Coult shee brought forth the last yeare; and one yeoke of oxen; and such Iron  or Iron takeling as is ptable betwixt my brother James and my selfe I Doe give my pte unto my son  John Browne;

and Conserning all my five Children I Doe wholly leave them all to the ordering and  Dispseing of my owne father Mr John Brown for him to bring them up not once questioning but that  his love and Care for them wilbee as it hath bine for my selfe; and for all the rest of my estate I Doe wholly leave unto him to Dispose amongst them as in his Descretion hee shall see meet; and I Doe  leave my said father mr John Browne sole executor of this my last Will; In Wines wherof I have sett to my hand and seale this last Day of march in the yeare 1662

Signed Sealed and Delivered John Browne
in the prsence of and a seale
Thomas Willett
John Allin;

John Browne, Jr., died 31 March 1662, in his will leaving the care of his family to his father, John’ Browne, the prominent magistrate of Rehoboth.

That father, however, survived the son but a few days, dying on 10 April the same year, and John’s brother James assumed the guardianship of the children. In the will of John Browne, jr., he left to his wife the money which his “father-in-law William BUCKLAND standeth engaged to me in the sum of three score pounds, which, was to be for the portion he was to give me on marriage with my wife, and was to be paid to me in the year 1660.” Some infer from this that Lydia Buckland married John Browne about 1660, but it is to be noted her father only pledged her marriage portion at the time of her marriage, to be paid in 1660. This was evidently not paid before John Browne, Jr.’s will was written, but was receipted for on 26 June 1663; “I Lidia Brown the late wife of Mr. John Brown Junr. lately deceased, do acknowledge that I have received of my Brother James Brown the sum of Three score pounds to my satisfaction which was left me by my husband. The mark of Lidia M Brown.”

Passengers on the “Lion” From England to Boston, 1632, and five generations … By Sandra Sutphin Olney

This entry was posted in 12th Generation, Immigrant - England, Line - Shaw and tagged Most Popular Surname, Rehoboth. Bookmark the permalink.