Our ancestors, noted below by Bold CAPITALS, played every role in the 17th Century Witch Trials: Accused, Accuser, Witness, Neighbor, Jury and the Law.  Seeing all their stories together, shows that the witch trials weren’t an isolated incident.  Since all the players were family, the message I get is that everyone in their society was responsible for what happened.

It is generally accepted that the Salem trials were one of the defining moments that changed American jurisprudence from the English system of “guilty, ’til proven innocent” to the current American system of “innocent until proven guilty”. In addition, the jury pool in trials was changed from “church-members only” to “all those who have property” in an act which was passed by the General Court on 25 Nov 1692. Finally, these cases caused Americans to take their first steps away from what we now know as “cruel & unusual punishment” when trying to get someone to confess. It had been a staple of the English legal system, but after 1692 even Cotton Mather urged judges to use “Crosse and Swift Questions” rather than physical torture to gain the truth. These were three significant changes to the nascent American legal system. In May of 1693, Governor Phips pardoned the remaining accused of witchcraft.

It was dangerous to be a supporter of a witchcraft defendant.  Friends and relatives were often accused themselves.

I. Petition in Support of John and Elizabeth Proctor

The Humble, & Sincere Declaration of us, Subscribers, Inhabitants, in Ipswich, on the behalf of o’r Neighb’rs Jno Procter & his wife now in Trouble & und’r Suspition of Witchcraft.

Too the Hon’rable Court of Assistants now Sitting In Boston. —

The foresd John Procter may have Great Reason to Justifie the Divine Sovereigntie of God under thos Severe Remarques of Providence upon his Peac & Hon’r und’r a due Reflection upon his Life Past: And so the Best of us have Reason to Adoar the Great Pittie & Indulgenc of Gods Providenc, that we are not Exposed to the utmost shame, that the Divell can Invent und’r the p’rmissions of Sovereigntie, tho not for that Sin fore Named; yet for o’r many Transgretions; for we Do at present Suppose that it may be A Method w’thin the Seveerer But Just Transaction of the Infinite Majestie of God: that he some times may p’rmitt Sathan to p’rsonate, Dissemble, & therby abuse Inocents, & such as Do in the fear of God Defie the Devill and all his works. The Great Rage he is p’rmitted to attempt holy Job w’th The Abuse he Does the famous Samuell, in Disquieting his Silent Dust, by Shaddowing his venerable P’rson in Answer to the harmes of WitchCraft, & other Instances from Good hands; may be arg’d Besides the unsearcheable foot stepps of Gods Judgments that are brought to Light Every Morning that Astonish o’r weaker Reasons, To teach us Adoration, Trembling. & Dependanc, &ca but —

We must not Trouble y’r Honr’s by Being Tedious, Therefore we being Smitten with the Notice of what hath happened, we Recoon it w’thin the Duties of o’r Charitie, That Teacheth us to do, as we would be done by; to offer thus much for the Clearing of o’r Neighb’rs Inocencie; viz: That we never had the Least Knowledge of such a Nefarious wickedness in o’r said Neighbours, since they have been w’thin our acquaintance; Neither doe we remember — any such Thoughts in us Concerning them; or any Action by them or either of them Directly tending that way; no more than might be in the lives of any other p’rsons of the Clearest Reputation as to Any such Evills. What God may have Left them to, we Cannot Go into Gods pavillions Cloathed w’th Cloudes of Darknesse Round About.

But as to what we have ever seen, or heard of them — upon o’r Consciences we Judge them Innocent of the crime objected.

His Breading hath been Amongst us; and was of Religious Parents in o’r place; & by Reason of Relations, & Proprties w’thin o’r Towne hath had Constant Intercourse w’th us

We speak upon o’r p’rsonall acquaintance, & observations: & so Leave our Neighbours, & this our Testimonie on their Behalfe to the wise Thoughts of y’r Honours, & Subscribe &c.

Signatures on Petition for John Proctor 1 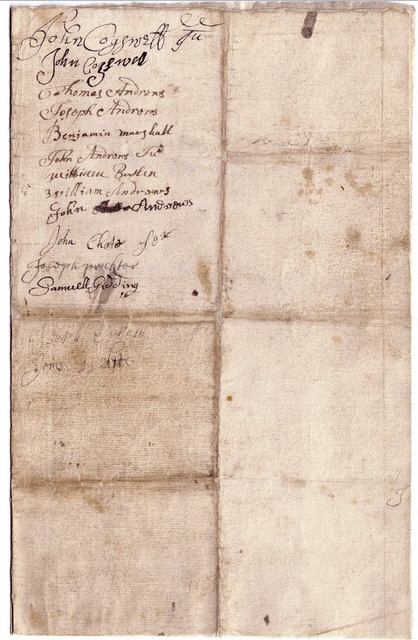 Signatures on Petition for John Proctor 2

The historian of the Salem witchcraft delusion says that “not a voice comes down to us of deliberate and effective hostility to the movement, except that of Robert Pike in his cool, close and powerful argumentative appeals to the judges who were trying the witchcraft cases. It stands out against the deep blackness of those proceedings like a pillar of light upon a starless Midnight sky.” 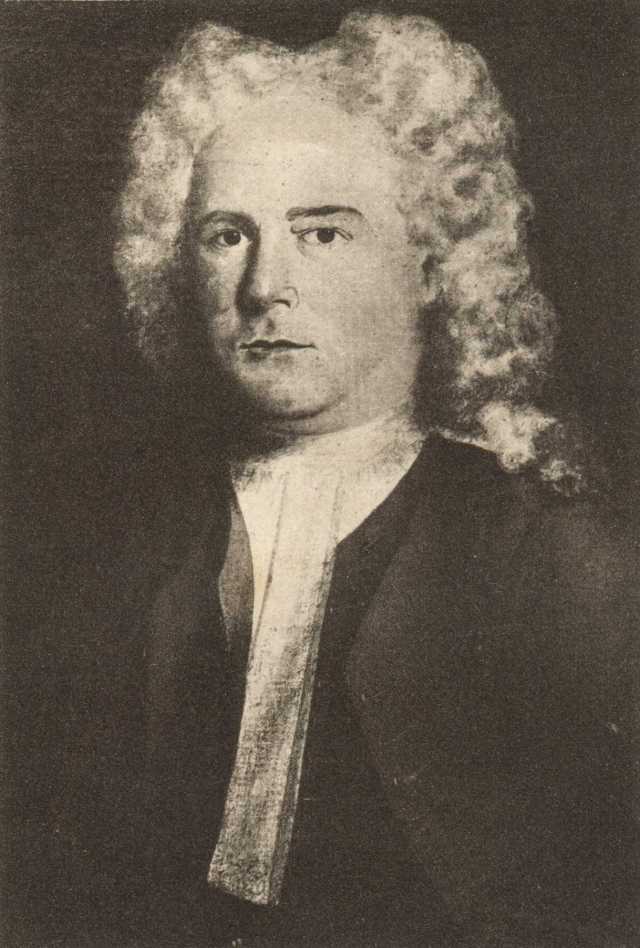 Confronting the judges stood this sturdy old man, his head whitened with the frosts of seventy-six winters and protested that there was no legal way of convicting a witch, even according to the laws and beliefs of those times. It required no small amount of courage for him to take the stand he did against the opinions of the highest judicial tribunal in the province when no one was safe from the charge of having dealings with the evil one, and he himself might be the very next one accused of being a witch! But having the courage of his convictions he rose to the demands of the situation and proclaimed his opposition by a formal and thorough exposition: The great merit of this position, so far as it has come down to us, belongs entirely to him, and no man of his time is entitled to greater honor. It is a marvel how he breasted the storm when any resistance to the popular demamd was deemed evidence of complicity with the witches, imps and all the powers of darkness, to overthrow the true church on earth.

He defended and plead the cause of several of the accused, among whom were Mrs. Mary Bradbury, (daughter of John PERKINS) who was condemned but not executed, and Susanna Martin (wife of George MARTIN), whose memory is perpetuated by John Greenleaf Whittier, the poet.

[Whittier wrote: “From all that I have read, and from the traditions of the valley of the Merrimac, I have been accustomed to regard Robert Pike as one of the wisest and worthiest of the early settlers of that region. . . . He was by all odds the most remarkable personage of the place and time.”]

An Aug 9 1692 letter  to  Jonathan Corwin, one of the trial judges, signaled the end of the Salem hysteria.  Most historians think the letter was written by Robert Pike,

Robert Pike had a long history of opposing religious tyranny, for example, denouncing the law forbidding to preach if not Ordained in 1655, but the actual letter just contains the initials “RP” and the name Robert Payne, (foreman of the Grand Jury that returned the Witch Trial indictments and grandson of William PAYNE)  was added later in a different hand, so an early record keeper thought this Robert wrote it.  Here is a detailed discussion of who wrote the letter and here is another.

The letter is a tightly reasoned attack upon the use of spectral evidence and the testimony of the ‘afflicted girls’ in general. While the author, like all Puritans, believed witches and witchcraft existed and were the work of Satan, he was questioning the current methods of the court in determining credibility and guilt.   The letter makes several points:

It is not known just how the letter was received, since there is no written response, but with it he became one of the first of several prominent men to question the handling of the witchcraft crisis. Within a few weeks Thomas Brattle and Samuel Willard of Boston wrote their own manuscripts, using some of the same arguments Pike had documented. By October of 1692 the activity of the courts was greatly diminished, the executions had ended, and the witchcraft crisis was effectively over.

Elizabeth Howe was one of those  accused of witchcraft

The Perely family of Ipswich, Massachusetts, was among the chief accusers of Elizabeth Howe. They had a ten year old daughter they claimed was being afflicted by Howe. This was due, they claimed, to the fact that they had thwarted Elizabeth Howe’s chance of becoming a member of the Ipswich Church.  The child complained of being pricked by pins and sometimes fell into fits.  In their testimony against Howe, on June 1, 1692, the Perelys quoted their daughter as saying, “I could never afflict a dog as Good Howe afflicts me.” At first the parents did not believe their daughter’s accusations. They took the child to several doctors who told them she was “under an evil hand”.  Her condition continued for two or three years, until “she pined away to skin and bones and ended her sorrowful life”.

31 May 1692 – When Elizabeth Howe was brought in for examination Mercy Lewis  and Mary Walcott  two of her main accusers, fell into a fit. She was accused by Mary of pinching and choking her in the month of May. Ann Putnam, Jr.  added her accusations to these by saying she had been hurt three times by Howe. When asked how she pled to the charges made against her, Elizabeth Howe boldly responded, “If it was the last moment I was to live, God knows I am innocent of any thing of this nature”.

3 Jun 1692 – Having witnessed a conversation between Samuel Perley’s little girl and Elizabeth Howe. Reverend Phillips of Rowley testified in her defense.

In her defense, Elizabeth Howe’s father-in-law testified to her good nature. He said that she, “[set] a side humain infurmitys as [become] a Christion with Respact to [himself] as a father very dutifully & a wifife to [his] son very carfull loveing obedient and kind Considering his want of eye sight.” He concluded his witness by saying, “now desiering god may guide your honours to se a difference between predigous and Consentes I rest yours to Sarve”

Deborah Prince was daughter of Thomas PRINCE and Mary PATCH and second wife of George HADLEY .  George’s  first wife Mary PROCTOR was the brother of John Proctor who was accused of witchcraft, convicted and hanged 19 Aug 1692.  Deborah was a witness in support of her neighbor Elizabeth Howe accused in the Salem Witch trials.

The deposition of Deborah Hadley, aged about seventy years: This deponent testifieth that and sh. that I have lived near to Elizabeth Howe (ye wife of James Howe Jr of Ipswich) 24 year and have found her a neighborly woman, conscientious in her dealings, faithful in her promise, and Christianlike in her conversation so far as I have observed and further saith not.”

25 Jun 1692 –  John WARNER, his brother Daniel and Daniel’s wife Sarah wrote this petition in support of  their neighbor Elizabeth Howe. 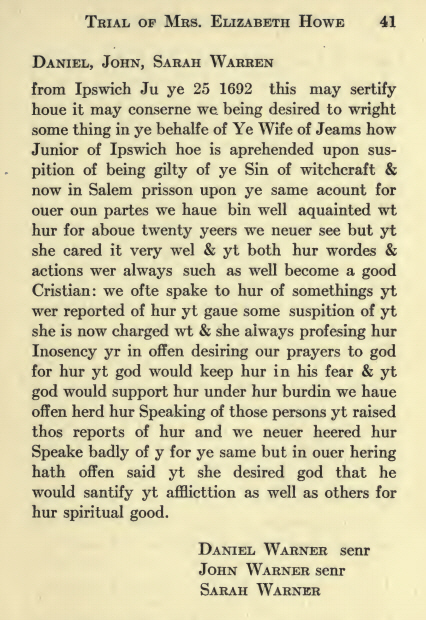 John, his brother Daniel and Daniel’s wife Sarah wrote this deposition in support of Sarah Howes.

This entry was posted in History, Storied, Witch Trials. Bookmark the permalink.