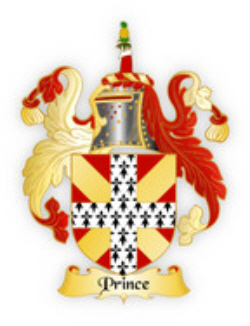 Thomas Prince was baptized about 1582, All Hallows Barking By The Tower, London, England or in Gloucestershire.  His parents were Thomas PRINCE and Elizabeth TOLDERBY. He married Mary PATCH on 7 Aug 1616 South Petherton, Somerset, England

All Hallows-by-the-Tower, also previously dedicated to St. Mary the Virgin and sometimes known as All Hallows Barking, is an ancient Anglican church on Byward Street in the City of London, overlooking the Tower of London. Founded in 675, it is the oldest church in London, and contains inside a 7th-century Saxon arch with recycled Roman tiles, the oldest surviving piece of church fabric in the city.   The heart of Richard I is said to be buried somewhere in the north part of All Hallows’ churchyard where a chapel once stood that had been built by Richard in the 12th century.

The church was badly damaged by an explosion in 1650 caused when some barrels of gunpowder being stored in the churchyard exploded; its west tower and some 50 nearby houses were destroyed, and there were many fatalities. The tower was rebuilt in 1658, the only example of work carried out on a church during the Commonwealth era of 1649-1660. It only narrowly survived the Great Fire of London in 1666 and owes its survival to Admiral William Penn, father of William Penn of Pennsylvania fame, who had his men from a nearby naval yard demolish the surrounding buildings to create firebreaks. During the Great Fire, Samuel Pepys climbed the church’s spire to watch the progress of the blaze and what he described as “the saddest sight of desolation”.

Thomas was baptized in All Hallows by the Tower Church, London

Mary was baptized in the Church of St Peter and St Paul in South Petherton. Note the octagonal tower

Children of Thomas and Mary:

This entry was posted in 13th Generation, Line - Miller. Bookmark the permalink.