James Gorham was born 18 Apr 1650 in Marshfield, Plymouth, Mass.  His parents were John GORHAM and Desire HOWLAND. He married Hannah HUCKINS in Barnstable on 24 Feb 1672/73.  James died  at Barnstable, MA, on 18 Nov 1707 and is interred at Lothrop Hill Cemetery, Barnstable, Barnstable, Massachusetts.

The gravestone is carved in the style of William Mumford of Boston. 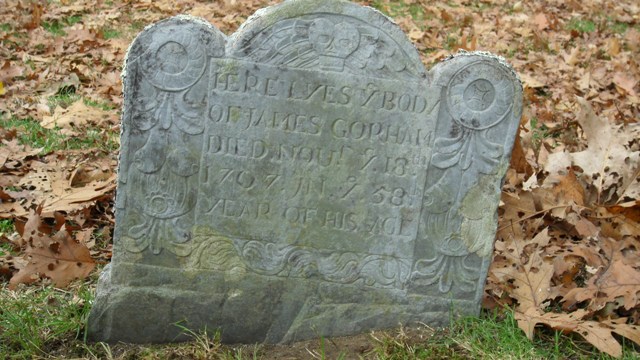 Children of James and Hannah

As eldest son, James received a large piece of his father’s land in Barnstable and built a large home there. At the time he was the wealthiest man in Barnstable.   James was a farmer all his life.

James Gorham, eldest son of Capt. John Gorham, was a farmer, and often employed in public business.  In the dividion of his father’s homestead, he had the north westerly and central portions, on which he build a large and elegant mansion house.  It stood on the spot where Mr. Warren Marston’s house now stands and was taken down about twenty years since.  It appears by the schedule of the dividion of the common lands made in 1703, that he was then the richest man in the town of Barnstable.  He married Hannah, daughter of Mr. Thomas Huckins, of Barnstable.  He died in 1707, aged 57, and his widow 13th Feb. 1727, aged 74 years.

Thomas was a blacksmith.

Children of Ebenezer and Temperance: