George Hardy Sr was born in 1633 in England.  His parents were John HARDY and Olive COUNCIL. He married Mary JACKSON in 1666 in Isle of Wight, Virginia.  He died in 1694 in Isle of Wight County, Virginia 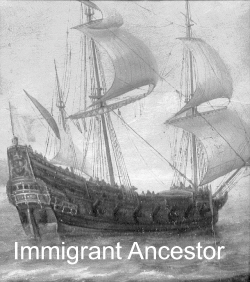 Mary Jackson was born in 1640 in the Isle of Wight County, Virginia. Her parents were Richard JACKSON and Mary BENNETT. Mary died in 1693.

Children of George and Mary:

The Hardy’s were 30th generation descendents of Emperor Charlemagne.

George Hardy was the owner of several large estates in Isle of Wight and Surry Counties, and had interest in several vessels.  He was a liberal supporter of the Established Church of England.  And came to the Colonies before 1654.

Captain George Hardy came from England before his parents about 1650. He was the owner of the Old Hardy Mill in Isle of Wight County, which is still standing. He owned large estates in both Isle of Wight and Surry Counties and had an interest in several vessels. He was a liberal supporter of the established Church.

Mary Jackson (Elizabeth, Alice Pierce) to whom, with her sisters Sarah, their grandmother deeded 150 acres of land in Isle of Wight county, 1647, married Captain George Hardy, who in 1648 had patented land across the creek from Alice Bennett.  George Hardy, who made a deposition 9 April 1670 stating that he was 37 years of age, named in his will, 5 March 1693/94 – 9 June 1696, Isle of Wight two sons, two daughters and grandchildren.

In the Name of God Amen, I  George Hardy being very sick and weak in body but…and memory Revoking all form and other wills forhere make my last will & testament in manor and form as follows.  First I give…my soul to God that gave it me; and my body to the earth from whence it was taken and for all my worldly goods as follows –

Impr.  I give and bequeath unto my son Rich. Hardy Sovon hundred acres of my Isle of Wight County and one hundred and fifty acres in Surrey belonging to ye Mill to him and his Heirs forever…

Item. I give and bequeath to my youngest son tho. Hardy Sovon Hundred and fifty acres of land in surrey County to him and his heirs forever…

Item.  I give and bequeath to my two grandchildren, Rich. & Geo Jarrott..

I give to my two daughters Marg. and Sarah each of them a gome of a hog of.. 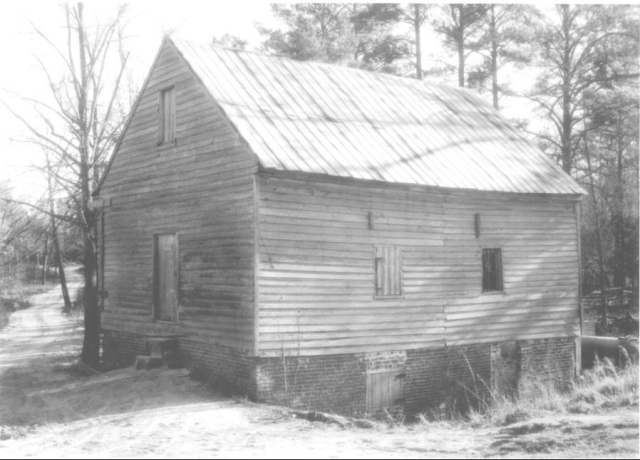 Hardy’s Mill in 1937  Historic marker at the intersection of Hwy 10 and Wrenn’s Mill
states that the mill “had been dismantled in the 1990’s”..

The mill was on  Wrenns Millpond (Google Map), Hardy, Isle of Wight, Virginia 23430. 20 miles south of Jamestown and a couple miles west of the James River 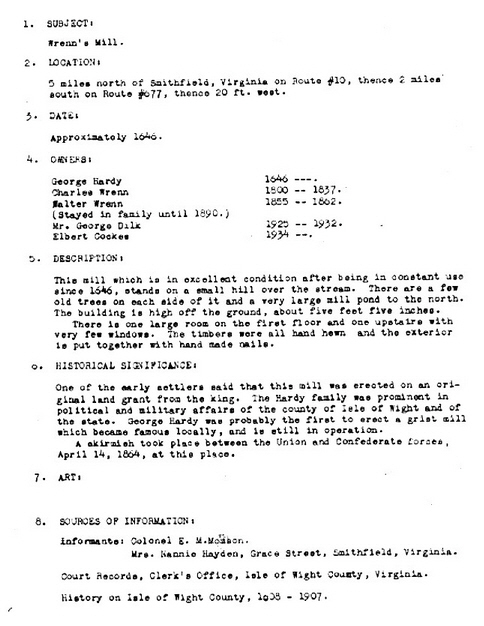 Thomas Hardy inherited the famous Hardy Mill. He had large estates in Isle of Wight and Surry Counties. He took a prominent and active interest in religious and public affairs.

Sarah’s husband Charles Pitts was born in 1667 in Isle Of Wight County, VA. His parents were Henry Pitt and Mary Galloway. He died in 1750 in Surry, Virginia.

Charles assumed the name Pitts instead of Pitt. In his Will he left his wife two cows, daughter Milea dishes and plates, daughter Lucy dishes, etc., and the remainder to his son Joseph and named Joseph as executor.

Richard’s wife Mary Chambers was born 1710 in Virginia. Her parents were William Chambers and Olive Ruffin. Mary died in 1756