Posted on September 4, 2016 by markeminer 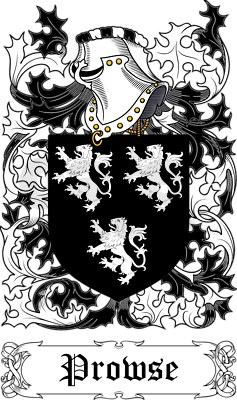 George Prowse was born after 1608 in Tiverton, Devonshire, England. His parents were George PROUSE and Thomazine GODDARD. George Prowse arrived in Jamestown on the ship Diana in about 1619. He married Alice KENN date and location unknown. George died afer 25 Sep 1684 in Kingston, Somerset, England.

Children of George and Alice:

The LDS records indicate that all of George and Alice Kenn Prowse’s children were born in England. Whether this is true or not I don’t know. All I know is what the LDS records indicate. If they are true, then George and Alice must have returned to England to raise their family. Son George, must have then come to the colonies in the early 1650s to be in St. Mary’s County and the above mentioned Will. There are other possibilities to explain the births in England andProwses in Maryland.

The Visitation of the County of Somerset in the Year 1623
By Sir Henry Saint-George, Sir Henry St. George, Samson Lennard, William Camden 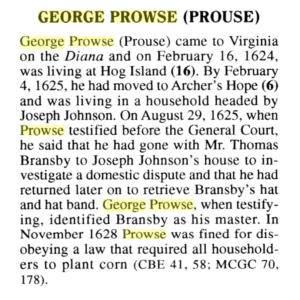 George Prowse/Prouse may be the George Prowse who was in St. Mary’s County, Maryland in the 1654 Will of Edward Cotten in which he receive a calf. In 1666 George Prowse was on a jury of inquest in a murder investigation when a bound servant was struck and killed by the person he was bound to.

George may have been the originator of the Maryland Prouse family. He and Mary had four children according to his Will. They were George, Elizabeth, Mary, and Phillip.

In The Name of God Amen.

I George Prouse doe here bequeath my Soule to Almighty God. And my boddy to be decently buried. Here now in perfect & Sound memory I doe order & give unto my Eldest Sone George Prouse 2 two thousand pounds of tobacco for Learning and to my youngest Sone Phillip 2 two more for Learning & two thousand for the girls that is one thousand pounds of Tobacco apiece towards learning, & I here make my wife whole Executor to see this ordered for the Chilldrens good to sell some of ye land for the Tobacco toward the Chilldrens learning & this is my last Will & Testament.

Then came the within named Jno. Davies, Mary Wade and Charles Mecarty & proved this last Will & Testament of George Prous decd, as witness my hand & Seal, John: Rawlings Dep. Commisary