Jabez Snow was born in 1642 in Plymouth, Massachusetts. His parents were Nicholas SNOW and Constance  HOPKINS. He married Elizabeth SMITH. in Sep/Oct 1670, about the time of the birth of his first child.  Jabez died 27 Dec 1690 Eastham, Barnstable, Mass. Burial: Cove Burying Ground, Eastham

Children of Samuel and Grace:

Jabez was fined 10 pounds by the Eastham church for having relations with his wife before the contract of marriage.  His first son Jabez was born about the time of his marriage.

Jabez served as Eastham surveyor of highways and as a selectman. He was a freeman June 7, 1681, at Eastham.

Jabez Snow was an officer in William Phip‘ s Expedition of 1690.  More than half of the 2,000 men who embarked to take Quebec from the French died of disease or accident.  The Battle of Quebec was fought in October 1690 between the colonies of New France and Massachusetts Bay.  On 23 and 24 October, an exchange of prisoners was negotiated and effected, and the ships set sail for Boston. Although Phips’ own account of the expedition admitted only 30 dead in combat, smallpox and marine accident claimed about 1,000 more.   Snow probably returned home by December and died 27 Dec 1690.  At the turn of the 18th Century, our ancestors took part in two unsuccessful naval expeditions to Canada. See my post Battle of Quebec 1690 & Quebec Expedition 1711

Battle of Quebec 1690 – The Batteries of Quebec bombard the New England fleet. 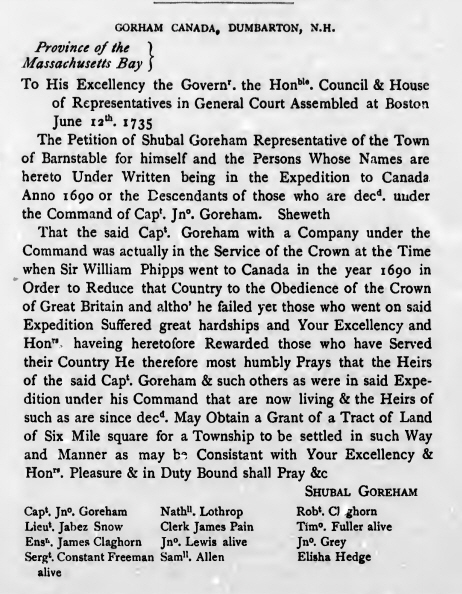 Shubael was a military officer and had sailed with Colonel John March in 1707 and then again as an ensign in Captain Caleb Williamson’s Barnstable Company with Nicholson when the English took Port Royal in 1710.

His greatest service, however, was his successful effort in obtaining the grants of Nargansett Townships to the heirs of the soldiers who fought in King Philip’s War. Col. Gorham spent much time and money promoting the settlement of Gorhamtown, now Dunbarton, Merrimack, New Hampshire. He bought the shares of many who did not desire to emigrate, but his speculations in the wild lands proved unfortunate. Buying such lands is like lottery tickets, a few get prizes. Col Gorham was not one of the lucky ones. He died insolvent in 1746, his own children being his principal creditors.

As you can see in the above petition, Shubael also advocated for veterans of the 1690 Canada Expedition including Jabez Snow.

Originally granted as Gorham’s-town in 1735, and re-granted as Starkstown in 1748, the town was incorporated in 1765 as Dunbarton. The name came from Dunbartonshire in Scotland, hometown to Archibald Stark, a prominent settler.

Jabez’ estate was inventoried 22 April 1691 by William Walker, Samuel Smith and Daniel Cole. There was no will, and the estate was probated 30 April 1691, with the inventory recorded by Joseph Lothrop 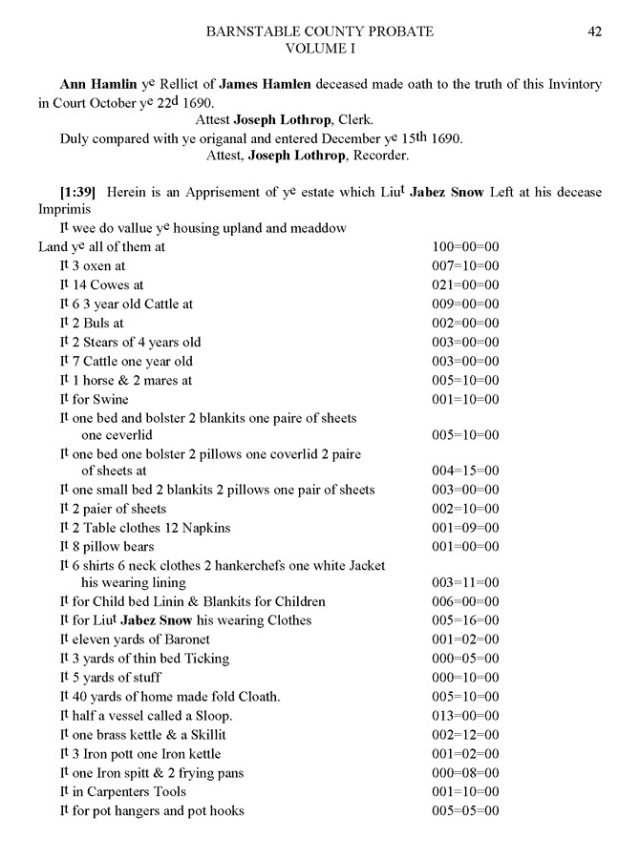 Elizabeth’s father Samuel was a 1699 graduate of Harvard 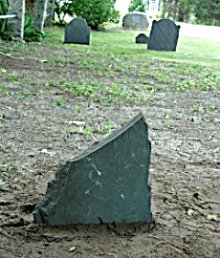 The inscription information is from a survey done about 1875 by Josiah Paine of Harwich. The inscription format is approximate. The gravestone was not found in the surveys of 1904 and 1976.

In August 2005 two slate pieces were uncovered next to the ninth granite post in the north fence as shown in the left photo. Note the bittersweet roots growing through the slate. In June 2006 the pieces were set in place one behind the other in the area where they were found. Dimensions above ground are 13″ W, 12″ H, 1″ D. The slate is located about 12′ northeast from the headstone of Hannah Snow (d1750) which is at Location 21 on the EHS survey map.

The Jabez Snow gravestone remnants were found in the same general area as the gravestone for Rev Samuel Treat. Elizabeth (Treat) Snow is buried in Bridge Road Cemetery probably because Cove Burying Ground was about full when she died in 1755.

Children of Jabez and Elizabeth

Jabez was a prominent man in Eastham and a deacon in the church.  He was selectman in 1743 and 1744 and town clerk in 1759 and 1760.  His will is dated Jul 31 1760, probrated Marr 17 1761′ Inventory May 9 1761 L254 0s. 4d.  Mentions wife Elizabeth and his six children.  Son Jabez IV was executor who applied to the General Court Jun 24 1761 and obtained permission to sell the property of the estate which was insolvent and to appropriate the proceeds after paying the widow’s thirds, towards paying his deceased father;s just debts.

Thomas Knowles died of “measles and fever”. He was an Eastham Town Clerk and church Deacon. In 1741 he sold 120th part of Narragansett Township No. 7 (now Gorham, Maine)

m3. 11 Nov 1761 in Eastham to Deborah Cooke (b. 22 Aug 1710 in Eastham – d. 10 Apr 1786 in Eastham) Deborah’s parents were Richard Cooke (1672 – 1754) and Hannah Smith (1678 – 1751) “Administration of the estate of Deborah Snow, late of Eastham, was granted to Nathaniel Cooke of Harwich on 10 April 1786. On 25 April 1786 appraisers were named to inventory real estate of Silvanus Snow, late of Eastham, that had been left to relict Deborah, her administrator suspecting that property had been embezzled by Mary Doane of Eastham, George Hatch and wife of Wellfleet, and Elisha Rich and wife of Wellfleet.”

Children of Edward and Sarah

There is an inconsistency between Rebecca Merrick’s reported death before 5 May 1723, implying probate on that date and Sarah’s and Jonathan’s reported 1712 marriage. *See discussion below)

Children of Sarah and Henry:

Intentions filed 6 Mar 1725 to marry Thankful Hawes of Chatham, but apparently he died before marrying.

Children of Sarah and Jonathan

Enos’ father gave him a farm outside the main settlement, toward South Orleans, Mass. It was the land he had bought from Patience (Paine) Norcott. It was later known as the James Percival place, and included Enos’ Point, later called Likey’s Point.

I can find no further information on Rebecca’s 1723 death or why a “before” qualifier was included, or Sarah and Jonathan’s marriage.

Some genealogies say that Jonathan and Sarah had a daughter Sarah Sparrow (b. ~ 1705 in Eastham. The posted birthdate of 1705 is possible but unlikely, and unreferenced. It’s more likely that Sarah was slightly younger than Enos, b. aft. 1712.

Therefore, my conclusion in that Sarah and Jonathan married shortly after Henry Young’s 26 Apr 1706 death and Rebecca Merrick died WELL before 5 May 1723.   If any knows more, please post a reply, thanks.

Deborah’s date of birth are not known. Estimates range between 1678 and 1690.

Children of Deborah and Stephen

Edward was the ancestor of the Kenricks or Kendricks of Barnstable County and Nova Scotia. Tradition holds that he came from the “West of England”, but it is unproven. Some believe he came to the Cape from New Hampshire. By 1704 he was in Harwich, and early in 1705 he was prospecting for land suitable for a farm in the part now South Orleans, between the head of Arey’s Pond (then Potonumocot Saltwater Pond) and the fresh Baker’s Pond (then Poponessett).

He chose 9 acres on the west side of the old line between Eastham and Harwich established in 1682. It adjoined the line and stretched up from John Yates’ land to Baker’s Pond. It was owned by the Indian landholder John Sipson, who lived at Potonumecot within the limits of the old town of Harwich. On 27 Jun it was conveyed to Mr. Kenwrick by Sipson “out of ye love” for “Mr Edward Kindwrick, weaver” and for “other valuable consierations”, with the “liberty” of grazing and cutting timber and firewood on the land “within ye township of Harwich”. It appears to have been his first land purchase.

He built his house on a small parcel of adjoinging land that he bought from John Paine. Edward seems to have been good friends with the Indians for reasons now unknown, and on many occasions purchased upland from them. Among the Indian grantors who sold to him were John Laurence, Jacob Jacob, Stephen Jacob, Amos Quason, Rebecca Quason, Lusty Tom, Amos Larrance, Samuel Quot, Joseph George, Thomas Boreman, and Matthia Quansit. Their deeds refer to Edward as a “dealer”, meaning shopkeeper, or trader.

From Peepen and Joshua Ralph, also Indians, he bought large tracts in Harwich between Muddy Cove River and Round Cove. He had meadow at the Great beach that he bought from Judah Hopkins, meadow in Gregory’s Neck at Matchapoxit, and meadow at Chequeset near Pleasant Bay. When he died he owned 20 acres in Truro that he had bought from Experience Turner.

He was clerk of the proprietors of the Great beach meadow in 1729 and for some years after. The Great beach was included in the Quasons’ deed to the purchasers in 1711. After 1725 he moved to a house he built on the west side of the public road now leading from Orleans to Harwich and Chatham, just southwest of what was the home of John Kenrick, Esq., at South Orleans. He built on a lot that belonged to “Mr. Tom”, the “Indian minister”, who had died and left the land to sons Lusty Tom, Abel Tom and John Tom. The sons sold the land to Edward.

At the time the property was inside the old town of Harwich. It was a large house, 2 stories in front and 1 in back, and he continued in business there as a “dealer”. He had slaves, to help in and out of his house. At his death he had 3 men and 3 women, valued at £98 in the inventory of his personal property. Some of them lived in cabins on his land. On the east side of the main road northeasterly, about 200 rods from Edward’s new house, on the westerly slope of a triangular piece of land that Eastham had set apart for an Indian meeting house, and north of the way leading to the Saltwater Pond, was the Indian burial place which until about 1830 had grave mounds made invisible by the plow. Edward may occasionally have attended worship services at the Indian meeting house, and may have given them financial aid.

Children of Elizabeth and Edward:

Their son John Kendrick (wiki)  (c. 1740–1794) was the first ship master who went on a voyage to the Northwest coast of the United States and discovered the Columbia River. Kendrick Bay on Prince of Wales Island near the southern tip of the Alaskan panhandle and Kendrick Islands, at the mouth of the bay are named for John Kendrick.

[This story is  a little much for a 2nd cousin, but it’s a rousing adventure tale  and he is our cousin two different ways, so I’m including the long version here: Solomon Kendrick]

Children of Rachel and Thomas

Children of Mercy and John:

This entry was posted in 11th Generation, Line - Shaw, Veteran and tagged Battle of Quebec 1690, Eastham. Bookmark the permalink.