Two first cousins named Thankful Hedge were born a couple years apart on Cape Cod.  Either one may have married our ancestor Edward STURGIS IV. Both show a death of 17 Apr 1762 in Yarmouth, Barnstable, Mass.

Another Thankful Hedge was born 23 Oct 1712 in Yarmouth, Mass. Her parents were Samuel’s brother  John HEDGE and Thankful LOTHROP.

Children of Samuel and Grace:

Samuel and Grace reused the names of two of their children, Thankful and Samuel.   I wouldn’t do that, but children’s passing was more accepted back then.  Alternatively, the younger boy was named Lemuel so they may have only reused “Thankful”

Mary died two days before her father at age twelve.

Genealogies sometimes record Samuel as Lamuel, looks like an “S” to me. 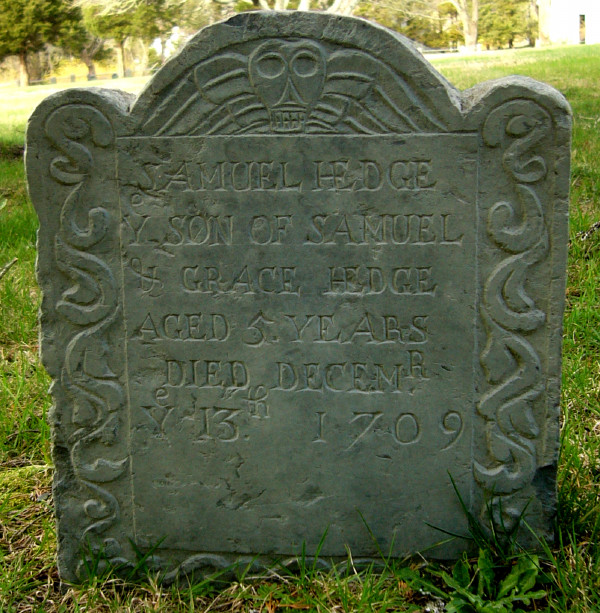 The town of Shrewsbury was first settled in 1722 and officially incorporated in 1727.
Townspeople created an agricultural economy with apple orchards and by 1750 there were two stores and four taverns as well as several small industries in operation. The rapid fall of prices for agricultural goods, the shortage of hard currency and the general economic depression following the Revolutionary War produced disastrous conditions for colonists. Shays’ Rebellion in 1786 sought to close the courts to prevent debt collections and the foreclosure of mortgages. Shrewsbury became a staging area for the rebellion and the encampment of the more than 400 insurgents, before the march on the Worcester Court House. Shrewsbury is now a suburb of both Boston and Worcester, about 45 minutes from Boston and 10 minutes to downtown Worcester.

Children of Elisha and Martha:

Warwick, Franklin, Mass. was first settled in 1739 and was officially incorporated in 1763.

The land that became Warwick was one of four tracts of land established by Massachusetts in 1735 to compensate the descendants of the officers and soldiers who served during the “expedition to Canada” and the Battle of Quebec in 1690. The area was initially called Gardner’s Canada and original proprietors were named in 1736. A 1737 owners list names the initial land owners, few of whom appear to have remained to settle the town once it was incorporated in 1763.

It took another 25 years to attract sufficient numbers of settlers to support a town and its minister. In 1760, such numbers were reached and the town hired a young Reverend Lemuel Hedge. The town was formed officially, as Warwick, on February 17, 1763. Its first officers were James Ball (town clerk), Moses Evans, Jeduthan Morse, James Ball (selectman and assessors), Amzi Doolittle (treasurer), Samuel Ball (constable), and James Ball (collector)

As the Revolutionary War approached, the town voted unanimously in favor of independence, although the town minister preached against it. Rev. Lemuel Hedge was barred from leaving the town in July 1775. He died 15 October 1777, the day British General Burgoyne surrendered his troops to the colonists in Saratoga. In 1776, Lieutenant Thomas Rich was selected to represent the town at the General Assembly of Massachusetts.

1759 – Lemuel graduates from Harvard University at the age of 25.

3 Dec 1760 – Hired to be the Minister of the Congregational Church, Warwick, Franklin, Mass.

Jul 1775 – As the Rev. War approached, Rev. Lemuel Hedge, an admitted Tory, preached against independence from England. For this he was disarmed & barred from leaving the town of Warwick.

Aug 1775 – Lemuel was arrested by a group of 40 Patriots. They intended to transport him to Northampton for imprisonment, but were eventually compelled to release him.

Nov 1775 – Shortly after his release from arrest, Rev. Hedge relocated to Hardwick, MA. He became quite ill from the stress brought on by the persecution for his Tory stance

15 Oct 1777 – Lemuel, an admitted Tory , was considered to have died as the result of persecution.

Joseph was a private in Capt. James Harlow’s Company, Col. Ezra Woods Regiment of Massachusetts Militia in the Revolutionary War. He served from June to November 1778. He was also in the 6th Massachusetts Regiment with Col. William Shepard, from July 8 to December 8, 1780

Originally called the Northwest District of Rutland, Barre was first settled in 1720. The town was incorporated on June 17, 1774, as Hutchinson after Thomas Hutchinson, colonial governor of Massachusetts. But on November 7, 1776, it was renamed Barre in honor of Isaac Barré, a champion of the American Colonies.

Children of Elizabeth and James