Children of  Edward and Thankful:

Temperance and Reuben had at least six children by the time he enlisted. Reuben was one of the four men paid an enlistment bounty by the West Precinct of Yarmouth on  Aug 6 1776. He became a private in Capt. Matthias Tobey’s company, Col. Aaron Willard’s regiment of Militia. He was paid a travel allowance to and from Ticonderoga in Jan 1777, taking part in the battle, and then being discharged at Ticonderoga. Reuben also served in Capt. Elisha Hedge’s company, Col. Nathaniel Freeman‘s 1st Barnstable County Regiment, on a three day alarm at Dartmouth Mass. in Sep 1778.

Children of Temperance and Ruben: 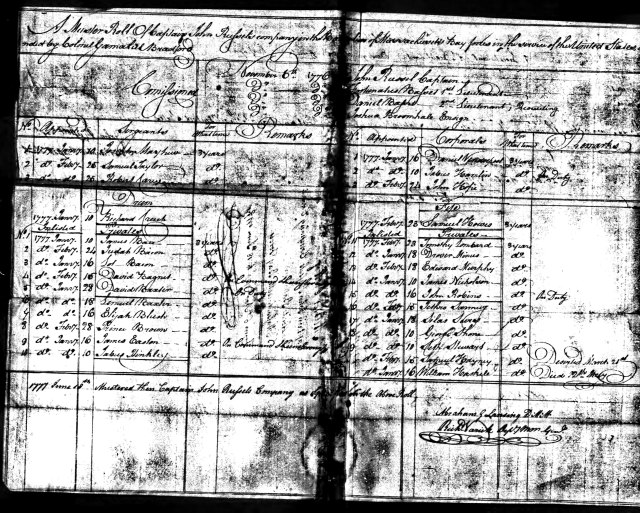 The 14th Massachusetts Regiment was raised on September 16, 1776 under Colonel Gamaliel Bradford at Boston, Mass. The regiment saw action at the Battle of Saratoga and the Battle of Monmouth.

There was another Elizabeth Sturgis born in 1734 in Barnstable, Barnstable, Mass whose parents were Nathaniel Strurgis and Abigail Cobb. I’m not sure which Elizabeth married Elisha.

Children of Elizabeth and Elisha:

In the 1840 census, Desire was living on a veteran’s pension in Vassalboro.

Peleg lived at East Barnstable, on S. W. corner, opposite Ezekiel Thacher’s house; he was a  mariner.

Inscriptions:
“In memory of Capt. Peleg Thacher he died August 12th 1817 in the 66th year of his age. They die in Jesus and are blest, How kind their slumbers are, From sufferings and from pain released And freed from every snare.”

Children of Abigail and Hezekiah:

In the 1850 census, Mark and Susanna were living in Ashfield, Franklin, Mass.

Rescom’s 2nd great grandfather was our immigrant ancestor Peter TALLMAN (1623 Hamburg, Germany – 1708 Portsmouth, RI).   He was Solicitor General of Rhode Island in 1662 and records indicate he was volatile, stubborn, prone to dispute and lawsuits and had the first divorce in family history.  (See his page for the juicy details)  The line is Gideon (b. 1725 Dartmouth, Mass), James (b. 1698 Portsmouth) , Dr. Jonathan (b. 1666 Portsmouth), Peter (b. 1623) 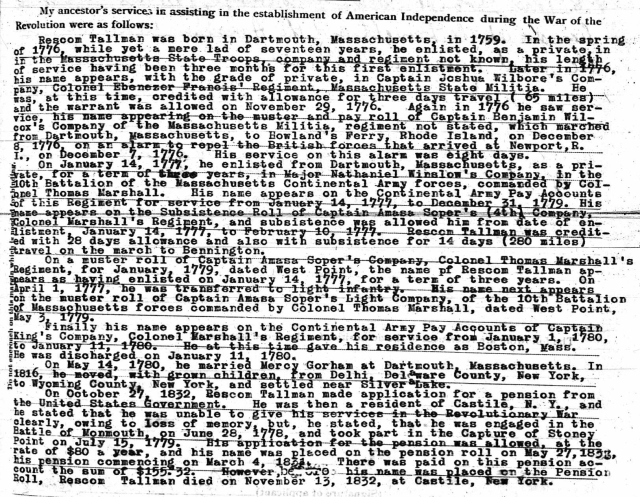 1804 – Rescom and Mary moved from Greenfield, Saratoga, NY to Delhi, Delaware, NY (Note that the name is pronounced with a long “i”, “Dell-high”) (105 miles southwest)

Silver Lake had a legendary sea serpent , According to an affidavit sworn by four men who were out fishing on July 13, 1855, it was a 60-foot-long  serpent with glowing, red eyes. The resulting frenzy that came from this story created an immense boom for the nearby town of Perry and Silver Lake. After this incident, about 100 other people claimed to see the giant beast. This phenomenon lasted throughout the summer and was last seen towards the end of the season. Despite the lack of appearance, it remained one of the most popular places in America.

One of the main beneficiaries of the sea serpent was A. B. Walker, the owner of the Walker Hotel in Silver Lake. When the Hotel burned down in 1857, firemen discovered the remains of the legend: a large mass of canvas. He had constructed the entire monster in order to attract business to the lake. It was said he got the idea from an Indian legend

In the 1850 census, Ebenezer and Desire were living with their son-in-law and daughter Joshua and Olive Hamblin in Yarmouth.

In the 1850 census, Phebe was living alone in Yarmouth.

In the 1860 census, Sally was living with her son-in-law and daughter Allen and Lois Nickerson in Yarmouth.

Alternatively, the Samuel Sturgis that married Lydia Crocker was born 27 May 1737 in Barnstable, Mass. (not 11 Dec 1742 Yarmouth, Mass.) and died Aug 1762 in Barnstable (not 17 Apr 1762) Note that Barnstable is both a town and county so they both could have been born in Yarmouth.  The other Samuel’s parents were Jonathan Sturgis (1711 – 1752) and Sarah Baker (1713 – 1737). He is listed as a Captain. Given that our Samuel was just 17 on 3 Apr 1760 when Lydia Crocker married and their daughter married in Barnstable town, this alternative is probably the most likely.

Child of Samuel and Lydia