Oliver Perkins Sr. was born 29 APR 1713 in Preston City, New London, CT. His parents were Ebenezer PERKINS and Hannah SAFFORD. He married Hannah GATES on 10 Jan 1733/34 in the  2nd Church in Preston (now Griswold, CT)  He was from Voluntown, CT when he was married.  Oliver died 26 Jan 1782 in Hoosick, Rensselaer, NY.

Children of Oliver and Hannah:

Moses Perkins owned various parcels of land in the Lanesborough and North
Adams townships of Berkshire Co Massachusetts in the 1770’s & 1780’s. He
also owned land near Pownal VT in 1780’s. Several of the deeds list his wife as Keziah/Kesiah Perkins. Moses was one of the son’s of Oliver Perkins, who also owned land in the same part of Berkshire County. Moses undoubtedly served in the Rev. War,
and likely fought at the Battle of Bennington (VT).

It appears from the Town Records of West Greenwich that Benjamin Tanner and his brother, James, were soldiers in the Revolution. Also that they belonged to the Third Company, and with others being unable to equip themselves in accordance with the Act of the General Assembly, provision was made for them accordingly.

Children of Hannah and Benjamin:

Mount Pleasant Township is on the eastern border of Wayne County.

Joseph moved from Preston, Connecticut and settled in what would become Wayne Co, PA in the spring of 1793 and had only one child. He built the first framed house in the area in 1795. In 1798 Wayne County was established from part of Northampton County. It is named after Anthony Wayne, a Major-General in the Revolutionary War. In 1806 the first store opened “Granger & Tanner” and in 1808 Joseph build the first house in the village (but it was burned down in 1811).

Joseph Tanner was the first Justice of the Peace after the organization of the town and county, since Mr. Stanton was commissioned in Northampton Co. Benjamin Dix was the first Constable.

Sabra, and Clarke’s brothers Joseph and Silas were administrators of his estate, filed Mar 26 1810.

It looks like Stephen and Betsey moved to Herkimer County, NY right after their marriage because that is where their first daughter Elizabeth was born.

Silas and Mary were pioneers in Geauga, Ohio (Racoon in the Onondaga or Seneca language) along with Mary’s parents James and Nancy.

The first settlement in Geauga was at Burton, Ohio in the year 1798, when three families settled there from Connecticut. Geauga County was founded on Mar 1 1806 as the second county in the Connecticut Western Reserve, originating from Trumbull County, Ohio. Geauga County is part of the Cleveland–Elyria–Mentor Metropolitan Statistical Area.

Ichabod removed to Petersburgh, Rensselaer, New York before the Revolution

Petersburgh is a town located in the northeast section of Rensselaer County.. The population was 1,525 at the 2010 census. The town was named after an early settler named Peter Simmons. The area was settled around the middle of the 18th century and was part of the Manor of Rensselaerswyck. The town was created in 1791 from the Town of Stephentown. The size of this town was diminished by the formation of other towns in the county, including the Towns of Berlin and Lansingburgh in 1806, and Grafton and Nassau in 1807.

Petersburgh was sparsely settled at the beginning of the War of the Revolution, and the number of men it sent to engage in that struggle therefore was not large. Among those who did serve in that war, however, were James Weaver, Lyman Maine, Ichabod Prosser, Gideon Clark, Sterry Hewitt and Arnold Worden.

In the 1790 census, Ichabod Prossar was living in Stephen Town, Albany, New York.

In the 1810 census, Jchabod Porser was living in Petersburg, Rensselaer, New York with a household of seven. 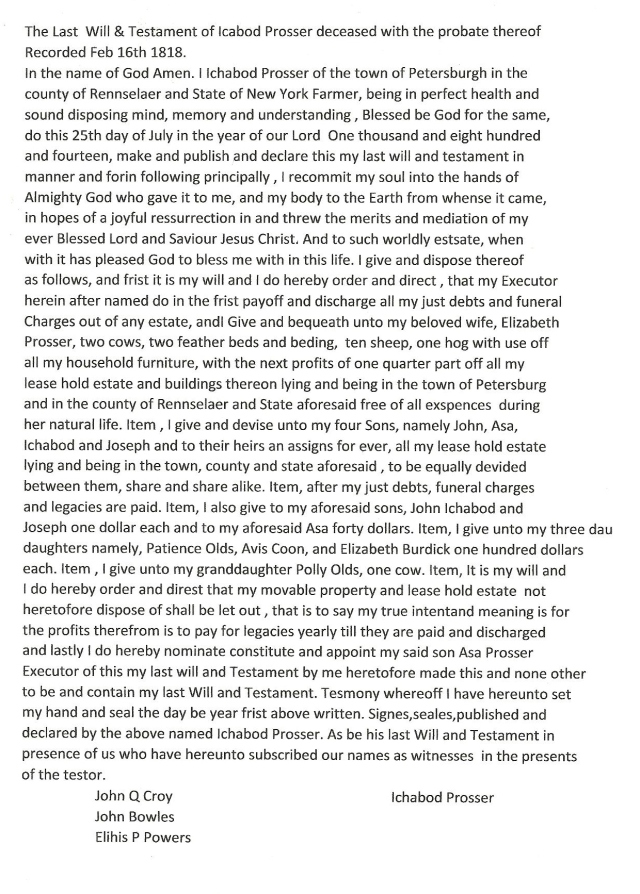 Children of Elizabeth and Ichabod:

About 1800 Dr. Job Tripp located at the village of Berlin, Rensselaer County, New York,, and soon after the practice of that locality was shared by Dr. Peter T. Olds. Dr. Burton Hammond, Dr. Emerson Hull and Dr. Henry Brown were in practice in the town a little later. The town is named after Berlin in Germany, although natives pronounce the name differently, with the accent on the first syllable.

In 1850, Avis Coon was farming in Georgetown, Madison, New York with 45 improved acres and 42 unimproved.

In the 1860 census, Elizabeth was living near Whitmore Lake, Northfield, Washtenaw, Michigan with her daughters Jane who was a dressmaker and Helen who was a school teacher.

Ephraim moved around 1800 to Highgate VT, where he died in 1820.(info from New England Historical & Genealogical Register 1901.)

Children of Prudence and Ephraim

In the 1860 census, Martha was living with her son Henry’s family in Dalton, Berkshire, Mass

In the 1850 census, Stephen and Mary were farming in Spafford, Onondaga, New York.

Rufus was a clothier in Chester, Vermont.

Children of Rufus and Susanna

Huldah’s father was an officer in the Revolutionary War

In the 1850 census, Moses and Hulda were farming in Rutland, Rutland, Vermont.

From the Rutland Herald, Jan. 7, 1858:
Died, in this town, Jan. 4, Capt. Moses Perkins, in the 72d year of his age.
When a respected and useful citizen is removed from the midst of us, the event demands more than a passing notice. The bereavement falls not upon the family circle alone, but extends to all who have, in various ways, been associated with him in the business aspects of life. The whole community feels the loss.

Capt. Perkins was born in the town of Rockingham, VT, April 10, 1786, and spent the years of his youth and early manhood on the East side of the Green Mountains. His father died when he was but eighteen years of age, and being the oldest child, the charge of his widowed mother and her nine younger children devolved chiefly upon his hands. This responsible trust he filially and honorably discharged; – thus in early life securing habits of industry, self reliance and enterprise which marked his whole subsequent course. Removing to this vicinity in early manhood, he soon became extensively known as an upright, energetic, business man, – a prompt, reliable Christian citizen.
For the last eighteen years he has resided in the village of East Rutland, encircled by the families of his children and children’s children, enjoying a large measure of the respect of this community. And as an evidence of the general confidence reposed in him he has been called to give a large portion of his time for many years to the settlement of the estates of deceased persons, and caring for the widow and the fatherless. This delicate trust he has, as is believed, wisely and faithfully fulfilled.

In his Christian counsels and prayers, – in his examples of uprightness and integrity, and in the grounds he has given them by his life and death, for believing that their loss is his gain, he has left to his bereaved family a precious legacy.

His protracted and painful sickness he bore with Christian fortitude, sustained by the consolations and hopes of that Gospel which he had openly professed thirty-five years before. Having at an early stage of his disease set his house in order, by the adjustment of his worldly affairs, he waited til his change should come. His last days were marked by a sweet and child-like submission to the Divine will. His end was peace. 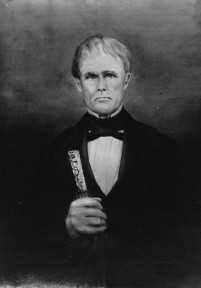 In the 1850 census, Abel and Jane were living in Frankfort, Will, Illinois.

In the 1820 census, an Oliver Perkins was living in Clarendon, Rutland, Vermont with a wife and a boy and girl under 10.

In the 1850 census, Amasa and Lucy were farming in Rutland, Rutland, Vermont with fivechildren at home ages 9 to 25, son-in-law Thomas Alchin and newborn grandson Charles Alchin.

In the 1850 census, Elvira (age 42) was still living with her parents John Lilie and Liba Goodwill in Tunbridge, Orange, Vermont.

In the 1880 census, Aaron and Elvira were retired in Stockbridge, Windsor, Vermont.

In the 1850 census, Henry and Betsey were farming in Shrewsbury, Rutland, Vermont with seven children at home ages 7 to 21.

In the 1860 census, Harry and Betsey were farming in Mendon, Rutland, Vermont. Their daughter Clarissa was a teacher.

In the 1870 census, Silas and Laura were farming in Mount Holly, Rutland, Vermont. 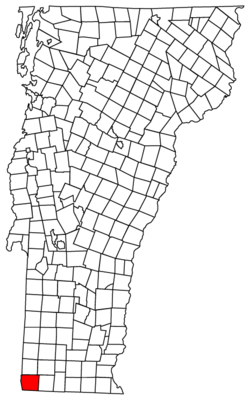 Pownal is in the extreme southwest corner of Vermont

The southwestern corner of Pownal was part of the Rensselaerswyck patroonship passed into English control in 1664. The first European settlers may have entered the area in the 1730s. Those first European settlers may have been Dutch or other Europeans who leased land within Rensselaerwyck. On January 28, 1760, New Hampshire Governor Benning Wentworth chartered Pownal, which he named after his fellow royal governor, Thomas Pownall of the Province of Massachusetts Bay.

Thereafter, settlers, primarily of English descent, began to arrive from Massachusetts, Connecticut and Rhode Island. In 1766, 185 male heads of households in Pownal sent a petition to George III, asking that their land claims be recognized and that the fees required to do so be waived. Since Wentworth had granted to settlers land that the Province of New York also claimed, legal and physical conflicts broke out between “Yorkers” and settlers in the New Hampshire Grants (or “The Grants”). As a result, a number of Pownal residents joined the Green Mountain Boys under Ethan Allen. By the American Revolution, the town was deeply divided between Patriots and Loyalists. The Battle of Bennington (Aug 27 1777) was fought about 15 miles away in Walloomsac, New York.

Children of Eunice and Richard:

In the 1850 census, Benjamin and Betsy were living alone in New Lisbon, Otsego, New York with only $200 of real estate.

In the 1850 census, Jonathan and Laura were farming in Pownal, Bennington, Vermont.

In the 1850 censusewd32e, Ethan and Mary were farming in Pownal, Bennington, Vermont.