Children of Robert and Joanna:

After his request for and admission to freemanship in the winter of 1630/31 (which tells us nothing about where he might have been residing in Massachusetts Bay at the time), Robert Abell disappeared from the records until 4 December 1638, when he appeared before the General Court [ MBCR 1:247], where his record immediately precedes two others relating to Weymouth. Where was Robert Abell during these seven-and-a-half years? Would an adult of substantial social status have resided in Weymouth for this entire period without creating a single record? Did he perhaps return to England for part of this time? Further evidence for this period of Robert Abell’s life would be welcome.
One record which may be relevant here comes from the records of the Providence Island Company. On 6 April 1638 “John Arrat, his wife and child, Robert Abell, John Clerke, Edmund Fole and Peter Talbot, sawyer, who were going to New England, say they are willing to go to Providence” [ Coldham 194]. If this is the Robert Abell of Weymouth it is consistent with his reappearance in New England records late in 1638, but it still leaves unexplained the gap from 1631 to 1638.

Robert sailed with the initial expedition in 1630 known as the Winthrop Fleet, which consisted of 11 ships carrying around 700 immigrants.   He was “related to the Cotton family and probably emigrated under influence of Rev. John Cotton [1585–1652] or Rev. Arthur Hildersham [1563-1632] of Ashby-de-la-Zouch, who lived a few miles from the home of Abell. Derby, the home of the Cotton family, was only five miles distant.

Robert was the second son of George Abell (1561–1630) and Frances Cotton (b. abt. 1573-d. by 1646).On his mother’s side, he was descended from a long line of English, Norman and French aristocrats and royalty.  His maternal grandfather, “Rt. Hon. Sir George Cotton,” was “Vice-Chamberlain of the Household to the Prince of Wales, (later King Edward VI) . . . a Privy Counsellor . . . [and] Esquire of the Body to King Henry VIII.” Henry knighted him before or in 1542.

Robert’s father, George Abell, at the age of 17 enrolled in Oxford University’s Brasenose College (8 Dec 1578). By Nov of 1580, he had become a barrister and a member of the Inner Temple. Before June 1630, he arranged an apprenticeship in London for his son, but Robert decided to try his luck in the New World, instead. This was a move that his father disapproved of, but, nevertheless, financed.

In his will, dated 8 Sep 1630, George Abell states (original spelling retained), “I bequeath unto my second sonne Robert Abell onelie a Twentie shilling peece for his childs parte in regard of ye charges I have beene at in placeing him in a good trade in London wch hee hath made noe use of and since in furnishing him for newe England where I hope he now is.”

Robert Abell’s first recorded act in America (19 October 1630) was to apply to be a freeman in the recently founded village of Weymouth. On 18 May 1631, he took the freeman’s oath. “This act endowed him with full privileges and responsibilities of citizenship in the new colony, including ownership of lands, in the exercise of which he continued to acquire holdings.”

During his time as a resident of Weymouth (1630–1643), his civic duties included serving on various types of juries (grand, petit and coroner’s), and records indicate that he accumulated a small amount of land (about 7 acres).  Like many immigrants, Robert Abell did not stay indefinitely in the first place he landed. In 1643, when the opportunity to join a newly founded town presented itself, he followed Reverend Samuel Newman (and the majority of his congregation) to a place the local Wampanoag tribe called Seekonk (a portion of which was later renamed “Rehoboth”).  Some of Abell’s activities while living there can be found in the following extracts from the minutes of various Rehoboth town meetings and Plymouth colonial records:

[TGMB 1:3-6] Robert Abell came from London in 1630 and resided first at Weymouth and then moved to Rehoboth in 1643. In 3 July 1656 Robert Abell was allowed by the court to keep an ordinary in Rehoboth. Admitted as a freeman 18 May 1631 and was on the list of those in Rehoboth who took the oath of fidelity in 1657. Son of GA and FC. Probably married by 1639. Joanna married 2) William Hyde of New Norwich at Rehoboth 4 June 1667 where she removed to Norwich and outlived him.

In His Will of 8 September 1630, George Abell of Hemington, Leicestershire, Made A Small Bequest To His Second Son Robert Abell “in Regard of The Charges I Have Been At in Placing Him in A Good Trade in London Which He Hath Made No Use of and Since in Furnishing Him For New England Where I Hope He Now Is” [Abell Gen 42, Citing 10 St. John]

Made a freeman in Weymouth 19 October 1630; oath taken 18 May 1631. He is mentioned at the Quarterly Court, Boston, 4 December 1638 and 2 June 1640 at Weymouth. In 1643, he removed from Weymouth, probably following Rev Samuel Newman, the founder of Rehoboth (called by the Indians, Seekonk). Bought Job Lanes part of the settlement. In 1651, it was agreed that Robert Abell and Richard Bullock should burn the commons…. 28 March 1653, RA got 3 acres of meadow on the north side of the line, next the town; 1 February, he was ordered to keep and ordinary; and in Plymouth 3 July 1656, he was allowed to keep an ordinary at Rehoboth. Took oath of fidelity in 1657. RA’s widow married William Hyde (Hide) of Norwich, 4 June 1667, at Rehoboth.

All of the Abell brothers had sizable families (seven to ten children each), helping to perpetuate the family name in New England. Writing in 1940, genealogist Horace Abell claimed that “probably all the present day Abells of New England stock are descended from Robert’s three sons, Preserved, Caleb and Benjamin Abell. His fourth son, Joshua, did not leave any male descendants.”

Mary’s husband Reverend Samuel Luther was born in 1636 in Boston.  He was the son of an adventurous mariner named Captain John Luther (d.1645), “a focal figure in the colonies mentioned several times in Winthrop’s Journal and other colonial accounts.”Robert Abell’s new son-in-law was already famous in New England for having survived a massacre and kidnapping by a small group of Lenape tribesmen when he was only nine years old (1645) and went on to become (1685) the highly respected “settled pastor” of the First Baptist Church (still extant) of Swansea, Massachusetts for 31 years.  Samuel died in 1716 in Rhode Island.

Children of Mary and Samuel

xi. Joanna Luther b. ABT. 1685 Swansea, Mass.; d. 21 MAY 1706; m. 27 May 1704 to Nathaniel Wilmarth; His parents were John Wilmarth and Ruth Kendrick and his grandparents were Sgt. Thomas WILMARTH and Elizabeth BLISS.  Joanna died after the birth of their first child, Nathaniel then married He married Mary Perry 5 SEP 1706 in Scituate, Plymouth, MA, 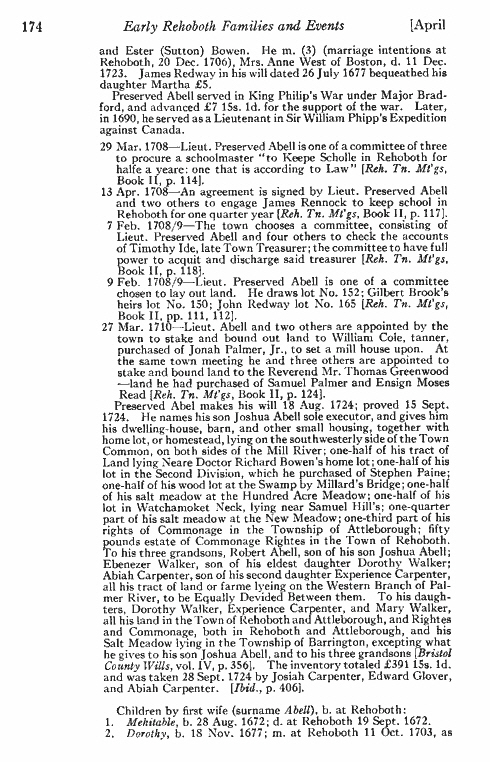 Children of Preserved and Martha

Children of Preserved and Sarah

Caleb’s first wife Mary Miller was born 1662 Groton, CT. She had previously married : ABT. 1680 to John Loomer and had five children by him. Mary died AUG 1731 New London, CT.

Sgt. Caleb Abell is first mentioned in the Colonial records at Dedham in 1665, petitioned for Freeman in Dedham, May 3, 1665; in 1668 moved to Norwich, Conn. In the original purchase of land when Norwich was settled, six acres having 16 rods front was assigned to Robert Wade, this he sold to Caleb Abell in 1677 and it was afterwards known as the Abell homestead. This property abutted on Town Street 16 rods, on the home lot of Morgan Bowers 72 rods, on the river 18 rods and on John Birchard land 74 rods. The location may be seen in a map on page 67 of “Caulkins’ Norwich.” On December 18, 1694 Caleb was appointed to keep his house as “an ordinari or of entertayment” for the year, or until another be chosen.

In 1697 Caleb and ten others were allowed to build a seat on the east side of the meeting house on the Leanto beams for their convenient sitting on the Lord’s Days. Rev. Huntington’s book of “Old Houses of the Ancient Town of Norwich” names 36 men whom he supposes to have been original proprietors; but one of these was Richard Wallis and another was Caleb Abell, who in 1660 was only 14 years of age. On May 2, 1728 Caleb deeded 12 1/4 acres of land to his daughter, Esperience Hide. On January 12, 1727/28 Caleb deeded to his son Noah his home lot, dwelling house and barn, all lands adjoining his home lot and lands over the river (Yantic) his pasture land lying northerly and northeasterly of William Hide dwelling house (which house was on the other side of Town Street and a little to the east) lying in two parcels, together with land on both sides of Bradford brook on north side of road leading to Lebanon, except 1 1/2 acres on south east of brook and land near Benjamin Abell’s dwelling house which he gave to his son Samuel, reserving to himself and his wife Marey the dwelling house during his life and for hers after his decease, also liberty to his daughter Hannah to dwell in said house so long as she remains unmarried and a passageway across home lot to his son Samuel to Samuel’s own land.

Child of Caleb and Mary

Children of Caleb and Margaret

ABIGAIL SLUMAN: Grave inscription: “Here lies the body of Abigail Abel, wife of Mr. Caleb Abel, a prudent and virtuous woman, who after short illness departed this life in hope of life eternal, Nov. 11, 1748 in the 70th year of her age.”

Joshua was constable in Dedham, Massachusetts and frequently chosen townsman there. He moved to Norwich, Connecticut in 1667 and became a ‘considerable landowner,’ with 44 grants listed in his name.”

Children of Benjamin and Hannah

Mehitable Abell’s husband William Brewster was born 11 Aug 1695 in Norwich, New London Conn. After William married Hannah  in 1716 they moved to “the Oblong”   The Oblong was a strip of land 2 and 1/2 half miles along the Connecticut Border which had been ceded by the State of Connecticut to New York in 1731 in exchange for lands along Long Island Sound.

Williiam and his brother Ebenezer both deserted their wifes.  Ebenezer’s wifes name was Elizabeth.  After their divorces, Ebenezer and William went to Virginia. Mehitable filed for divorce 10 years after William deserted her.

Petition for Divorce-“To the Honorable Superior Court, Now setting at Windham Within and for the County on the 3rd Tuesday of March 1749.  The Petition of Mehitable Bruster of Windham in Said Coynty With Whome Your Petitioner Lived in the Due Discharge of all the Duties of a Wife to him of Said William til Sum time In the Month of March In the Year 1733, at which time he the Petitioner Ever since the Year 1733 Whereupon Your Petitioner Given Willfully Deserted and Left Your Petitioner With the Total Neglect of all Duties of a Husband Toward Your Petitioner be Single and unMarried is by Law You are Inabled to Do and Your Petitioner as is Duty bound Shall Ever pray.  Dated in Windham March 20th 1749.

Benjamin also held substantial property adjacent to or near his older brothers in Norwich.

Experience’s husband Deacon John Baldwin was born 5 Dec 1654 in Guilford, CT. John died 5 Jan 1704/05 in Lebanon, CT. He was an early settler of Lebanon, Connecticut, settling there with his father in 1660, was one of the nine original members embodied in Church State, November 27, 1700, at Lebanon. He was chosen with Josiah Dewey one of the Deacons; was a Selectman in 1717.

Children of Experience and John: