Rev Nehemiah Smith was born in 1605 in New Castle, Stafford, England.   He married Sarah Ann BOURNE on 21 Jan 1639/40 in Marchfield, Mass.  Nehemiah died in 1686 in Norwich, CT. Both Nehemiah and Sarah Ann were both buried in the Post and Gager burying-ground, in Norwich, in the oldest part of the cemetery. 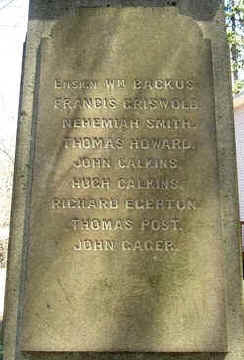 Children of Nehemiah and Sarah Ann:

Nehmiah Smith came to America and  made application to be a freeman on 6 Mar 1637/38 in Plymouth MA. He lived for a time in Marshfield or Greens Harbor as it was then called and is believed to have been the first religious teacher there. Though spoken of as a minister, he does not appear to have been ordained. He is more often spoken of as Goodman, Sheperd or Weaver Smith.

3 Mar 1639/40 – The court ordered that land between Marshfield and Duxborough be set aside for the use of the ministers of the two places, in order to settle the dispute of the towns as to which owned the property, and Nehemiah Smith was named as the Marshfield minister.

5 May 1640 – “John Winslow, Nicholas SNOWE, Nehemiah  SMYTH, Georg Soule, Josuah Pratt, are appoynted to view all the meddowes at Greens Harbour, wch are not graunted forth, & to measure them, and to make report thereof the next Court.”

From Marshfield, he sailed to Stratford, CT, taking with him a flock of sheep. He pastured them on Long Island, then controlled by New Haven. CT.

Nehemiah Smith was a Religious Teacher, Shepherd and Weaver

1 Jun 1641 – The court ordered that he sell his sheep to anyone who desired to buy them, as he intended to leave town to move to Connecticut, and it was against the law to carry sheep out of the colonies; a certain price was set on them, and he was permitted to take those which were not sold.

1644 – He was living in Stratford, Connecticut and the baptisms of some of his children are found there, but as the early records of that town were destroyed by fire, not much about him has been found there.

He moved to New Haven, possibly about 1645, although it was more likely later. He was called “Shepherd” because of his keeping sheep. He kept his flock on the west side of the Oyster river, on a hill later called Shepherd’s Hill, where he built a sheep pen as early as 1645.

1644 – He was granted land in New Haven. Connecticut, for the keeping of his sheep, and in 1645 the grant was confirmed, on June 16, but on December 8, 1645, it was revoked by the court, as Smith refused to promise to keep other sheep than his own on the land. On August 16, 1646, land was again granted him on Shepherd’s Hill. On July 5, 1647, the court decided to allow him to keep his sheep on the neck, as it had been learned that he was talking of moving away, and they desired “that the sheepe with himselfe might bee kept in this towne, for thereby much good may redound to the publicque.” It was also ordered that those who owned land on the neck should clear it for that purpose.

11 July 1649 He was granted twenty acres of upland on Shepherd’s Hill and ten acres in Oyster Meadow, as he desired to live in New Haven, though he stated in his petition for land that “because of some weakness he finds upon himselfe” that he could not keep the town’s sheep any longer.

1651 – It was ordered that the land granted to him for keeping sheep be returned to the town.

Oct 1679 – Nehemiah Smith, aged about seventy-four, and Ann, his wife, testified in an attempt to break his brother’s will that “about seven and twenty years ago they lived on Long Island.” This would be about 1652, and as he was in New Haven after May 13, 1650, he doubtless moved in the spring of 1651, very likely settling in Southold.

29  Aug 1652 – He was living in New London, Connecticut, and was granted eight acres of upland. In the town records of New London he is called a weaver, and various parcels of land were given him there. He lived in that town probably until after 1655, but owing to trouble with the Indians he moved to Smith Lake, Poquonock.

Jun 1659 – He was one of the original proprietors of Norwich, Connecticut, which was bought in June, 1659, of the Indian Chief Uncas and his sons. His home lot was laid out in November, 1659. He had the largest tract of any of the first settlers, and received other grants at later times. His house was about fifty-seven feet north of the oldest burying ground, known as the Post and Gager burying ground.

1666 – He and his brother John were freed from training because of their age.

1684 – He and wife Ann deeded their homestead and other property to their son-in-law, Joshua Abell, on condition that he take care of them in their old age. He died about 1686, aged about eighty-one years, and was buried in the Post and Gager burying ground. Nehemiah Smith, his son, was administrator of his will, which was proved September 22, 1686.

From Genealogical & Family History of the State of Conn:

Rev. Nehemiah Smith, immigrant, was born in England about 1605 and settled at Plymouth in New England before March 6, 1637-38, when he and others applied to be made freemen of the colony. He married, January 21, 1639-40, Anne Bourne, of Marshfield, daughter of Thomas and Elizabeth Bourne.  Her sister Martha married John Bradford, son of Governor William Bradford. Nehemiah Smith lived for a time at Marshfield and is believed to have been the first religious teacher there. He was appointed May 5, 1640,on a committee of five to view all the meadows of Green Harbor (Marshfield) which were not granted and report their measurements to the general court.

From Marshfield Smith sailed to Stratford, Connecticut, as early as 1644. He belonged to the church and some of his children were baptized there. The records show that he raised sheep extensively and was called “Shepherd” Smith. He owned land in the New Haven jurisdiction. He removed to Long Island about 1652,but returned in a year or two, and located at New London, Connecticut, where he was granted land in 1652.  He appears to have been a weaver by trade and doubtless spun the wool from his own sheep and made it into cloth.   About 1655 he settled on a farm at Smith Lake, Poquonock. Smith was one of the original proprietors of Norwich, Connecticut, and had the largest tract of land.   His house stood about fifty-seven feet north of the oldest burying ground. He had grants in 1661 and afterward. He conveyed some land to his nephew, Edward Smith, November 18, 1668, and he and wife Ann conveyed their homestead to their son-in-law, June 12, 1684, in consideration of maintenance for the remainder of their lives.   He died about 1686.  He left a will, but the records including the will have been destroyed. The records sometimes refer to him as “Mr.” in recognition of the fact that in early life he was a preacher. Children: 1. Sarah,baptized in the First Church, New Haven, December 14, 1645, when about three years old. 2. Mary, baptized December 14, 1645, at New Haven.3. Hannah, baptized with Sarah and Mary.4. Mercy, baptized February 22, 1645-46.5. Elizabeth.6. Nehemiah, mentioned below. 7. Lydia, born 1647. 8. Ann (perhaps same as Sarah, for the mother was called Sarah in the church records). 9. Mehitable

[Abell1 52] Of New London, Stratford, New Haven and Norwich.[NHTR 1:23] 20 acres granted to to be laid out on Shepherds Hill, but by an error it was laid out in another place. (May 1650)[NHTR 1:80] (Aug 1651) NS ordered to “meddle no more to breakup or any way improve the land formerly granted for sheep on the west side, the grant being void and the land returned to the towns use and dispose”[TAG 8:1664] NS of Plymouth Mass 1638 and of New Haven 1644. Had at New Haven Elizabeth, baptized 22 February 1645, and Nehemiah, baptized 24 October 1646. Later removed to New London and Norwich. Married AB, daughter of Thomas Bourne.[Norwich1 19] NS of Stratford 1646, removed to New Haven, and obtained a grant of land upon Oyster River for keeping sheep. Occasionally, he is referred to as “shepherd” Smith. He was in New London in 1652 where his brother John had previously settled. From thence he came to Norwich in 1660 or soon afterwards. In 1663, he was styled `now of New Norridge’. Appears to have had 6-7 daughters and only one son. His wife Sarah at New Haven was a member of the church; at Norwich in his old age, had a wife Ann. In 1666 he declared himself 60 years old and died in 1686.

Joshua went to New London, Ct., 1658, where he purchased land. 1662, a small grant of the water front,south of the “Fort land,” was made him. In 1668, by the payment  of £15 to Uncas, a settlement of the town bounds was effected. The payment of this gratuity was assumed by James Avery, Daniel Wetherell, and Joshua Raymond, who were indemnified by the town with 200 acres of land each. He was perhaps the second person who built on the Indian lands. He was one of the Committee who laid out the road between Norwich and New London through the Indian Reservation, and for this service he received a farm on the route, which became the nucleus of 1,000 acres lying together about eight miles from New London, which was owned by his descendants. In 1672 he was Cornet of Capt. Palmer’s Co. of Troopers. In 1675 his land, now the corner of Parade and Bank Streets, was fortified against the Indians, the town raising 70 men, beside Pequot and Mohegan Indians, of these troops he was Commissary.

10 Oct 1678 –  The General Assembly empowered the widow to “pass over” to Oliver Manwaring a house and land which her husband had bought for him, and for which he had received payment, though he had not completed the transaction at the time of his death. Manwaring was his brother-in-law.

Children of Elizabeth and Joshua

Children of Elizabeth and George

Children of Sarah and John:

Hannah’s parents may have been George Smith and Sarah [__?__].

Children of Hannah and Stephen:

Children of Nehemiah and Lydia: