Augustine Williams may have been born about 1650 or 1653 in Stonington CT or as according to LDS, he was born in 1644 in Martha’s Vineyard, Massachusetts.  But in reality, his origins remain a mystery and very little is known about him.  He married the Hannah NORTON about 1678 in Stonington, CT.  Augustine died before Jun 1692 in Killingworth, CT.

Hannah Norton was born about 1657 in Edgartown, Dukes, [Martha’s Vineyard], Mass. Her parents were Nicholas NORTON and Elizabeth ISAAC. After Augustine died, she married John Brown and had one child, Samuel Brown.  Samuel Brown was born about 1700 and died in 1745 in Waterbury CT.   Hannah died on 18 Jan 1710 in Lebanon, New London, CT.

Children of Augustine and Hannah:

*Dukes Deeds, I, 322, 331. The Diary of Thomas MINER  of Stonington speaks. of delivering corn to Augustine Williams in 1680 (p. 16o), indicating residence in Connecticut at that date 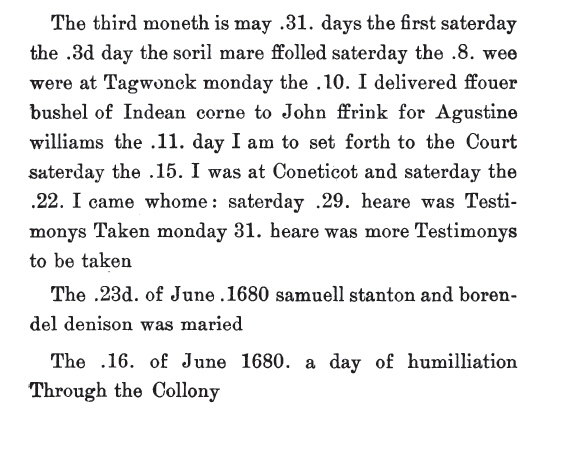 In describing an early boundary conflict between the towns of  Killingworth and neigboring Saybrook which was settled by Killingworth voting on  16 Mar 1687 to pay Saybrook for clear title. “it appears from page 138, vol I, that  the following persons ‘Did Disburse money for Saybrook purchase …’Augustine Williams 0…5’ ” (Pounds, shillings, pence)

His marriage to Hannah Norton in 1678-80, prob. in Martha’s Vineyard
(Augustine is noted as being of Stonington, New London, CT) is found in The
History of Martha’s Vineyard by Dr. Charles Banks, Vol. 3 Family Genealogies, pp
341-382 “The Norton Family of Martha’s Vineyard” and New England Marriages
Prior to 1700 by Clarence Almon Torrey, 1987 Baltimore, Genealogical Publishing
Co., Inc.

Augustine Williams was a transient resident of Martha’s Vineyard. He is first found here in 1679, as a witness, and again in 1684 and 1687 in the same connection.  The town records have an entry relating to him in 1681, and it may be inferred that he was a constant resident here between the earlier and later dates. Of his antecedents nothing is definitely known, but he was probably a resident of Stonington, Conn., (1663), and possibly a mariner. He married Hannah Norton, and had Thomas [1678], Hannah, 1680, Daniel, 1683, Bethiah, 1686, and Matthew, 1688, all recorded at Killingworth, Conn., whither he removed about the last named date. He died shortly after this, as in 1692 his widow Hannah was empowered by the General Court to sell certain property, according to a verbal bargain made by her deceased husband.   She was here on Aug. 17, 1692, as witness to a deed, probably on a visit.  She married a second time, before 1699, elder John Brown of Killingworth.’^

^Dukes County Court Records, Vol. I; comp.. Deeds, I, 398. Thomas Harlock was appointed one of the administrators of his estate.

‘Killingworth Town Records. Thomas Williams, natural son and heir to Augustine Williams, deceased, deeds to his natural mother, Hannah Brown, administratrix of estate of his father, March 12, 1699. Elder Brown died in 1708, but whether she survived is not known to the author.

Children of Thomas and Experience:

See this discussion for confusion over the Hannah Williams that married John Pratt. http://www.geni.com/discussions/90019?msg=674496

Children of Hannah and John:

Child of Daniel and Lydia: