Children of Josiah and Mary:

Josiah Heath took oath of allegiance in 1677 at Norfolk, MA

Mary was admitted to the Haverhill church April, 1723.

Children of Mary and Aaron recorded at Haverhill:

Josiah’s wife Hannah Bradley was Mary and Joseph’s sister. She was born 28 May 1677 in Haverhill, Mass. Her parents were Daniel BROADLEY and Mary WILLIAMS.  Hannah was killed by Indians 1721.

Josiah & his brother John were members of a large company of soldiers, under the command of Lieutenant-Colonel Saltonstall, were also kept constantly armed and equipped, and exercised in the town; and, that these soldiers might be the better prepared for every emergency, the General Court (June 19 1710) ordered them to be supplied with snow shoes. Snow shoes were also supplied to the whole of the North Regiment of Essex.Daniel BRADLEY’s son Joseph, Joseph HUTCHINS’ son John, Anthony COLBY II, and Stephen DOW’s son Samuel were also members. 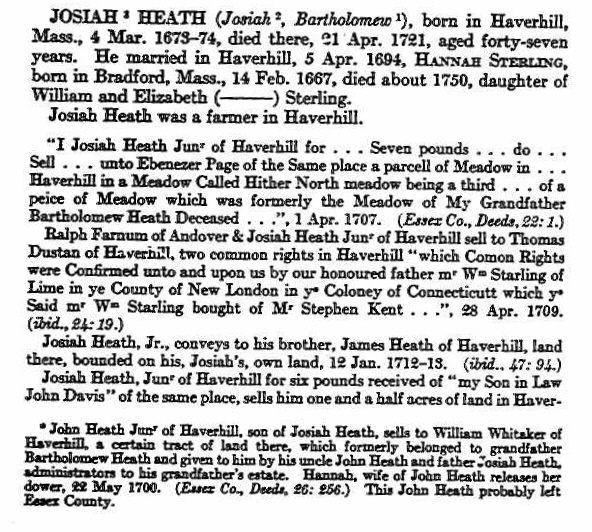 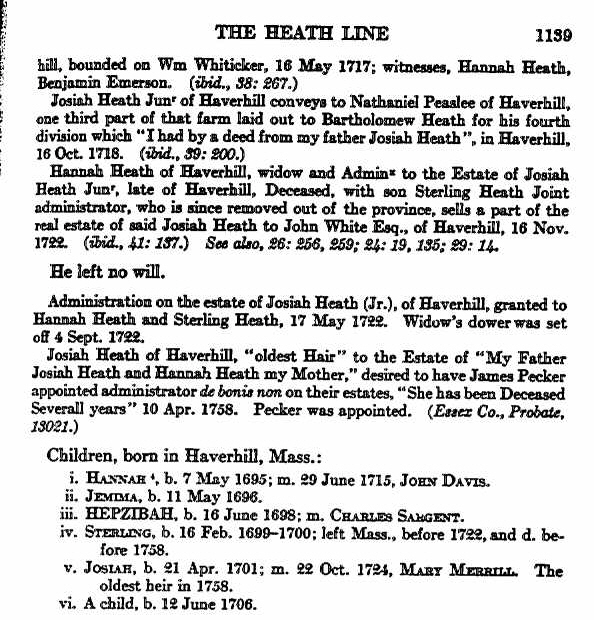 Thank you for a heads up from D. Fory  There has been a confusion perpetuated by papers from researcher, Valerie Dyer Giorgio. She has mixed up 2 cousins. The John born 29 March 1676 to Josiah Heath and Mary Davis did marry Hannah Haynes or Haines 16 December 1697. He did not have Rachel Heath b. 20 April 1720. Rachel’s father John Heath was born 14 Mar 1674/75 to John Heath Sr. (b. 15 Aug 1643) who married Sarah Partridge and is the correct line. {This data is backed up by the book: Northern New York Genealogical and family history by William Richard Cutter published 1910. This book is owned by Pam Reitsch and is part of the Mardos Memorial Library}. This John did marry Frances Hutchins or Hutchens 12 Jan 1696/97 and had 10 children, Rachel being their last born 20 April 1720 and marrying Moses Jackman.   One wife belongs with Josiah’s son,John, (Haines) and one wife belongs with John Sr.’s son, John, Frances Hutchins b. 7 June 1676 in Haverhill and died 1713 in Haverhill. Divorce wasn’t accepted back then. The marriage dates were suspicious as well being within a year of each other or a month of each other depending upon which date you accepted for Hutchins 96 or 97.

Probably the Jonathan Simonds found on the list (June 19, 1710) being supplied snow shoes by the General Court, as a soldier under the command of Lieutenant Colonel Saltonstall (French & Indian Wars). On list of taxpayers of Haverhill MA 10 December 1741 as “Jonathan Simons.” 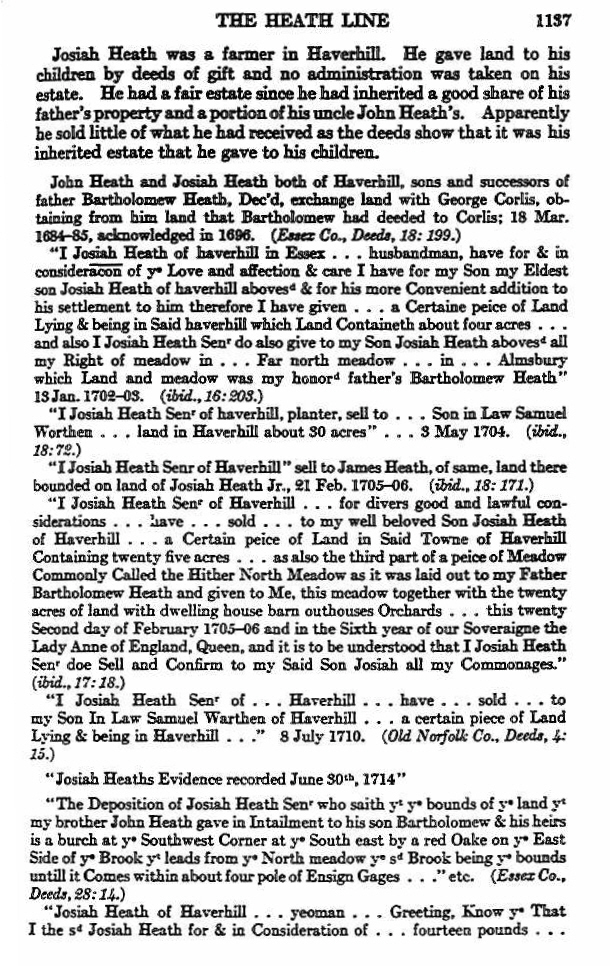 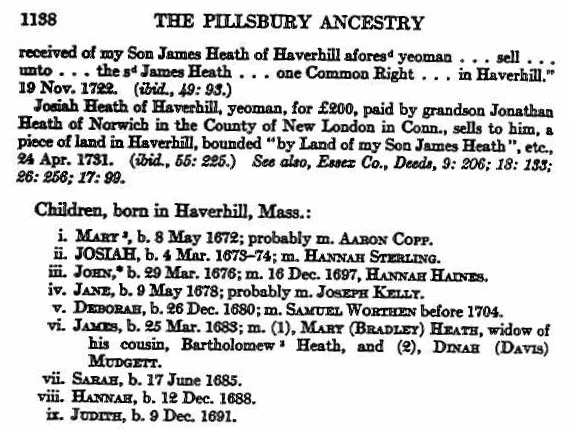 The history of Haverhill, Massachusetts: from its first settlement, in 1640 … By George Wingate Chase

Genealogical and family history of the state of New Hampshire: a record of the achievements of her people in the making of a commonwealth and the founding of a nation, Volume 3 (Google eBook)

This entry was posted in 11th Generation, Line - Miller and tagged Haverhill. Bookmark the permalink.