John Morton was Scots-Irish born in Northern Ireland.  John was born before 1755 as he was over forty-five in the 1800 census.   He married Elizabeth [__?__] in Ireland.

Reverend William Martin led over 500 families, members of his congregation(s) of Kellswater, Ireland to South Carolina between mid summer 1772 to mid January 1773 aboard five ships: Lord Dunluce, Hopewell, Pennsylvania Farmer, Free Mason, and the Snow – James & Mary subsequently obtaining land grants in areas of  Newberry, Abbeville, and Chester Counties, South Carolina John Morton sailed on the Lord Dunluce that left Larne, County Antrim, Northern Ireland on  4 Oct 1772 and arrived in Charleston, South Carolina on 20 Dec 1772.  John died in 1806 in Chester County, South Carolina and his will was probated 2 May 1806.

Child of John and Elizabeth:

In 1750 Presbyterians from Octoraro, Virginia, and North Carolina, came to South Carolina and settled at Rocky Creek, Chester County. By 1755 Irish immigrants, many of them Covenanters, began arriving. Various groups (Associate, Covenanter, Burgher, Anti-Burgher, Seceders) formed the “Catholic” (meaning a union of various groups of Presbyterians) church on Rocky Mount Road, 15 miles southeast of Chester. In 1770 Covenanters began holding society meetings and wrote to Ireland for a minister. Reverend William Martin answered the call in 1772.

Several Presbyterian pastors led their congregations in emigrations from Ulster to American in the decade following Doctor Clark’s emigration from Ballybay in 1764. Nearly 500 Scotch-Irish families arrived in South Carolina on the eve of the Revolutionary War.

The impetus for the colonization was the combination of exorbitant land rents in Northern Ireland, sometimes provoking violent resistance, and the offer of free land and inexpensive tools and provisions tendered by the colonial government of South Carolina. For instance, each Scottish Covenanter was entitled to 100 acres for himself and 50 acres for his spouse, and an additional 50 acres for each child brought to South Carolina.

The most notable of these was the emigration of Covenanter Presbyterians in 1772 from the area of Kellswater in central county Antrim.   Faced with this crisis and opportunity, Reverend William Martin persuaded his parishioners that they had nothing to lose by leaving Ulster, and before long he was in charge of a small fleet of vessels bound for South Carolina.  The Reverend Martin settled in the general area of Abbeville, South Carolina (Rocky Creek in Chester County).  After his church was burned by the British in 1780, he took refuge in Mecklenburg County, North Carolina.

On Friday June 29,  2007 a large crowd gathered at the Shanaghy and Vow Road junction to mark the 250th anniversary of the ordination of Rev William Martin. Rev Martin was the first Covenanter (Reformed Presbyterian) clergyman to be ordained anywhere in Ireland and this was not the only significant mark he made in history.

Rev. William Martin Memorial 250th Anniversary of Ordination Jun 27, 2007 At The Vow, near Movanagher, on the banks of the River Bann south of Ballymoney

William Martin was born near Ballykelly but finished his education in Dumfries, Scotland. On 2nd July 1757, he was ordained a Covenanter minister in an open air service held at The Vow, between Ballymoney and Kilrea. As the only Covenanter minister in Antrim and Down, the two counties became his parish, so to speak, and Rev Martin, though resident at Kellswater, had supervisory responsibility for Covenanter groups at Ballymoney, Dervock, Cloughmills, Leighmore and Cullybackey.  (See Google Maps Driving Directions

Rev William Martin was no shrinking violet. On top of his mammoth preaching and pastoral duties, he was vocal in his opposition to the High Church (Anglican) authorities who openly discriminated against those whom Martin represented. The oppressed Presbyterians were subjected to excessive rent demands and when payment could not be found to cover them, the tenants were evicted. After much prayerful deliberation, Rev Martin recieved a call to Rocky Creek, a small settlement in South Carolina.

In 1772, around a thousand Covenanters and others, including Roman Catholics, left Ulster under the leadership of Rev Martin. It took 5 ships to ferry the emigrates to the New Country, namely the James and Mary, Lord Dunluce, Pennsylvania Farmer, The Hopewell and The Freemason. Most of those on board the ships came from Ballymoney, Kilraughts, Derrykeighan, Ballyrashane, The Vow and Kellswater. It was a tremendous feat at that time to lead so many people so far in such vessels yet this only goes to illustrate the determination of Rev William Martin.

Although, due to the excessive numbers involved, the large group was scattered throughout the New Country, the majority settled in and around Rocky Creek. In 1774, Rev Martin’s congregation opened their own meetinghouse and he began a prosperous ministry. When the War of Independence broke out, he supported the Patriots (Americans) against the British and openly urged others to do so too.  James Anderson was but one Ballymoney native to heed the call and die at the hands of the British in that war. Rev Martin had his meetinghouse burned down in 1780 and was himself imprisoned for his patriotism.

The emigrants led by Reverend Martin traveled to Charleston, South Carolina, in five ships from Belfast, Larne, and Newry, and settled throughout western South Carolina, many in the Abbeville area.

Rev. William Martin  was born the oldest son of David Martin of Londonderry. The Rev. Martin was the only Covenanter minister in counties Down and Antrim at the time. In 1760 he resided at Kellswater. He had oversight responsibility for societies at Cullybackey, Laymore, Cloughmills, and Dervock. He preached also in Londonderry and Donegal. The Presbytery was founded in 1743 and Kellswater became the center in 1760. 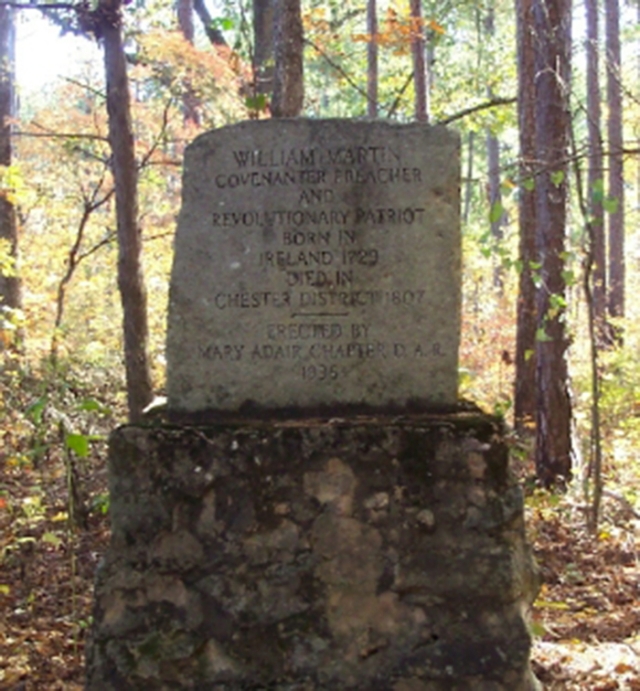 When the Revolutionary war broke out, Rev. Martin was a strong supporter of the patriots. In 1780 he preached another of his fiery sermons, reminding the congregation of the hardships that their fathers had suffered, that they had been forced out of Scotland and again out of Ireland, had come to America where they were free men and where they had built their homes and church. Now the British were coming and would once again drive them from their homes. He told them that there is a time to pray and a time to fight and the time to fight had come. Immediately after the sermon, two companies were formed under command of Ben Land and Captain Barbour. The next day they joined the American forces fighting the British. For his efforts, the British burned the church and took Rev. Martin prisoner.

John MORTON sailed on the Lord Dunluce that left Larne on  4 Oct 1772 and arrived in Charleston on 20 Dec 1772. This is the only ship that listed “Rev. Wm. Martin (Kellswater)” as an agent. The original sailing date was to have been August 15. The sailing was delayed until August 20, and then rescheduled for September 22. On August 28, the ship announced that passengers must give earnest money by September 5 since a greater number had offered to go than could be taken. On September 15, the ship advertised that, since some families had drawn back, two hundred more passengers could be accommodated.  Reverend Martin was on this ship when it finally sailed on October 4. One man and several children died of smallpox on the trip.

Will of John Morton, of Chester County, South Carolina

“In the Name of God Amen I John Morton of Chester County & State of South Carolina being weak in body but of Sound Memory (blessed be God) Do this twenty fifth day of May in the year of our Lord one thousand Seven hundred & Ninety Nine & in the twenty third year of American Independence Make & publish this My Last will & testament in the following Manner Viz,

I give & bequeath unto Elisabeth Morton My beloved wife dureing her widowhood but if she Marries an other Man I do not allow her to have any thing but hir body Cloths & hir wheel & her Chest but if She remains a widow till her Death I allow her to devide her part as she think proper among My Daughter Marthas Children but I Do Not allow any other pirson to get any part of My Estate.

Next I give & bequeath to My grandson John Morton McCaw one hundred acres of Land on which I Now Live with it appurtenances & all the benifits arriseing from it after My Death and I also allow him to git My pocket bible My Silver Sho Buckels & Stock Clasps & two guineys to be paid for hir schooling.

Next I give & bequeath unto My granddaughter Tenney [Jenney?] one hundred acres of Land, which I Surveyed Joining the plantation on which I Now Live. I also allow her to git my Large Bible psalm book and Rutherfords Lettters, and a gown of her own Choosing.

This other John Morton married Jane Peden who  was one of two women from South Carolina to receive a bronze plaque on her grave for service in the Revolutionary War.  Jane and her sister would pick up wounded soldiers from the battlefield near their home in South Carolina, take them to their home and treat the soldiers’ wounds.  Jane Peden is buried in Morgan County, Alabama, near Somerville in the Morrow Cemetery.

John Peden was born June 1709 in Ireland. Margaret McDill was born August 1715 in Ireland to John McDill and Janet LESLIE. She was called Peggy by her family. John and Peggy were married in 1730 at Ballymena Parish, Ireland. The family lived in the County of Atrium, Ireland.

They were the parents of::

John Peden served as a Ruling Elder in his native country from his youth and was a decided advocate of the Presbyterian system of worship. He and his family were very disturbed over the persecution of the Church in Ireland and joined Reverend William Martin who lead a group of Scotch-Irish immigrants to the back country of South Carolina. They were given grants by the government to settle this wilderness area.

The first of the Pedens to come to South Carolina were John and Peggy’s son Thomas and their daugher Jane and her husband John MORTON who came in 1768 on the Snow Mary and James. They arrived from Larne, Ireland in Charleston and were administered the oath on 12 January 1768.  Five years later the rest of the family arrived in October of 1772 on the same ship the Snow Mary and James. [Our John Morton came in this fleet of five ships]  They were forbidden to land because some of the people aboard had Small Pox. They were quarantined on the vessel for several week and a house on Sullivan’s Island was provided for the sick. On 1 December 1772, an entry was made in the Council Journal that contains the names of those we know arrived on the Mary and James. As was the custom a letter was written to Ireland stating that the ship had safely arrived and thanking the Captain Workman for his good delivery. This was published in the Belfast New Letter, 21 December 1772. John Peddan, James Peddan, and Thomas Madill signed the letter .

Most of the children settled around Fairview Presbyterian Church, on the waters of the Reedy River in the Greenville District although some had original grants in Fairfield or Chester Counties. During the Revolution, John, Peggy and some of their children went to Rocky Creek area of Chester County near Catholic Presbyterian Church where Rev. Martin was located