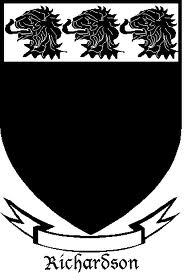 Thomas Richardson of Standon, Hertford, England was born about 1570.  He married Katherine DUXFORD of Westmill, also in Herfordshire on 24 Aug 1590.  Unfortunately, the earliest surviving parish register of Standon does not begin until 1671, so that source of information regarding Thomas Richardson’s parentage is cut off.   Thomas was buried 8 Jan 1633/34 at Westmill, Herfordshire, England.

Katherine Duxford born about 1570.  Her parents were Thomas DUXFORD and Catherine [__?__] of London and Westmills.  Katherine was buried 10 Mar 1631/32 at Westmill.

Children of Thomas and Katherine:

Thomas’ will indicates that he was a farmer in moderate circumstances. The Puritan influence was very strong in several parishes not far from Westmill, where the Richardson lived after their marriage, and this as well as the prevailing hard times may have motivated the emigration of three sons of the family to New England, for of the many American families of whom it is said that “three brothers came over from England” (in the great majority of cases said falsely) the Richardsons area an exception in that the statement is true.

He left his wife Katherine for her life, “my littell close of pasture called little hunnymeade, cont[aining] half an acre” and after her death to his son Samuel and his heirs. To his son John 40s. to be paid within three years after his and his wife’s deaths. To his son James, 12d. To his son Thomas, 3 pounds to be paid within five years of his and his wife’s deaths. To his wife Katherine, all his movable goods for her life and thereafter to his son Samuel who was named executor. Witnesses: Richard Baker, Philip Baker.

Three of Thomas Richardson’s sons and his grandson immigrated to America.  Richardsons Row Woburn, Mass is named for them.

1647 – The three brothers lived near to each other, on the same street, which has ever since been known as “Richardson’s Row.” It was by the town laid out as a street in 1647, and the three Richardsons are in the town book represented as then living upon it.  Since Woburn was first settled near Horn Pond, this  Google Map Street View of Richardson Street in Woburn is probably the same place.

There is no baptismal record of this son in the Westmill register and he may have been baptized in his father’s parish of Standon.  There is no doubt that Thomas Richardson was his father, however, in spite of the fact that he was not mentioned in Thomas’s will.

It is probable that Thomas, the father, gave Ezekiel his share of his estate to help pay for his passage to New England in 1630. ” Richardson was undoubtedly a passenger on one of the ships in the Winthrop fleet which left England in the spring of 1630.  Eleven of the vessels had arrived by July 6 of that year, and most of the voyagers settled with their govenor at Charlestown at the head of Boston harbor, where Exekiel Richardson and Susanna his wife became members of the First Church on August 27, 1630.

It was not long before Winthrop, and the church with him, moved to the neighboring peninsula which became Boston.  The Richardsons remained in Charlestown, however, and were dismissed with others to form a new Charlestown church on October 14, 1632.  On April 1, 1633, Ezekiel was appointed constable of “Charlton” by the General Court “for the year next ensuing & till a new be chosen,” and in 1635 he was himself a deputy from Charlestown to the Court, which met in New Town (Cambridge).  He was elected a member of the town’s first board of selectmen on February 10, 1634/5, and served also in 1637, 1638 and 1639.  On September 19, 1637, he was on a “Jury of Life and Death” when three persons were found guilty of adultry, one of murder, and one acquitted on the charge of murder.”

1632 – Phebe Richardson, Ezekiel and Susannah’s first born child is born. She is the tenth child born in the Massachusetts Bay Colony. Actually, the June, 1632 date is the date of her baptism. Some genealogies list her place of birth as “possibly England”. I think it more likely she was born on American soil sometime after the Winthrop Fleet arrived and then baptized in 1632.

1640 – The three Richardson brothers, with others, are commissioned by Governor John Winthrop to establish a colony at Woburn, Massachusetts.

1647 – Ezekiel Richardson dies in Woburn. He must have been a relatively young man, probably under 45, per estimate of Vinton. His oldest child, Phebe, had been baptized only 15 years earlier. His widow, left with seven children, remarried Henry Brooks four years later, in 1651.

“Ezekiell Richardson of Woebourne” appointed “my wife Susanna and my eldest son Theophilus joint executors”; and bequeathed to “Josias my son £30” at twenty-one years of age; to “James my son £30” at twenty-one years of age; to “Phebe my daughter £30” at “twenty years of age or within six months after the day of her marriage”; if any of these three should die before they come of age, the legacies be shared among the survivors; in case “my son Theophilus die before he shall accomplish one and twenty years of age, then his portion shall be equally divided to my other children”; discharged demands against “my brother Samuell Richardson”; to “my brother Thomas Richardson, his son Thomas, 10s.”; overseers Edward Converse and John Mousall of Woburn, if either of these die, then the survivor with the consent of Thomas Carter, pastor of the church in Woburn, to choose a replacement overseer; 30s. to each overseer; residue to my executors, “provided that my wife may peacably enjoy her habitation in the house so long as she shall live” [ SPR Case #72].

The inventory of the estate of Ezekiell Richardson was taken 18 Nov  1647 and totalled £190 6s. 6d., with no real estate included [SPR Case #72].
On 6 Mar  1649/50 Edward Converse confirmed to the heirs of Ezekiel Richardson an earlier sale of twelve acres of meadow & upland in Woburn [ MLR 2:71]. On 27 Mar 1651 Samuel Richeson of Woburn “having formerly sold unto Ezekill Richeson my brother (who is since deceased) forty acres of arable & meadow land” in Woburn, confirms the same to “my sister Susanna Brookes (who was the wife of my deceased brother Ezekill Richeson” [MLR 2:72]. On 23 Mar 1654/55 “Susanna Richeson now Brookes formerly the wife of Ezek: Richeson” confirmed a sale made eight years earlier by “Ezekill Richardson & Sussanna Richardson my wife” to Thomas Moulton and John Greenland of thirty-five acres of land in Woburn [MLR 2:36]. On 13 Dec 1659 “Henry Brookes & Susanna Brookes of Woburn,” in accordance with an award of the court, deeded to Theophilus Richardson the right and title they had in “the moiety or half part of the housing & land of Ezekiell Richardson of Woburn aforesaid, by executorship or otherwise” [MLR 2:154].

Further, the said Thomas Richardson died possed of one Dwelling House, Barn, and One hundred acres of Land, situate in the Town of Woburn, of which 25 acres are plowed land, and ten of meadow, Real Estate valued at 80 pounds. He is indebted the sum of ten pounds, ten shillings. The two steers formerly forgotten, 4 pounds ten shillings. Following the inventory, and it would seem a part of it is this statement: ‘He hath left a wife, three sons, and four daughters. The eldest son is 8 years old; the second, 6 years; and the third, three-quarters [of a year]. The eldest daughter is 13 years old; the second, 11 years; the third, 4 years; the fourth, 2 years.’

Samuel and Thomas were on a committee to lay out lots (of land) for hayfields 1 July 1636.

Children of Thomas and Mary 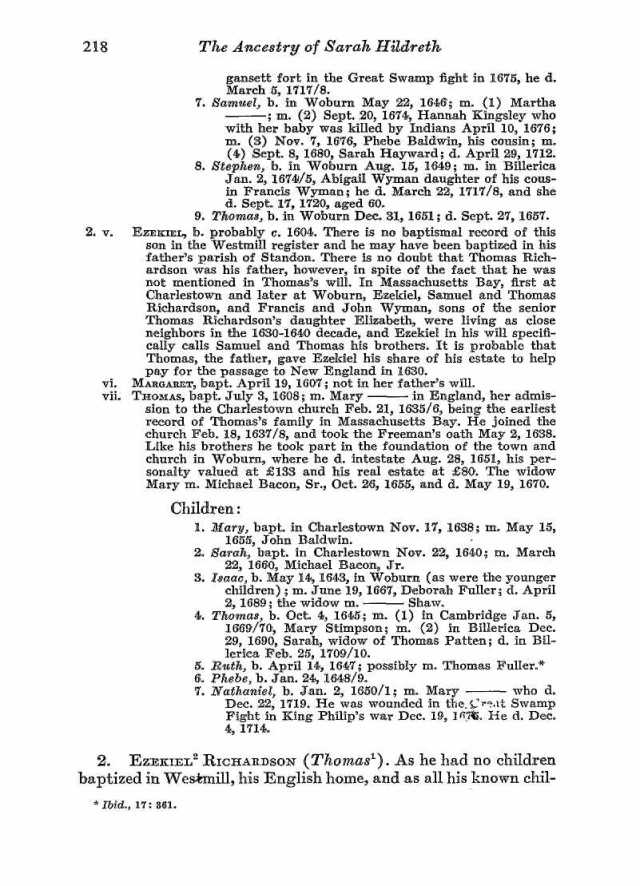 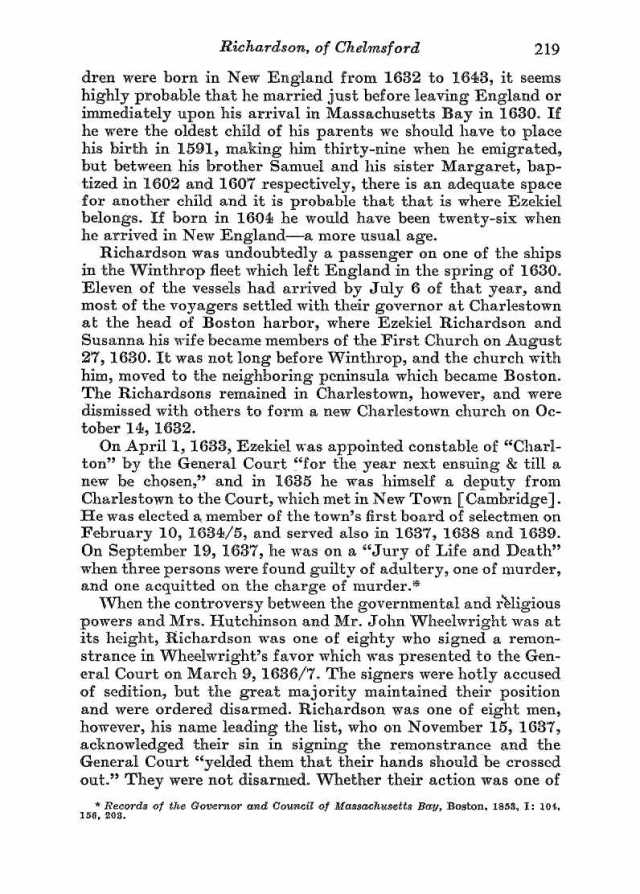 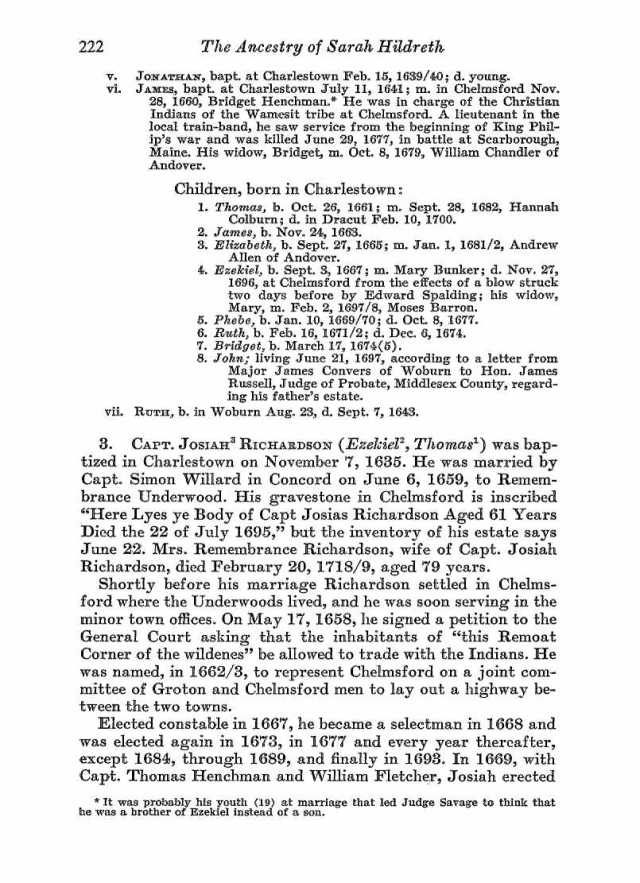 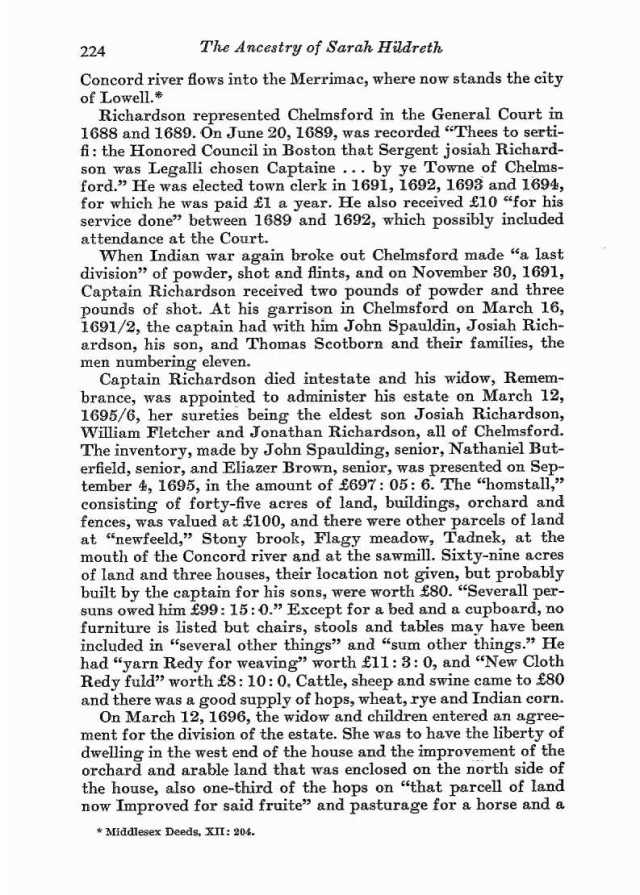 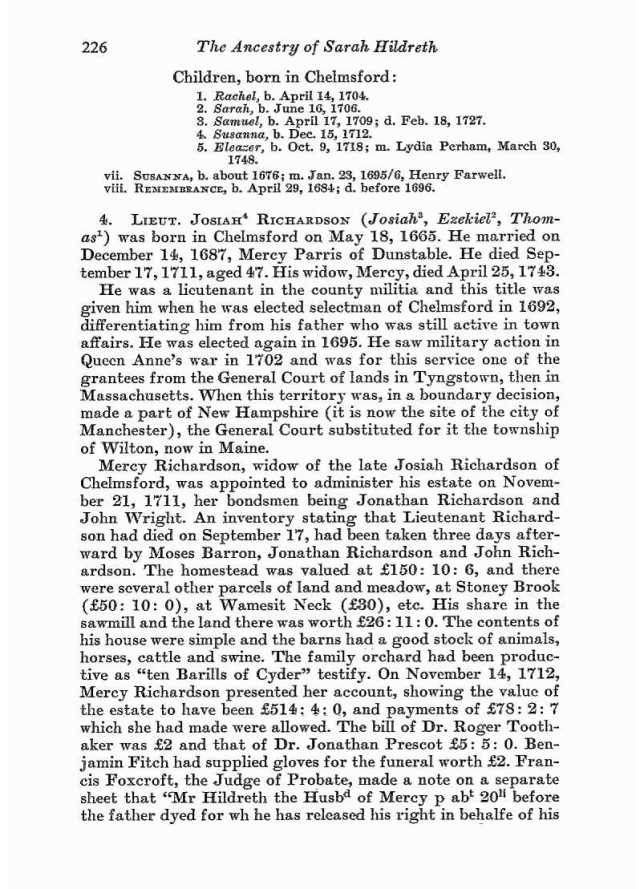 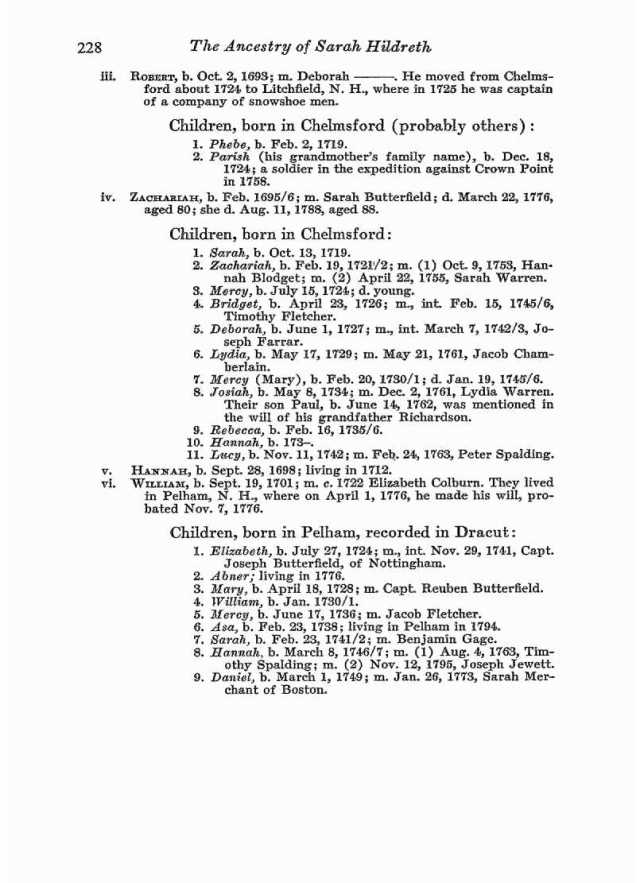