William Ring was born about 1565 in Pettistree, Suffolk, England.  His parents  are not known.   He married Mary DURRANT 21 May 1601 in Ufford, Suffolk, England.   William had been aboard the Speedwell, sister ship to the Mayflower, intending to voyage across the Atlantic in 1620. William was, however, among the passengers who could not fit aboard the Mayflower when the Speedwell was deemed unseaworthy. He returned to Leiden and died there sometime between 1620 and 1629. 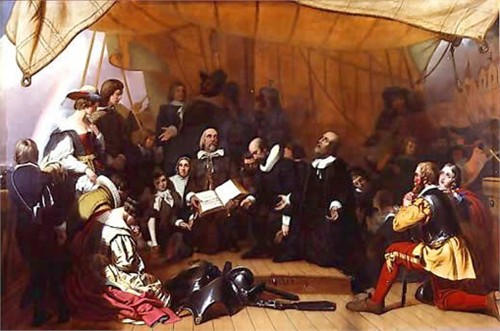 The Pilgrims on the Speedwell

Mary Durrant was born about 1584 in Ufford, Suffolk, England.  Her parents were Thomas DURRANT and Mary [__?__].   Mary was a member of the Leiden Separatist community.   She arrived in Plymouth in 1629 or 1630 most probably on the second Mayflower, which sailed from Gravesend in March, and landed at Salem MA. on 15 May 1629, bringing 35 passengers, several of whom were from the Pilgrim colony which had been living for a number of years in the Netherlands.   Mary Ring seems to have some education : she signed her will herself and her inventory contains books. She also seems to have been a woman of business, with money owed to her by William Bradford and Edward Winslow.  Mary died 15 Jul 1631 om Plymouth, Plymouth Colony.

Mary Ring wrote a will, and an inventory of her estate was taken at her death.

Children of William and Mary:

The parish registers of Ufford, Suffolk Co., 1558-1630 are  the following entries that are believed to be the same individuals: 1601:  Wylliam Ringe of Ptetistrey singlman and Marie Durrante of Ufford single  woman weare married together the 21 of May 1602: Elizabeth Ringe the  daughter of William Ringe and Marie his wife was baptized the xxiij day of Februarie” (1602/3)

William was a weaver and member of the Separatist community in Leiden Holland, and a devoted follower of the Pilgrim’s pastor, Mr. John Robinson. The family is known to be present in Leyden by 1614. These Separatists had  found the English church, once Catholic, now Anglican, to be irredeemable  and sought to remove themselves from the world, rather than fight and die as martyres. Crossing to permissive  Holland after 1605, the group spent their first year in the roaring port  of sinful Amsterdam (where abject poverty juxtaposed with wealth “confronted them like an armed man”). Fearing for their communal  continuity, they then retreated into the academic quiet of nearby Leyden.  The distance was not enough, and so the colony arranged to transplant itself to the new world in 1620.

William was guaranteed by William Bradford and Alex Price on June 7, 1619. (Guaranteed mean’t vouched for and sworn in.)  When the “Speedwell” sailed from Delfthaven on July 22, 1620, William was aboard.

Though the settlers continued from England in two ships, the Speedwell had to return to England due to dangerous leaking, and the Mayflower continued alone. According to Capt. John Smith, writing in 1622, ‘They left the coast of England the 23 of August, with about 120 persons, but the next day the lesser ship sprung a leake, that forced their return to Plimoth, where discharging her and 20 passengers, with the great ship and a hundred persons besides sailers, they set saile againe the Sixt of September.’

At Dartmouth, on August 17th, after leaks forced the ship into port, one of the separatist leaders,  agent Robert Cushman wrote that “Poor William Ring and myself do strive who shall be meat first for the fishes, but we look for a glorious resurection.” When the “Mayflower” set out alone on September 6th, neither William nor Mary were aboard.

Here is a link to the full text from Mary’s will: http://www.pilgrimhall.org/willmring.htm

Elizabeth and Stephen’s daughter Miriam was born at Plymouth about 1634.   On  31 Jan 1692/93 she became the  second wife our ancestor John WING II  (1611-1699). She is interred at Dillingham Cemetery.  Miriam’s will dated 24 May 1701 proved 8 Jan 1702/03 gives all her property to Dean Smith, “son of my Kinswoman, Bethiah Smith of Monomoy.”  Bethiah was Miriam’s niece, daughter of her sister Susannah Dean and Stephen Snow.

Robert Charles Anderson, in his 1995  The Great Migration Begins cited George Ernest Bowman’s comments of 1901 as still being definitive. In a footnote in volume 3 of  Mayflower Descendant Bowman presented a simple and convincing argument. Not only had he (and he must have been the premier student of the Mayflower in his time if not of all time) never found “a single record which even remotely indicates the existence of any kinship,” but he had found several records which prove “conclusively that they were not father and son.” Of these Bowman cites three. There is a court case in which Francis was the plaintiff and in which Josias sat on the jury and Bowman points out that the court would not allow a son to sit on a jury judging the father. Bowman cites an agreement which the court would have required to be signed by all of Francis’s living children which Josias, who was alive, did not sign, and a deed which states that it is made by all the children and which does not include Josias. (MD 3:97)

However there are old books, some made newly available on CD and online which make the claim that Josias is a son of Francis. One such is  Signers of the Mayflower Compact  by Annie Arnoux Haxtun, which was first published in 1897-1899 and was reprinted by Genealogical Publishing Company. “The argument now [that Josias is not the son of Francis] is founded not upon what was said, but what was not.  Some say certainty is self-evident and requires no assertion, but I’m including because the question comes up quite often.

Children of Elizabeth and Stephen

i.  Elizabeth Deane b: 1630 in Plymouth, Plymouth Colony

ii. Merriam Deane b: 1633 in Dorchester, Massachusetts Bay.  Miriam is the oldest first time bride in our family tree.  She was 59 when she married our ancestor John WING as his second wife.   She is interred at Dillingham Cemetery.  Miriam’s will dated 24 May 1701 proved 8 Jan 1702/03 gives all her property to Dean Smith, “son of my Kinswoman, Bethiah Smith of Monomoy.” Bethiah was Miriam’s niece, daughter of her sister Susannah Dean and Stephen Snow.

Children of Elizabeth and Josiah

After Anna died, Mark married 9 Jan 1660 in Eastham to Jane Prence (daughter of Gov. Thomas PRENCE) and had eight more children between 1661 and 1679.

There were two woman named Lettice [joy in Latin] in early Plymouth.   Lettice Hanford and Lettice Kempton  are often mixed up with four marriages between them.  There is only one recorded death:  22 Feb 1691.  Here’s my crack at unsorting the tangle.

After Edward died, she married Edward Jenkins (1618  Kent, England – d. 1699 Scituate, Plymouth, Mass)  On 4 March 1634/5, “Edw[ar]d Jeakins,” one of seven servants of Nathaniel Tilden of Tenterden, Kent, was included in the list of passengers of the Hercules of Sandwich.  Lettice and Edward had 3-4 children: Samuel (b. 1645), (probably) Sarah Bacon, Mary Atkinson Cocke, & Thomas.  In the late 1660s and early 1670s Edward Jenkins had to come to the aid of two of his children who experienced a number of problems. On 5 Mar 1666/67, “Dinah Silvester, Sarah Smith, and the daughter of Edward Jenkens, [are] summoned to the next court.

Children of Andrew and Deborah:

i. Samuel Ring b: 1649 in Plymouth, Plymouth Colony