John Willey was born 24 May 1699 in East Haddam CT.  Some say his parents were Isaac WILLEY II and Rose BENNETT. But it is more likely that they were John WILLEY II and Elizabeth HARVEY.  Isaac and John were brothers.  He married Sarah SAUNDERS on 5 Apr 1722 in East Haddam.   John died on 13 Nov 1743 in East Haddam, CT.

Children of John and Sarah:

Some genealogies say that the John Willey who married Elizabeth Marshall was David’s son, but it seems more likely that he was the son of Benajah Willey and Rachel Dutton.

John had an illegimate son with Mindwell Scoville, John Willey Jr. ( b. 2 Jan 1789 – d. 21 Oct 1879) After the birth of this child he ran away, and was gone several years. When he returned he lived with his  eldest daughter Abigail till his death.

Child of David and Abigail Cone:

The only way Abigail’s 1753 baptism date matches up with her 1761 marriage and 1762 first child is that she was born several years earlier.

In the French and American War in 1759, William was in Capt. Joseph Spencer’s company. Col. Nathan Whiting’s 2nd Connecticutt Regiment.

Lyman earned a reputation as the most experienced colonial American officer during French and Indian War. In 1759  he was with Lord Amherst at the capture of Crown Point and Ticonderoga and in 1760 took part in the expeditions to Oswego and Montreal. In 1762 he commanded the colonial contingent of Lord Albemarle‘s army in the capture of Havana. (See my post Battle of Havana – 1762)

Abigail last know to be in Genesee Co., NY.

David was living in Lempster, Sullivan, New Hampshire in the 1776 state census.

In the 1790 census, David was living in Lempster, Cheshire, New Hampshire with a wife and a son under 16

Children of David and Rachel Spencer:

Ahimaaz settled in Wilbraham, Hampden, Mass. , where he was one of the petitioners in 1805 to the Legislature, for the incorporation of the M.E. parish in W. Ludlow, and Springfield.

Wilbraham was first settled in 1730 by Nathaniel Hitchcock along with what is now Hampden, Massachusetts as the Fourth District of Springfield. It was also known as the Outward Commons, Mountains or Springfield Mountain. Hitchcock built a log hut along what is now Main St. Hunting and logging occurred in the late 17th century.

The Wilbraham town center is among the largest designated historical areas in the country, with fine examples of colonial and Victorian homes from as early as the 1730s along the historical areas of main street. The oldest Methodist meeting house in New England is located in the town’s center, as is the campus of Wilbraham & Monson Academy, founded in 1804.

Ahimaaz  was son and successor of Zadok in the office of high priest (1 Chronicles 6:8, 53). On the occasion of the revolt of Absalom he remained faithful to David, and was of service to him in conveying to him tidings of the proceedings of Absalom in Jerusalem (2 Sam. 15:24-37; 17:15-21).

Marion is an interior town near the center of the county, about 20 miles east of Rochester, New York and 50 miles west of Syracuse, New York.   Marion was part of the Phelps and Gorham Purchase.  The area was first settled around 1795.

The regiment was called up at Walpole, New Hampshire, on September 21, 1777, as reinforcements for the Continental Army during the Saratoga Campaign. The regiment marched quickly to join the gathering forces of Gen. Horatio Gates as he faced British Gen. John Burgoyne in northern New York. The regiment served in Gen. William Whipple’s brigade of New Hampshire militia. With the surrender of Burgoyne’s Army on October 17 the regiment was disbanded on October 27, 1777.

Incorporated in 1791, Goshen was first settled in 1768 as a part of Saville (now Sunapee). The name Goshen may have been taken from Goshen, Connecticut, where many residents had relatives.

Children of David and Rachel Church: 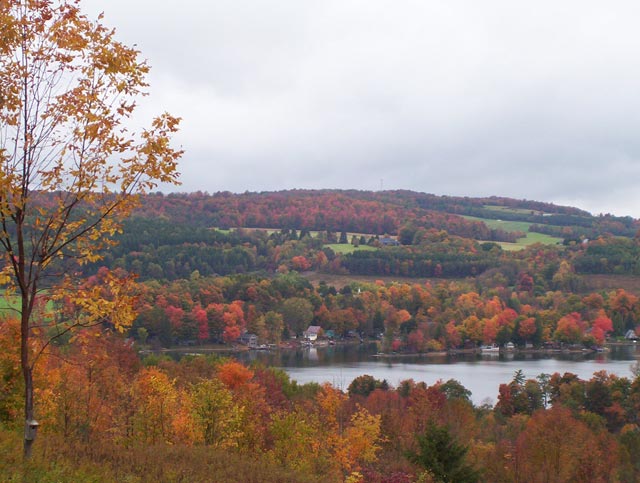 Typical scenery of the Hamilton area in the fall season.
Hamilton township is the home of Colgate University founded in 1817.

In the 1860 census, Jeremiah and Hannah were living with their youngest son Omri in Hamilton, Madison, New York

Children of Jonathan and Mary

In the 1820 census, Clement had a household of nine in Tiffin, Adams, Ohio, a few miles north of the Ohio River, 75 miles east of Cincinnati

Green is a common first name in the Hungerford family.

In the Revolution, Green was a private in the Connecticut Militia. He was placed on the pension roll in Genesee County New York on 26 Jul 1833 with an annual allowance of $40.00. His pension commenced 4 Mar 1831 with $100.00 received.

In the 1800 census, Green was living in Canandaigua, Ontario, New York with a household of 5. The town was first settled around 1789. Canandaigua officially became a town in 1791.

David Bristol Sr. bought 400 acres in Ohio as a member of the Scioto company and was a signer of the articles of agreement  executed Dec 14 1802 in Granby Mass. They paid $1.25 per acre to GeneralJonathan Dayton of Elizabeth Town NJ and Dr. Jonas Stanberry of New York City. David Sr. died in 1820 in Ohio.

The Scioto Company was a French institution whose option on 4,000,000 acres expired in 1790 and sold  worthless deeds in the Northwest Territory, later Ohio, to French colonists. The French settlers  arrived in 1791 and later bought their land again at Gallipolis, from the Ohio Company,  for the same $1.25 per acre that Bristol paid.  The US government also granted to them 24,000 acres  in the southern part of what is now Scioto County, Ohio in 1795,  known as the First French Grant.