Stephen Jordan was born around 1589 in Denham, Suffolk, England.  He married Susannah PEACOCK or PEABODY around 1614 in Denham, Suffolk, England.  He sailed with his family sailed for America on the ship “Mary and John“.  Stephen took the oath of supremacy and allegiance on 24 Mar 1633/34, a necessary act in order to sail.  He settled in Ipswich.  After 1655 he married Susanna Wolterton, the widow of Nathaniel Merrill and moved to Newbury.  Stephen died 8 Feb 1669/70 in Newbury.

Passenger lists only had the names of adult males who took the requried oaths before sailing, but presumably Stephen was accompanied by his wife (there is not record of her in New England, nor is there record of her death in England) and daughters.

Susannah Peabody was born in 1585 in Wherstead, Suffolk, England.

Children of Stephen and Unknown:

1636 – Granted a house lot, three rods of ground lying in Stony Street leading to the river, first granted to [our ancestor] Humphrey BRADSTREET,  next door to one owned by his son-in-law Thomas CROSS.

5 Mar 1639 – The town of Ipswich recorded a grant to “Stephen Jordaine” of “a houselot, about three rods of ground, more or less, lying in the Stony Street …, also a planting lot of six acres of ground, lying on the south side the Town River …, also twenty acres of meadow and upland at the West Meadows, this meadow six acres … the upland fourteen acres”

26 Mar 1650 – One of four men excused from militia training, probably because he was over 60 years old.

20 Dec 1653 -“Steven Jordan of Ipswich” sold to “Jno. Pickard of Rowley … twenty-five acres of land, which is in length one hundred rod & in breadth forty rod” .

1653 – Stephen, [our ancestor] Robert CROSS, and William Whites agreed to tend 30 sheep owned by Simon Bradstreet, with provisions for the division of the wool and meat at the end of the season. They were turned over to Cross’ two boys, Robert and Stephen.  The boys were possibly careless – they said that many of the sheep were killed by a great bear – and Bradstreet sued their father and grandfather in 1657.

26 Mar 1659 – “Stephen Jordon of Ipswich” sold to “Samuell Younglove Junior of the same town & county all that his now dwelling house, with the land about it, being two acres more or less, with the barns, yards, orchards, gardens and all the appurtenances & privileges thereunto belonging … in Ipswich aforesaid on the south side the river, … also six acres of meadow at the West Meadows”

1669 – Stephen was in a very weak physical and was not able to support himself and his wife and was in debt.  His sons-in-laws Cross and Andrews came to his aid with “Indian corn, wheat, sugar currants, veal, ‘a Largd Red Wastcoat’, all valued at £2:80:00, and cattle worth £20.  These last Susanna Jordan sold without making an accounting.”

In his will, dated 5 April 1667 “Stiven Jorden of Newbery” bequeathed to “my daughter Croose of Ipswege fifteen pounds which is in her husband’s hand already”; to “my daughter Androse of Ipswich fifteen pounds which is in her husband’s hand already”; “for my house and land in Newbery I give it to my wife during her natural life and after her decease I give it to Stiven Croose the son of Robort Crose of Ipsweg my son-in-law”; to “my wife” two cows and half the household goods; to “my sons Robart Crose and John Andros” the other half of the household goods equally divided between them; “Stiven Crose shall give to his kinswoman and my grandchild Elezabeth Androse out of the land given unto him the sum of five pounds”.

28 Mar 1671 – “Robert Crose Senior and John Andrews Senior” successfully sued “Susana Jordan, widow of Stephen Jordan, for withholding one-half of the goods the late Stephen Jordan bequeathed to them in his will, also some other legacies from said Jordan, under color of an order of Ipswich court and surreptitiously obtained for want of true information is plaintiffs’ absence, dated Nov. 29, 1670”.

EDUCATION: Signed his deeds. Signed a deposition of 11 August 1667 and his will by mark. His inventory included “one great Bible” valued at 10s. 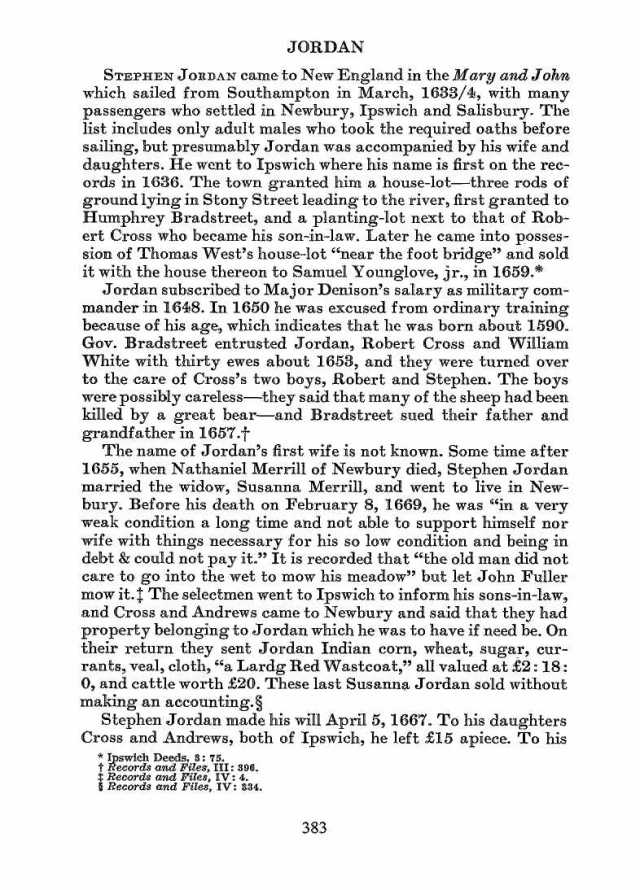 This entry was posted in 13th Generation, Immigrant - England, Line - Shaw and tagged Ipswich, The Mary and John 1634. Bookmark the permalink.