I like the story of a 328 year old hoax better than the real thing ….

From the NEHGS New England Historical and Genealogical Register of July 1984, pages 182-185 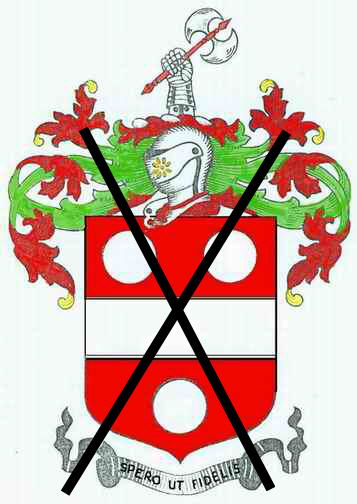 By  John A. Miner and Robert F. Miner

For over a period of perhaps some three hundred years, descendants of Lt. Thomas Minor, as well as students and writers of history and genealogy, have accepted a certain coat of arms and the seventeenth-century essay detailing Thomas’s heritage as fact. The Register published the “Herauldical Essay Upon the Surname of Miner” as well as the supposed Miner coat of arms (v13 [1859]: p161-164; v82 [1928]: p160).

The authenticity of these artifacts remained unquestioned until the fall of 1979 when some 75 descendants journeyed to Chew Magna, Somerset, England, Thomas’s birthplace, to commemorate the 350th anniversary of his departure for America. To recognize the occasion, a marble plaque honoring Thomas Minor was affixed to an inner wall of St. Andrew’s Church where he was baptized in 1608. His coat of arms was to have been placed above the plaque, but this was delayed pending approval by the bishop following the customary search and recommendation of the College of Arms.

In late November 1979, the Chester Herald, D. H. B. Chesshyre, M.A., F.S.A., of the College of Arms sent a letter to the Vicar of St. Andrew’s Church, stating he had “found no references to the Miners of Chew in any of the Herald’s visitations to Somerset and, thus, no confirmation of the arms which appeared to be very similar to those of a family of Mynors of Uttoxeter – but with a different crest.” Accordingly, he would not recommend the display of the arms in question.

The original essay, entitled “An Herauldical Essay Upon the Surname of Miner,” is now in the possession of the Connecticut Historical Society in Hartford. Designed to answer the question whether the surname should be spelled with an “e” or an “o”, it purports to explain the origin of the name by noting that a Henry Miner of the Mendip Hills in Somerset was given a coat of arms by Edward III for his services for the up-coming war with the French. This Henry was said to have been a miner, or mine operator; therefore, the name should be spelled with an “e.” The essayist went on to give the descent from Henry (said to have died in 1359) to Thomas and cited Thomas’s children. The coat of arms is colorfully displayed at the top of the scroll.

In view of the recommendation of the College of Arms, and after reviewing the findings of Roger Ashley, a Chew Magna historian whose study of the Chew Magna parish records indicated that the line of descent given by the essayist was not at all corroborated by the facts shown in those records, it was determined that more research would be valuable. Subsequently, John A. Miner and a cousin, Robert F. Miner, made independent study-trips to England. Meetings were held at the College of Arms, with Roger Ashley and others, and finally with Robin J. E. Bush, Deputy County Archivist for Somerset. After a full discussion of the problem between Bush and Robert Miner, and a review of Bush’s credentials as a specialist in medieval genealogy, he was engaged to conduct a thorough search as to the facts.

Bush reported that there was no evidence whatsoever for a visit to the Mendip area of Somerset by Edward III or any contemporary record of the Miner family as significant land owners in Somerset in the fourteenth or fifteenth centuries. There were no Inquisitions Post Mortem into Miner lands among those at the Public Record Office. The feet of fines, a form of medieval land registry, have been published for Somerset up to the reign of Henry VI, but no Miners are recorded. Bush also questioned finding the Christian name “Henrietta” in the essay, stating that he had never found it in any fourteenth century England records.

With respect to the coat of arms assumed (by) some descendants of Thomas Minor, the Herald’s College has registered no such arms as having been borne by any Somerset Miner, nor were any registered at any heraldic visitation for the county. The essay was likely written in 1683 as it names family members as living in 1683 at particular places. Yet a marginal note on the original document records the following: “This Coat of the Miners of Chew I attest to be entered at Bath in Somersett by Clerenceux [sic] the 4 of K. James the first, which visitation is in custody of me: 1606. Alex: Cunninghame.” The Clarenceux King of Arms in 1606 was actually William Cumden. Possible fabricators of the pedigree would include this Alexander Cunningham who attested it. There were two prominent men of this name in 1683, one a critic 1655(?)-1730, the other an historian, 1654-1737.

Bush uncovered from a compotus, or account roll, of Chew Magna manor for the year 1494-5, records of John Minere as one of four men who paid for the grass of 46 acres of meadow and Joan Minere as one of the widows who paid a tax known as churchscot. A William Myner was assessed in a lay subsidy (national tax) collected in 1523 in the tithing of North Elm in Chew Magna and paid 4d. on assessment of 2 pounds on his goods. (F. A. Wood, Collections for a History of Chew Magna, 1903, p84; original in Public Record Office).

William Miner may be possibly identified with William Mynard, who took a new grant of a messuage (house) and a fardel of land of old auster in Chew Magna on 29 June 1554, to be held on the lives of himself, his son Thomas and Thomas’ wife, Joan (Somerset Record Office DD/S/WH, box 41, court roll). William is the earliest member of the family from who a connected line of descent can be shown. He was the great-grandfather of the Thomas Myner baptized at Chew Magna on 23 April 1608.

1 Response to The Curious Pedigree of Lt. Thomas Minor