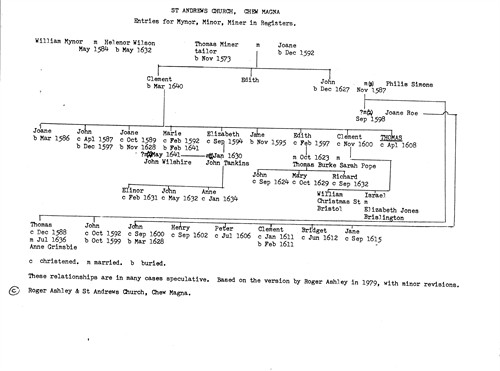 Clement Miner Sr – Family Tree – This is the most accurate information we have of Thomas Minor’s ancestry taken from the Registries of St. Andrew’s Church, Chew Magna, England. (First published in 1987).

Thomas’s father was William MINER (? – 1586) (Minor, Mynar)  William is Alex’s 13th Great Grandfather, one of 16,384 in this generation of the Miner line.  He is listed as a resident paying taxes (one of 13) in North Elm section of  Chew Magna, Somerset, England in 1523 (Paid 4p tax on goods assessed at 2£4s.). Wife unknown. He received a Chew Magna house and land grant on 29 Jun 1554 with his son Thomas and Thomas’ wife, Joan. He was buried at Chew Magna on 23 February 1585/86. He may be related to John Minere who appears on a Chew Magna manor account roll for the year 1494-5 as paying for the grass on 46 acres of meadow and to Joan Minere, a widow, who appears on that roll as paying a tax known as churchscot.

A Study, named “The Curious Pedigree of Lt. Thomas Minor” by John A. Miner and Robert F. Miner and published in the NEHGS Register of Jul 1984 (volume 138, pages 182-5), indicates that the contents of this document and the coat of arms it presents are FALSE.

Children of Edith and Thomas Bucke listed in Mary’s 1640 will:

Children of Clement and Sarah Pope

This entry was posted in 13th Generation, Line - Miner and tagged Thomas Miner. Bookmark the permalink.