John was born in Duxbury, Mass.   Because he was not treated as a minor (under 21 years of age) on 5 Mar 1660 when he was put on trial in Plymouth, MA court for the murder of his friend Joseph Rogers, he was probably born between 1635 when his father emigrated and 1640.   His parents were Edmund HAWES and  Lucy PENOCOT.  He married Desire GORHAM at  Barnstable, Cape Cod Plymouth Colony, on 7 Oct 1661.  He was appointed ensign of Yarmouth’s military Company and by 1700 was Captain,  He died at Yarmouth, Barnstable, MA, on 11 Nov 1701 after having his leg amputated or cut off.  The reason for the amputation is not known.

Desire Gorham was born at Plymouth  on 2 April 1644. She was the daughter of Capt. John GORHAM and Desire HOWLAND.  Her brother James GORHAM is also our ancester. She died at Yarmouth, Barnstable, MA, on 30 June 1700.  When the intestate estate of her father, Capt. John Gorham, was settled in March 1676/77, Desire was one of the married daughters who had already received 40 pounds but, if there should be an overplus, she and her married sisters were to share it equally with the other children. Desire also shared in the estate of her mother, Desire (Howland) Gorham in March 1683/84. Her husband was one of Desire Gorham’s sons-in-law who agreed that the children of Desire’s deceased sister, Elizabeth, should have their mother’s share. Desire Hawes died 30 Jun 1700.

Children of John and Desire all born in Yarmouth, Barnstable, MA.

John Hawes was a cutler.  One who makes, repairs, or sells knives or other cutting instruments.

As a young man John Hawes was involved in an incident that caused the death of his friend Joseph Rogers of Eastham.  Both had grown up in Roxbury and they had probably known each other for years.  It seems that the two were engaged in a fight, possibly a wresting match, at Eastham, Massachusetts on 25 Dec 1660, in which Joseph Rogers died. A court was convened at Plymouth in the presence of Governor Thomas PRENCE, John Alden, William Bradford and others assistants. John Hawes was duly indicted by this group.  According to testimony the incident occurred when John Hawes had given Joseph Rogers (1638 – 1660) “a most deadly fall.”  Rogers died 48 hours later.  A jury of 12 men was chosen, nearly all from Plymouth or nearby.  John was is not treated as a minor in his trial.   He was acquitted at the trial of 5 Mar 1660/61.  These brought in a verdict wherin they expressed that they found that the said John Hawes was not guilty, and soe according to law hee was cleared in the open Court and released.’

According to Court records,

Hawes says, ‘That he suffered no discredit on account of the sad affair is shown not only by his subsequent career, but by the fact that seven months after his trial he married a daughter of Capt. John Gorham, of Barnstable.’  on 7 Oct 1661.

On 4 Mar 1661/62 John Hawes was fined 10 shillings for “relating a scandalous report, for which he hath not produced sufficient ground for it.”

In 1668 he was appointed by the General Court of the Colony as receiver of excise for Yarmouth.  In 1669 he was on the grand jury and on 29 May 1670 he was made a freeman of the colony.

He was involved in another fight soon after this because John Gray was fined 3 shillings and 4 pence on 8 Mar 1670/71 for “breaking the King’s peace in striking John Hawes.

On 26 Feb 1672/73 the town of Yarmouth granted him the “broken Marsh” on the west side of the mouth of Lone Tree Creek near land already owned by him and the land of Edmond HAWES and John Miller.  On 23 Feb 1684/85, he was granted 10 acres on the north side of Dennis Pond near Hallett’s land.

In 1676 his tax was 3 pounds, 10 shillings and 6 pence out of the total for the town total of 297 pounds.  In 1677 he was constable of Yarmouth and in 1680 he was one of the surveyors of highways for that town.  On 10 Jul 1677 he was one of the two appointed for Yarmouth “to see the orders about and against the abuse of drink and liquors put in execution.”

It would seem that the beaching of whales was taking place in colonial times.  In 1680 John Hawes was one of four men who were “to look out for and secure for the town all such whales as by God’s providence shall be cast up in their several bounds.”  His territory was the western part of the town.  He was paid 4-5 pounds for each whale payable in blubber or whale oil.

On 31 Oct 1682, he was appointed ensign of the military Company of Yarmouth and about 1700 he was promoted to Captain of the Company. There was not evidence that he ever needed to lead these troops in wartime.

When his father died in 1693, John Hawes, an only child, inherited all of his land and possessions.  At this time and perhaps earlier he occupied his father’s house.  In 1693 he was on a committee to choose a schoolmaster and in 1693 and 1696 he was appointed to settle and survey the boundary line between Yarmouth and Barnstable.   His tax in 1698 was 4 pounds, 9 shillings and 5 pence.  In 1694 the boundaries of about 16 acres or more, most of which he had owned for about 30 years, were fixed by John Thacher, Jeremiah HOWES  and John Miller.  This tract was granted to him by the town shortly after his marriage.

After the merger of Plymouth and Massachusetts Bay Colonies, John Hawes was chosen a representative in the Legislature at Boston in 1697 and 1698, but he may not have served the second term.

John performed many of the civic duties that his father had done: juryman, constable, receiver of excise, surveyor of highways, and so on. “In 1680 he was one of four men who for four or five pounds a whale (according to circumstances), to be paid in blubber or oil, were ‘to look out for and secure the town all such whales as by God’s providence shall be cast up in their several bounds,’ his territory being the western part of the town.”

He was appointed ensign of Yarmouth’s military Company and by 1700 was Captain. The town records show that he was a member of a committee to choose a schoolmaster in 1693. He was a representative in the Legislature at Boston in 1698.

On 31 Oct 1682, John was appointed an Ensign of the Yarmouth military company. About 1700 he became captain of the company and was called that thereafter. John was the Barnstable town treasurer from 1695 to 1698. He was chosen a representative in the Legislature at Boston in 1697 and 1698. He died in Barnstable 11 Nov 1701, from the effect of having his leg amputated. The record does not indicate whether or not it was because of an accident or disease.

Notes from John Howland of the Mayflower, Vol. 1:

John Hawes was a cutler. He served as a representative to the General Court for two years, starting in 1696 [Charles F. Swift, History of Old Yarmouth (1884), 247]. According to Col. John Gorham’s Wast Book,” Capt. John Hawes of Yarmouth, “having his Leg Cut of Dyed with it.” [Mayflower Descendant, 2:207] 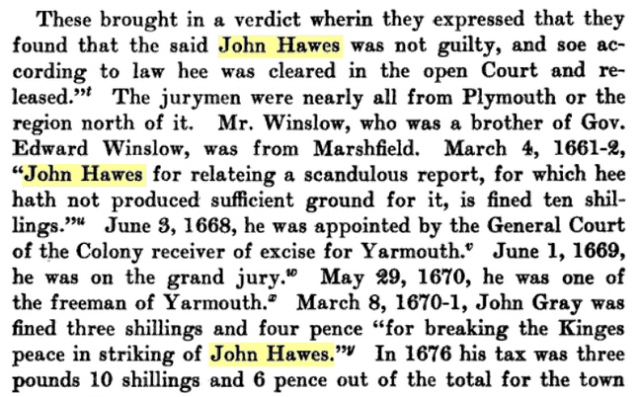 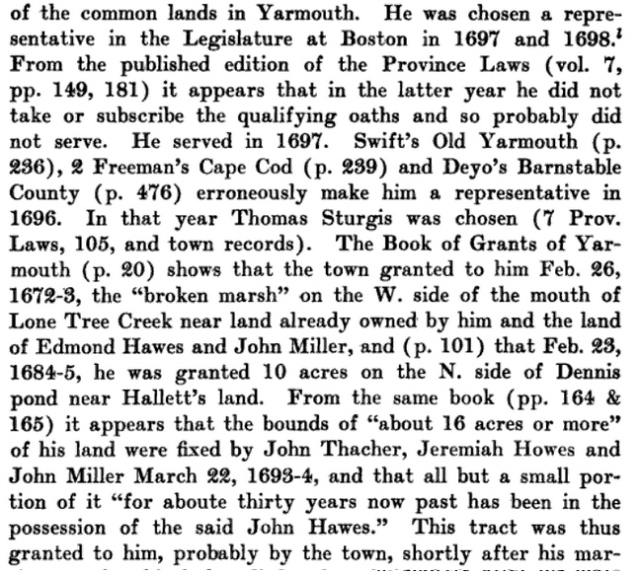 The will of John Hawes dated 15 Oct and proved 19 Nov 1701 reflected his large family.  He mentions his sons John, Joseph, Ebenezer, Isaac and Benjamin and his daughters Elizabeth Dogget, Mary Bacon, Desire and Experience Hawes.  His sons Joseph and Issaac were executors.  His ‘brothers” Major John Goreham and John Thacher Esqr. were overseers.  The inventory of his estate, after deducting debts, was 574 pounds and 11 pence, including 300 pounds for real estate, 41 pounds for “2 negro girls,” and 5 pounds for an “Indian boy.”  Sons Joseph and Isaac were appointed executors.

Witnesses were John, Peter and Josiah Thacher. The inventory, taken 25 Nov 25, 1701 amounted to L629-8-4.  A typical estate of the time of an independent farmer was about 150 pounds, so John was a comparatively rich man.  Major John GORHAM and John Thacher, Esq., were named overseers of the will.

His son Isaac received his dwelling house and barn along with one acre of land and he was directed to allow his unmarried daughters Desire and Experience freedom to dwell in the eastern most end of the house and have use of the chimney.  His son Ebenezer received 8 acres of land, 4 acres adjacent to John Hallet and Major Thacher.  The other four were to be in the land above the highway.  He also received part of his creek thatch land.  All the rest of his land and meadow was to be equally divided between his sons Joseph and Isaac.  He distributed his guns to sons Ebenezer and Isaac.  His gold ring and cane went to Joseph.  Mary Bacon received a small gold ring. The rest of his movable estate went to sons John and Benjamin and his four daughters. 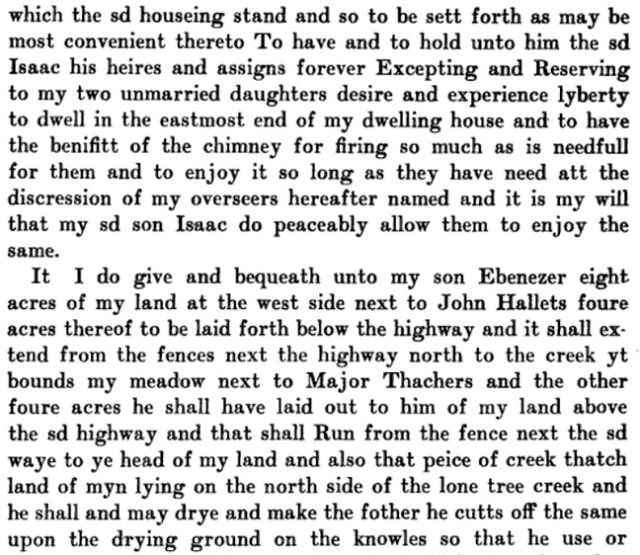 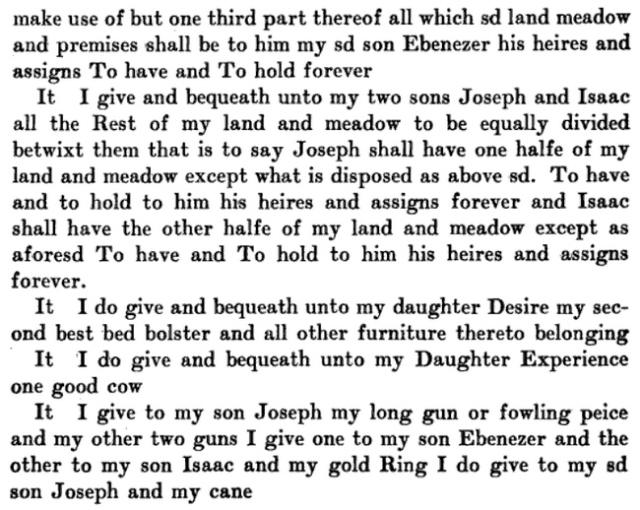 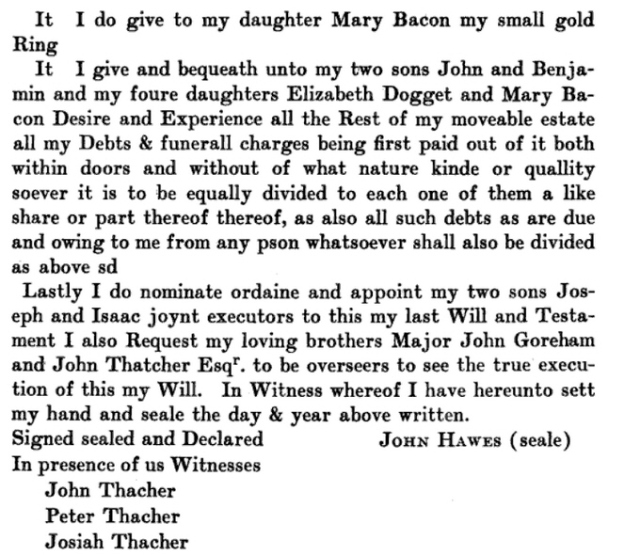 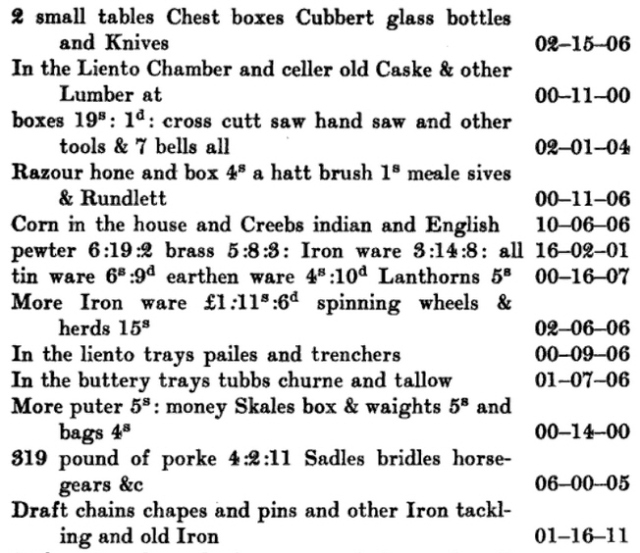 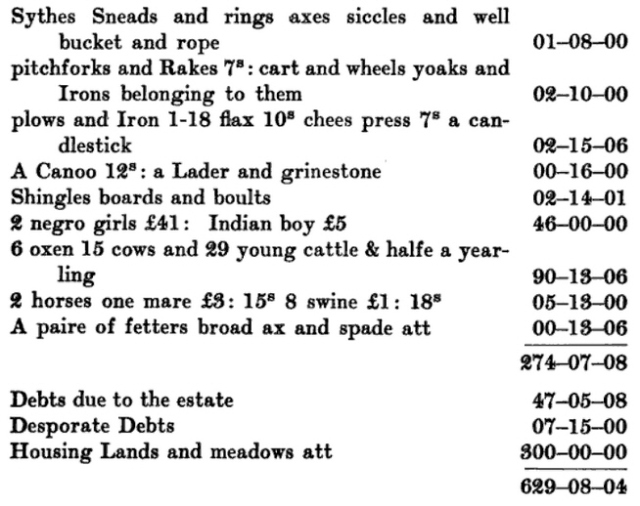 Children of Elizabeth and Thomas:

John Bacon was a lawyer.  He became a judge on the Court of Common Pleas and held other offices.

Edmund’s wife Eliony Lumber was born in 1670. There is no further information about her, though Lumber is a valid surname found in Somerset 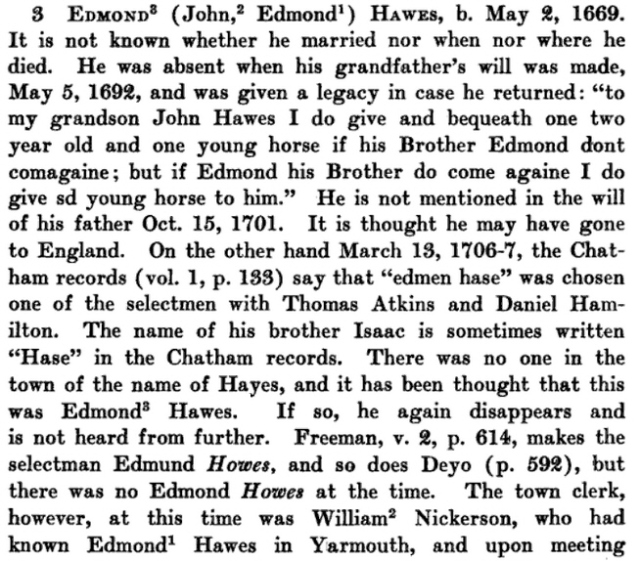 Children of John and Mary Edmund 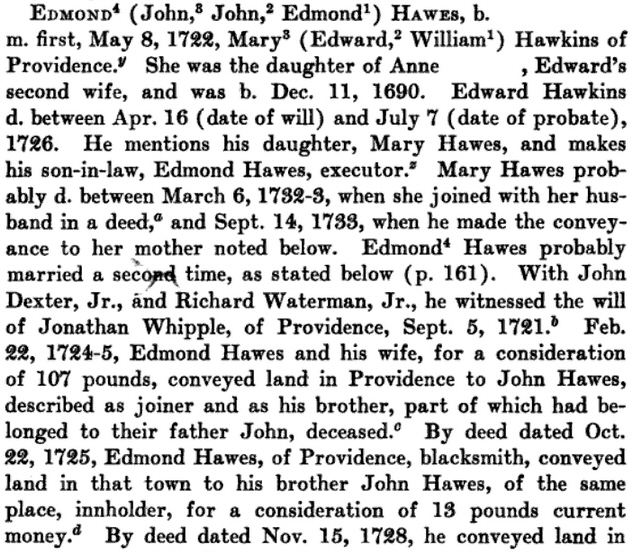 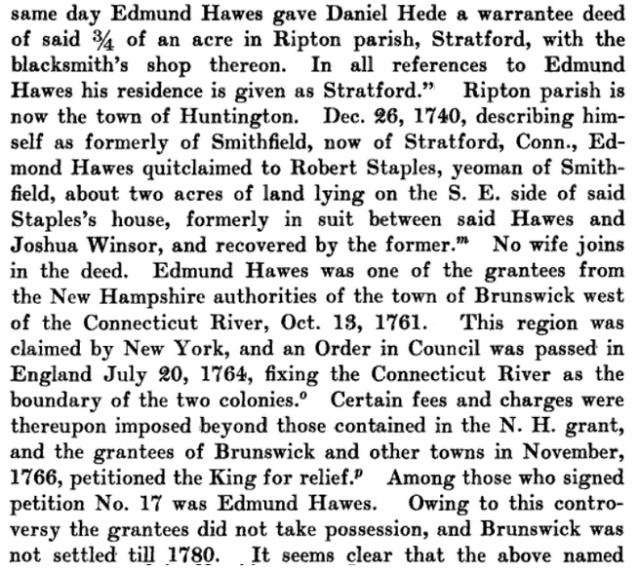 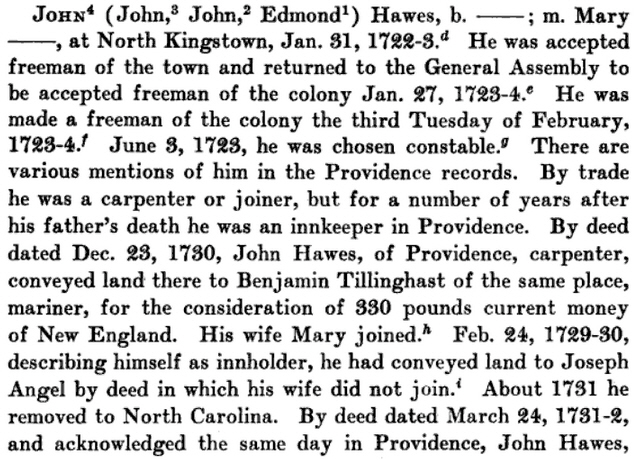 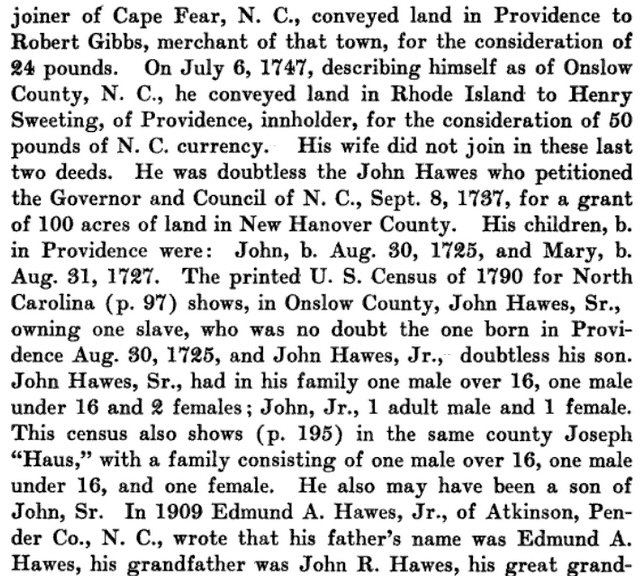 Isaac’s wife Bethia Howes was born in 1680 in Yarmouth, Mass. Her parents were our ancestors Jeremiah HOWES and Sarah PRENCE. . After Isaac died, she married after 11 Apr 1741 to John Smith and then 16 Nov 1743 in Harwich, Mass to Rev Joseph Lord of Chatham Bethia died 7 Jul 1748 in Chatham, Barnstable, Mass. 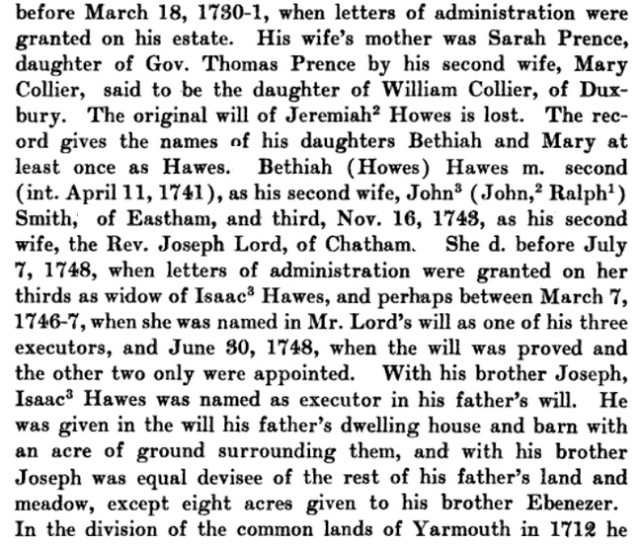 Children of Isaac and Bethia: 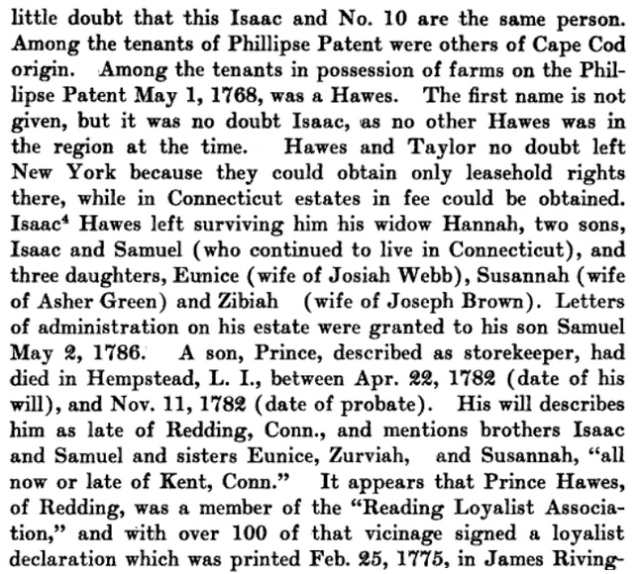 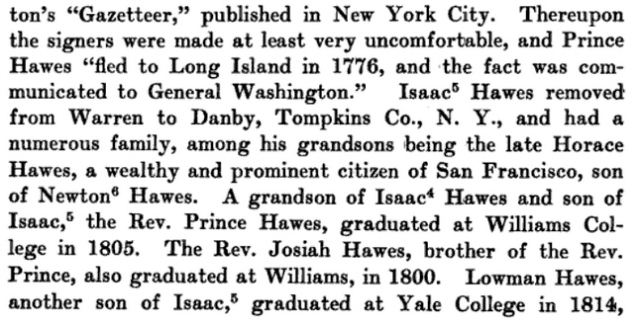 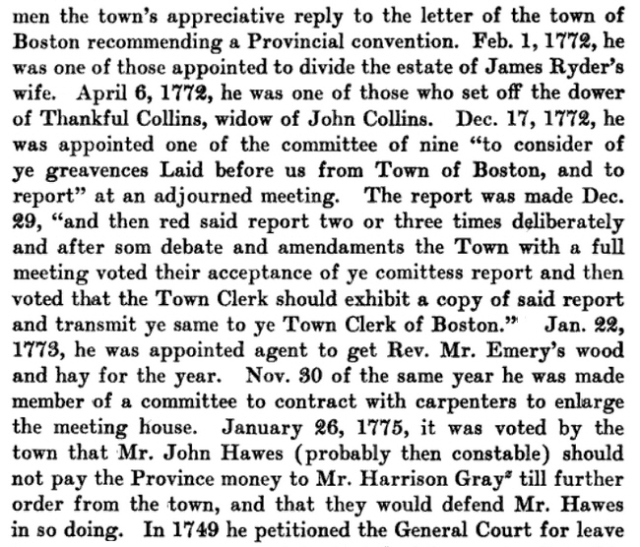 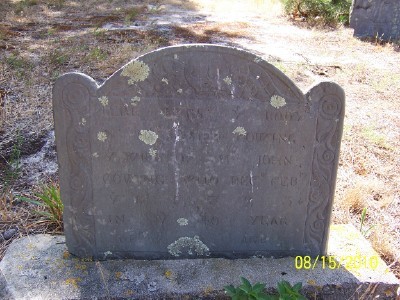 Children of Benjamin and Dorcas

vi.  Shubael Hawes b 22 Dec 1722 Edgartown, Dukes, Mass after the death of his father 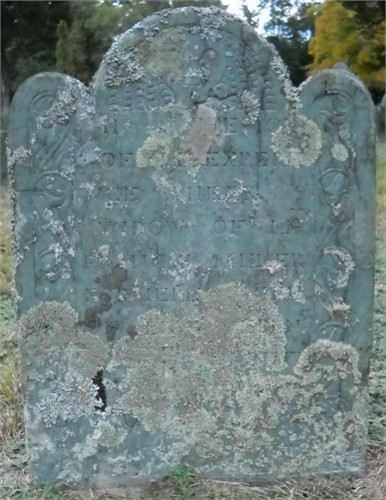 Edmond Hawes of Yarmouth, Massachusetts: an emigrant to America in 1635, his ancestors, including the allied families of Brome, Colles, Greswold, Porter, Rody, Shirley and Whitfield; and some of his descendants  1914