Children of  Nathaniel and Dorcas:

2 Mar 1651/52 –  “Nathaniel Basset and Joseph Prior, for disturbing the church of Duxburrou, on the Lord’s day were sentenced each of them to pay twenty shillings fine or the next towne meeting or training day both of them to bee bound unto a post for the space of two hours, in some public place, with a paper on their heads on which theire capital crime shall be written perspecusly, soe as may bee read.” Whether they paid the fines imposed or suffered the novel mode of punishment to which they were sentenced does not appear.

Nathaniel first settled in Marshfield, but removed to Yarmouth where he was an inhabitant in 1664, and perhaps earlier. He resided near the first meeting house and his descendents still enjoy his lands. Notwithstanding the trifling irregularity in his conduct when a young man at Duxbury, he was a very worth and respectable citizen, had a large family, ten of whom lived to mature age.

1656 Bradford Govr A Deed appointed to bee Recorded Know all men by these prsents that I Willam Bassett senir of Duxburrow now liveing Att Bridgwater for Divers Reasons and Considerations Doe freely Surrender and give up all my proper and whole Interest in my landes lying being and Scittuatt upon the south River with all the Emunities and privilidges belonging therunto both uplands and meddow lands unto my two sonnes there liveing viz Perigrine White and Nathaniell Bassett; I say I give all my proper Right & enterest unto them and to theire heires for ever with full power to establish theire Right and enterest according to court order under the prsent Govrment after the usuall order of confeirmacon of lands;

provided that both the aforsaid pties bee fully agreed upon the Devision of the lands which was to bee measured and ordered by mr Garrett of Scittuate whoe was appointed Survayor of the same; In Witnesse wherof I have sett toe my hand my owne proper Act and Deed June the 16th Anno: Dom: 1656 Witnesse heerof Willam Bassett; Willam Britt Willam Bassett senir: of Bridgwater Desired mee Richard Garrett to Survay his lott of upland and marsh att marshfeild *

The day of the month was omitted. 26 William Basett’s Deed by the south River and to make a Devision of the said upland and marsh unto his two sons viz Mr Perigrine White and Nathaniell Bassett which accordingly I have Done;

According to the Record wee began to measure att mr Starrs line by the marsh and from thence Did Run a west southwest line of 220 Rods for the length of the lott att a marked hee; and from thence wee Did Run a line north northwest 119 Rodds att a stake for the corner in the plaine and from thence wee Did Run a line east northeast 94 Rodds to the old Marked hee att the north side of Daniell Coles Iland which by meanes of the Swamp and mersh coveing Up into the upland the lott is Narrow att One end and Broad att the other and Mr Whites two fiftes of upland is bounded att Mr Whites south Range Runing from the point of marsh 106 Rodds 12 feet in Mr Starrs south Range att a marked hee and from thence it Runs 60 Rodds north northwest to a marked hee neare to Nathaniell Bassetts Barne;

out of which share of upland the said Mr White hath graunted to the said Nathaniell to have A triangle of upland by his Barne bounded from the corner of Mr Whites said lott to Run twenty three Rodds to a marked hee in the Range and from thence thirty seaven Rodds to a white oake hee by the cart way and from thence to Run twenty eight Rodds to the marked hee at the corner of Mr Whites lott Mr White is to Run from the said White oake hee twenty one Rodds on the south side of the cart way to an old ffence and by the fence to the marsh and by the marsh to Mr Starrs Range for his 2 fiftes of the upland; Mr Whites two fiftes of marsh is bounded to an old fence (aforsaid) by a swamp which fence Runes [p. 178] Runes into the mersh to a little Creeke and by that Creeke to Run Untill it comes to the great Creeke that Runes by the homacke and by the homacke Creeke Untill it comes to the River and by the River untill it comes to Mr Starrs Range and by the Range to the marked hee;

All the Rest of the marsh and upland that belonges to Willam Bassetts share is Nathaniell Bassetts 3 fiftes both of upland and Marsh; And the said Mr White and Nathaniell Bassett Doe likwise agree that convenient waies shalbee allowed to each other all which said prises wee Doe both of us Cordially and Really Agree unto Witnesse our hands this 17th of Aprill 1656 P White N; Bassett This is a trew Coppy taken from the original by mee Richard Garrett Records from the Burial Ground of the James Family 27 Nathaniell Bassetts 3 fiftes of upland and Marsh lyeth Together and is bounded att an old marked hee att the Swamp near the marsh by the brooke att the north side of Daniell Coles Iland and from thence It Runes 94 Rodds on a west southwest line to a stake in the plaine and from thence It Runes 119 Rodds on a south southeast line to a marked hee and from thence it Runes 123 Rodds on a East northeast line to a marked hee att the corner of Mr Whites lott in the south Range of Mr Starrs;

Nathaniel’s will, dated 10 Jan 1709/10, six days before his death, is a carefully drawn instrument, witnessed by Rev. Daniel Greenleaf, Experience Rider, and his nephew Col. William Basset, and furnishes much genealogical information. He names his nine children then living, says he is “aged and under much decay of body,” being then 82 years of age. To his son William he gave meadow and upland, which was John Joyce’s drying ground, bought of Mr. Thomas Wally, and meadow bought of Mr. Thornton.

Estate appraised at £228,11. Though William is first named in the will, he was probably the youngest son.

Nathaniel was one of the incorporators of the town of Mansfield in 1703,  a town in Tolland County.The population was 20,720 at the 2000 census.

Mansfield was incorporated in October 1702 from the Town of Windham, in Hartford County. When Windham County was formed on 12 May 1726, Mansfield then became part of that county. A century later, at a town meeting on 3 April 1826, selectmen voted to ask the General Assembly to annex Mansfield to Tolland County. That occurred the following year.

The town of Mansfield contains the community of Storrs, which is home to the main campus of the University of Connecticut.

Thomas and Mary were original settler in Truro, Mass, a town in Barnstable County, comprising two villages: Truro and North Truro. Located two hours outside Boston, it is a summer vacation community just south of the northern tip of Cape Cod, in an area known as the “Outer Cape”.  English colonists named it after Truro in Cornwall.  The historic Wampanoag Native American people called the area Pamet orPayomet. Their language was part of the large Algonquian family. This name was adopted for the Pamet River and the harbor area around the town center known as the Pamet Roads, The population of Truro was 2,087 at the 2000 census. Over half of the land area of the town is part of the Cape Cod National Seashore, established in 1961.

The English Pilgrims stopped in Truro and Provincetown in 1620 as their original choice for a landing before later deciding the area to be unsuitable. While there, they discovered fresh water and corn stored by the Kakopee. Historians debate the accuracy of the account about the latter discovery, but in popular lore it led to the place being called Corn Hill.

Truro was settled by English immigrant colonists in the 1690s as the northernmost portion of the town of Eastham. The town was officially separated and incorporated in 1709. Fishing, whaling and shipbuilding made up the town’s early industry. These industries had to shift to other locations as the harsh tides of the Lower Cape began decimating the town’s main port in the 1850s. In the late 19th and early 20th century, Cape Cod was a popular location for artists because of its light. 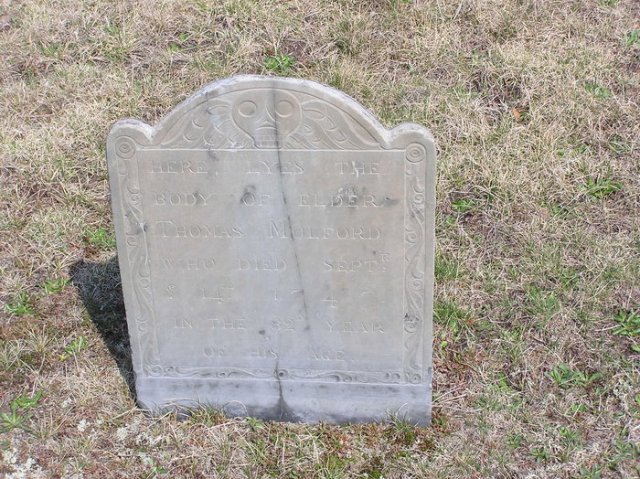 Inscription:
Here lyes the body of Elder Thomas Mulford who died Sept ye 14th 1747 in the 82d year of his age.

Nathan is the ancestor of the Chatham and Harwich families. He married March 7, 1709,
Mary, daughter of Thomas Crowell of Yarmouth, He died in 1728, leaving seven children. She died in 1742, and names in her will sons Nathan, Thomas, Nathaniel, who married Sarah Chase of Yarmouth, Aug. 23, 1729, Samuel, and daughters Mary Basset, Dorcas Nickerson and Hannah Co veil.

One of the oldest monuments in the Yarmouth graveyard is that of Dorcas Basset, who died June 9, 1707, aged 31. She was probably a daughter of Nathaniel.

Hannah’s husband Joseph Covell was born 1675 in Chathamn (Monomoit), Barnstable, Mass.  His parents were Nathaniel Covell and Sarah Nickerson.   He first married Lydia Steward, daughter of Ensign Hugh of Monomoit, about 1700.  She died not long after and he married second Hannah Bassett.   Joseph died in 1732 in Chatham, Barnstable, Mass.

Joseph’s farm was on the east side of Muddy Cove and extended east to the present road from the old cemeteries over to the lat Rufus Smith’s.  It was part of the old Wiliam Nickerson farm.  There is no record of his death or of his children and no settlement of his estate.  He was living as late at 1732, but does not appear on the tax list of 1755. 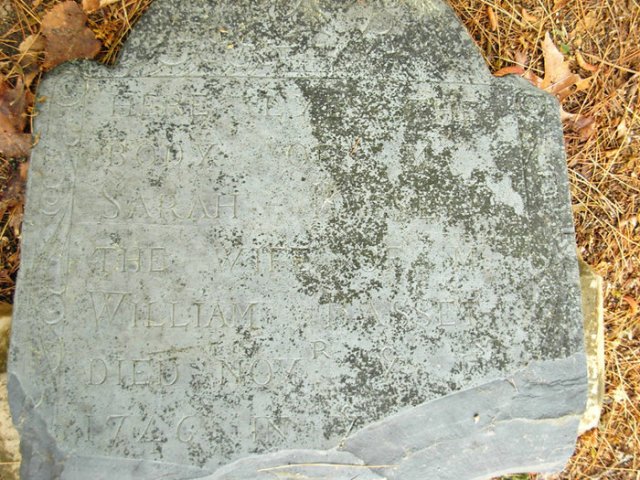 The findagrave researcher RColbath was just about to give up looking for Sarah’s headstone, when she spotted it laying on the ground, broken, near the edge of the cemetary. It’s difficult to read her last name, but the name Bassett is legible in her husband’s name.

Genealogical Notes of Barnstable Families by Amos Otis and revised by C.F.Swift published by The Patriot Press vol. I 1861

This entry was posted in 11th Generation, Line - Shaw, Twins and tagged Yarmouth. Bookmark the permalink.