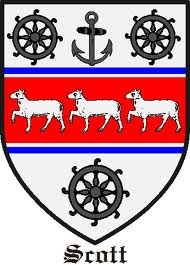 Martha Whatlock was born June 18, 1568 in Rattlesden, Suffolk, England.  Her parents were Thomas WHATLOCK and Joan [__?__] who had been baptized in Rattlesden 18 Jul 1568. Martha emigrated to New England with her daughter Ursula, son-in-law Richard Kimball and their seven children, son Thomas and his family, and Henry Kemball (probably Richard’s brother) and his family. They sailed aboard the Elizabeth, from Ipswich, England, on 30 Apr, 1634  The crossing took almost three months and they landed in Boston.

Martha Scott’s age is given on the list as sixty, although she was actually aged sixty-six. The Scotts and the Kimballs settled in Ipswich after a short stay in Watertown and there, presumablhy Martha Scott died, there being no record.

Children of Henry and Martha:

The will of Henry Scott was made 24 Sep 1623 and proved 10 Jan 1624.  It serves to establish the relationship between the families.

Henry Scott’s will was made “24 Sept. 1625 in the 21st year of James of England by Henry Scott of Rattlesden in the Co. of Suffolk and the diocese of Norwich.” It was proved in the court of the Arch deacon of Sudbury 10 January 1624-5. As Thomas Scott settled in Ipswich this may have had some influence in causing Richard’s removal from Watertown. Henry Scott was buried in Rattlesden 24 Dec. 1624. (Parish Register.)