John Kimball was born about 1621 in Rattlesden, Suffolk, England.   His parents were Richard KIMBALL and Ursula SCOTT. When John was 3 years old, he sailed for America on 30 Apr, 1634 on the ship Elizabeth of Ipwich with his parents, brothers and sisters, grandmother, uncle and cousins.  The crossing took almost three months and they landed in Bostson.  He first married Dollie Hoyt in 1653 in Ipswich, Mass.  After Dollie died, he married Mary BRADSTREET on 6 May 1655 in Ipswich Mass. He came over on the same ship with her and her father and mother.  Mary Bradstreet Kimball may have died in 1665 due to complications of childbirth when the twins were born. Some researchers believe John married Mary Jordan on Oct  8, 1666.  John died 6 May 1698 in Ipswich Mass. 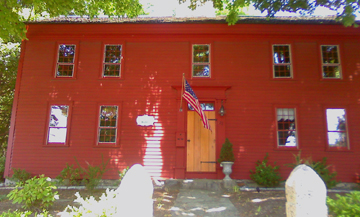 Mary Bradstreet was born in 1633 in  Ipswich, Suffolk, England.  She emigrated with her parents Humphrey BRADSTREET and Bridget HARRIS , brothers and sisters on the same voyage of the Elizabeth as the Kimball clan.   Mary died in 1665 in Ipswich Mass.

Children of John and Mary Bradstreet:

.
Children of John and Mary Jordan:

By trade John was a wheelwright, but by occupation, he seems, like his brothers, to have been an extensive farmer. He frequently bought and sold land, and there are a number of deeds on record in Salem bearing his name.

Joseph Fowler [John’s brother-in-law, his sister Martha Kimball’s husband], Thomas Cooke, Thomas Scott [a cousin], and two of ye sons of Richard Kimball [John and Thomas], for goeing into ye woods, shouting and singing, taking fire and liquors with them, all being at unseasonable time in ye night, occasioning yr. wives and some other to go out to them.

16 Oct 1665, he was appointed one of the executors of the will of Bridget Bradstreet. In her will she mentions her oldest daughter, Martha Kimball. (This is evidently a clerical error, Martha was the wife of William Beal). She givers to her “the ground she hath now in her possession, and my greine hood, peuter dish, and Mr. Morton’s Bocke and on sheet and on peliber (Pillowbear) To my daughter Mary Kemball my ould bible, my cloth waskate, my stamell peticote, on boulster and on palow, on peuter dish and on candlestick.”

On 8 Mar 1673, he united with the church by taking the covenant.

1680 –  A saltbox house is a Colonial style of architecture which originated in New England.  Saltboxes are frame houses with two stories in front and one in back, having a pitched roof with unequal sides, being short and high in front and long and low in back. The front of the house is flat and the rear roof line is steeply sloped. The sturdy central chimney is a simple but effective focal point. The simplicity and strength of this design, first seen around 1650, continues to make saltbox houses popular today. 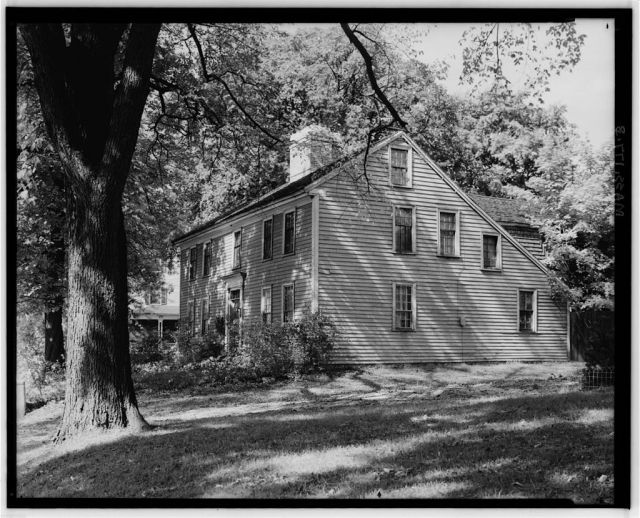 The John Kimball house  has an unusual 12 inch overhang and an early molded gutter. The interior represents 2 different periods. The great keeping room to the left has a chamfered summer beam with a small cupboard with wide-board tongue and groove sheathing, all in a rich, old tobacco brown color. The rooms on the right side of the house are Federal in appearance with painted woodwork, smaller fireplaces, wall-papered walls, and fine 18th century panelling.

One theory holds that the saltbox form was popularized by Queen Anne‘staxation of houses greater than one story. Since the rear of the roof descended to the height of a single-story building, the structure was exempt from the tax.  More likely, though, the saltbox shape evolved organically from the need for additional space for growing families; adding a lean-to was an economical way to enlarge the house. The earliest saltbox houses were created when a lean-to addition was added onto the rear of the original house extending the roof line sometimes to less than six feet from ground level. Old weathered clapboards are still in place on parts of the original rear exterior walls of some of the earliest New England saltbox houses.

In a deposition made in 1684, when John was 53 years old, he and his nephew, Philip Fowler, testify “that Mary wife of Thomas patch, Abigail Bosworth (probably wife of Haniniel Bosworth, who Richard, Sr., calls cousin in his will), and Elizabeth Spofford were daughters of Thomas Scott, Sr.”

His will is made 18 Mar 1697/98. In it he mentions his sons Richard, John and Mosis, to whom he gives “sixe shillings a peece in money, which is all i intend to for them having by deed of gift giuene before what I them intended out of my estat.” He mentions his six “dafters Mary, Sarah, hannah, Rebekah Elizabeth and Abigail.” His “sunes Beniaman and Jospeph kimbal” have all the personal property divided between them, except one steer that he gives “to my sun beiamin, and my best cubbard I gue toe my sun beniamin’s wife: in consideration of what they have dune or may doe for em in my eage and weaknes.” His real estate had all been given away before this time, and his personal property which was estimated at £131.9s.11d. consisted mainly of “Quick Stock” as follows: “Six Oxen £24. Eight cows £26. 13 young cattle £18.10s. 29 shepp £6. 12 swine £5.”

Mary’s husband Deacon Thomas Knowlton was born 1622 in Canterbury, Kent, England.  His parents were William KNOWLTON and Ann Elizabeth SMITH. He first married Susannah [__?__]. They left a beautiful manor hall in Kent and sailed on the ship that Captain Knowlton owned to New England. They settled in Ipswich. Thomas had been married before to Susannah who died on November 20, 1680. Thomas died 23 Apr 1692 in Ipswich, Mass.

Thomas had a share in Plum Island. He was a cordwainer and shoemaker, a deacon of the old First Church of Ipswich. Since he had no children of his own, he sent his brother William’s boys to school and cared for a daughter until she married. as well as taking in Nathaniel, his nephew, to live with him.  His will of 5 Dec 1688 settles the matter of his childlessness since all legatees are stated to be children of his brother.

Children of Rebecca and Thomas:

Elizabeth and Richard were twins.

Richard and Elizabeth were twins.

Richard’s wife Lydia Wells was born 5 Apr 1668 in Ipswich. Her parents were Nathaniel Wells and Lydia Thurley. Nathaniel was the son of Thomas Wells (son of our ancestor Thomas WELLS and Abigail Warner. (daughter of our ancestor William WARNER).

19 Jun 1697 – His father deeded him the house and land on which he was living and other property.

2 Nov 1700 – He was chosen to be on a a committee to meet with the Indians concerning land titles.

John’s wife Sarah Goodhue was born 1672 in Ipswich, Essex, Mass. She was Susannah’s sister and her parents were Joseph Goodhue and Sarah Whipple. Sarah died 1726 in Preston, New London, CT.

After the Common lands were distributed, and the Common fence ceased to be, John Kimball acquired possession of a lot, beyond the Smith Dow location. On May 25, 1752, he deeded to his son, John, “the southeast half of my lot of land, on which my said son John’s house and barn now stand, together with the orchard & buildings on the premises, bounded east on the lane leading to the Parsonage Pasture, south on said Parsonage Pasture (101: 141).” The house still stands, and near the house on the east, a lane leads over the railroad track to the Parsonage Pasture, which is still enjoyed by the old First Parish. The property was inherited by Charles Lord and by Eben Kimball his son-in-law.

Benjamin’s married his cousin, Mary Kimball. on July 16, 1694. Mary was born on 15 Jan 1670/71 in Topsfield, Essex County, Massachusetts. She was the daughter of John and Sarah Kimball.  John was the son of Richard Kimball, Jr.

On March 28, 1696 his father sold him a house and orchard and an acre of land in Ipswich when he married Susannah.

On his marriage Apr 29, 1696 his father deeded to him the southern end of the farm, bounding on the commons in Ipswich, and he farmed there.

The Essex County Court at Newberry records for September 26, 1699 cite

Joseph Kimball, with Sarah Warner, whom he carried to Salem with the child within 24 hours after birth, which child died an hour and half after arrival in Salem. Bond of 50 pounds, sureties, Richard Kimball and Philemon Warner.

This entry was posted in 11th Generation, Be Fruitful and Multiply, Historical Site, Immigrant - England, Line - Miller and tagged Ipswich - Pioneer, The Elizabeth 1634. Bookmark the permalink.