Herring River - On the 3rd of June, 1700, the Committee of the town of Yarmouth bounded the land of John Chase at the Herring River, and in their record they say that it was “for many years past granted unto John Chase.”

Elizabeth Baker was born 6 Apr 1649 in Yarmouth, Mass.  Her parents were Francis BAKER and Isabel Twining.  Elizabeth died 16 May 1706 in Swansea, Mass. Two of their children,  Sarah and William, are our ancestors.

Children of John and Elizabeth:

John Chase was a Quaker.

“The same time was given to John Chase the nooks and slips on the west side of Herring River, from William Griffith his meadow downward toward the sea, unless we could elswhere accommode him better.” On the 3rd of June, 1700, the Committee of the town of Yarmouth bounded the land of John Chase at the Herring River, and in their record they say that it was “for many years past granted unto John Chase.”

John Chase’s name was on a List of the Soldiers of Yarmouth that were pressed into the country’s service, and that went to Mount Hope under Capt. John GORHAM against the Indians in 1675, and took their first march upon the 24th June, ’75. The sum of his wages was £1 04 00.

John Berry and John Chase were among others in an expedition, June, 1675, to repel an expected attack on Swansey. He received, 1713, twenty-two shares in common lands (p. 139 or 130, Yar. Rec). To him and his six sons is due the credit of prolonging the name on Cape Cod. All the rest of his brothers and uncles lived to the west away from the Cape. Up to 1800, there was hardly a Chase on Cape Cod who could not trace his descent from this John.

“John Chase of full age Testifyeth and Saith I do know upon my certain knowledge That Teague Jones lived in a Field where Nathaniel Baker now lives, about eight or nine and forty years ago, and he then possessed both Land and meadow on the westward Side of the Bass River, and the Stage Island, which was so Called then, and is called by the Same name now, he Improved by mowing, and was a liver there before the Records was burned at Old Mr. Howes, and in the Eastward End of the Sd Island there was a piece of Thatch Grew, from which grew this marsh, which is now in Controversy. Apr. 8,1715 Then John Chase in Open Court did affirm that as he was in the presence of God this Evidence was truth, etc.” (Barn. Court Records, 1737.)

Thomas was a deacon and  had 11 children, 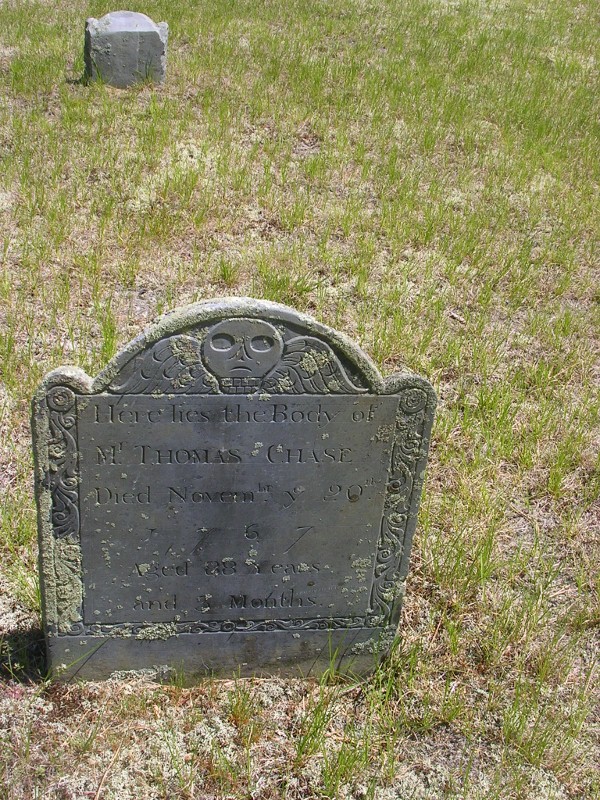 History of old Yarmouth. Comprising the present towns of Yarmouth and Dennis. From the settlement to the division in 1794 with the history of both towns to these times (1884) Author: Swift, Charles Francis