David O’Kelly was born about 1636 in Gallagh, County Galway, Ireland.  His  parents were Teige O’KILLIA and Ann DALY. Details regarding David’s voyage from Ireland to the colonies are not known, however the English subjugation of Ireland had taken place between 1641-1654 and many Irishmen had been captured in the process and sent to the colonies to be indentured servants.  The earliest know record of David in the colonies appears in Plymouth Colony Records, Oct 4, 1655 when he is called “David Ogillior an Irishman”. In that record David was implicated in charges of fornication with his future wife Jane POWELL, of Sandwich, a Welsh servant of one William Swift. David is shown as the servant of Edward STURGIS [another of our ancestors] He married Jane POWELL in 1670 in Yarmouth, Mass.  The children’s birth order seems to be inferred from the will. David died in 1697 in Yarmouth, Mass. 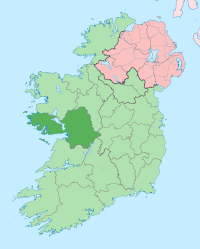 “haueing been presented for fornication, whoe, being examined, saith that it was committed with one David Ogillior [O’Kelley, spelling was in its infancy in those days], an Irish man, seruant to Edward STURGIS ; shee saith shee was alured thervnto by him goeing for water one euening, hopeing to haue married him, beeing shee was in a sadd and miserable condition by hard seruice, wanting clothes and liuing discontentedly; and expressing great sorrow for her euell, shee was cleared for the present, and ordered to goe home againe. “

Children of David and Jane

No one knows with certainty how David O’Killia/O’Kelley (the surname Kelley was spelled fourteen different ways in the Yarmouth Vital Records) ended up in Plymouth Colony in the 1600s. Most of the colonists were of English descent, so where’d the Irish guy come from? It was so unusual for someone to be from Ireland that he was sometimes called “David the Irishman” in records.

From The American ancestors and descendants of Seth Kelly, 1762-1850, of Blackstone, Mass.’

David, according to legend, came to America with his parents who died during the crossing. The captain robbed him, and left him (only 10 or 12 years old) in Yarmouth about 1637.

According to the references in New England Irish Pioneers, family tradition says:When a mere boy in Ireland, David OKelley and other youths were captured and placed on board a vessel for transportation to Virginia, but David was put ashore on Cape Cod by the heartless captain. The date is unknown but circumstances indicate it was about the year 1652. He was first indentured as a servant to John Darby of Yarmouth…The unexpired indenture seems to have been transferred to Edward STURGIS…That period of service expired in or before 1657…because in that year David OKillia, Irishman, was recorded in a list of Yarmouth men who tooke the oath of fidelitie, and in the same year he was admitted inhabitant at Yarmouth, with the right to vote in town affairs…

It is possible David was a prisoner of war by the English and sold in America as an indentured servant. England’s subjugation of Ireland, which occurred 1641-1654, caused hardships among the Irish and many prisoners of war, orphans and the destitute were seized by English authorities and sold as indentured servants. One 1661 entry in Plymouth Colony Records mentions William Hifreny, an Irishman and servant who had been “stolen from his own country.”

There are approximately 50,000 Kellys and O’Kellys in Ireland today. It is the second most common Irish surname, not far behind Murphy in numerical strength. This name presents a remarkable example of the extent to which the prefixes O and Mac, so widely dropped during the period of Gaelic submergence, have been resumed. In the year 1890 there were 1,242 births registered as Kelly (distributed all over the country), while only nine were registered as O’Kelly. Today the proportion has risen from one in 130 to approximately one in twenty. The second President of Ireland (1945–1959). Sean T. O’Kelly, was a case in point.

The Kelley family of Cape Cod is descended from David O’Killea, who established a homestead at Kelly’s Bay in South Dennis, Massachusetts, during the second half of the seventeenth century.

4 Oct 1655 – The earliest know record of David in the colonies appears in Plymouth Colony Records when he is called “David Ogillior an Irishman”. In that record David was implicated in charges of fornication with his future wife Jane Powell, of Sandwich, a Welsh servant of one William Swift. David is shown as the servant of Edward Sturgis.

“And att this Court, Jane Powell, servant to William Swift, of Sandwidge, appeered, haveing been psented for fornication, whoe, being examined, saith that it was committed with one David Ogillior, an Irish man, servant to Edward Sturgis; shee saith shee was alured therunto by him goeing for water one evening, hoping to have married him, beeing shee was in a sadd and miserable condition by hard service, wanting clothes and living discontentedly; and expressing great sorrow for her evell, shee was cleared for the psent, and ordered to goe home againe.”

Burt Derick wrote in Gaelic Love on Cape Cod: David, the Irishman, and Jane, the Welsh Maid, Dennis Historical Society Newsletter, Feb/March 2008, that David and Jane’s story is one of loneliness and love. The Separatists realized they needed to bring in willing workers, which was easy given the strife in Great Britain from wars, ravages of plague and religious persecution. Nearly all were young and unmarried, at the bottom of the social class.

David and Jane were poor bondservants, in their teens, forced to endure great hardship. Jane was likely originally from Wales. It is possible, but unlikely, that she is related to the Powells of Boston as William Swift Sr. lived there. William Swift Jr. resided on the present Standish Road in North Sagamore, now the town of Bourne, and owned Jane’s indenture. She would have had a busy time caring for Swift’s 10 children. The distance between Swift and Sturgis’ homes is 24 miles, quite a distance in those days. Perhaps they met on the same ship from England to America.

David and Jane were poor, lonely, scared, moving to an uncertain future and they were Gaelic, sharing a common language others on the ship may not have had. They would have been immediately separated and endured a hard life, as Jane’s plea in court shows. Many of the colonists were religious fanatics, ruling with an iron hand, punishing people for minor infractions. Somehow, in a time when roads were less than cartways and transportation was slow, David found Jane. Perhaps he had an errand to do for his master, attending the only gristmill in the area to get the corn ground to flour. It is unlikely it was a chance encounter–not a single encounter in the woods of Sagamore, but one of many. There was certainly a background relationship between these people that resulted in the encounter for which they were charged. The fornication charge likely means she was pregnant, rather than caught in the act.

Despite Jane’s guilt, the magistrates could not bring themselves to levy the typical punishment of public whipping and they sent her home. They also didn’t charge David with seducing the girl. They leave the two to work out the problem. It’s also remarkable the Clerk took time to record so many details of Jane’s predicament

After securing freedom for both of them, David did the honorable thing and married Jane and they moved to a 100 acre farm that was eventually named Kelley’s Point, at the head of Bass River on the banks of what is today called Kelley’s Bay. The area is now called Mayfair in current day South Dennis, Massachusetts.
–

1657 – David O’Kelly, Irishman included in a list of men taking the oath of fidelity in Yarmouth

On 10 February, 1696/7, “David Ocillia of yarmouth” made his will,
and signed it by a mark. Bequests were as follows:
To “my Son Jeremiah Okillia” 2 shillings.
To “my Son Joseph Ocillia” 2 shillings.
To “my Son David Okillia” 2 shillings.
To “my Grand Child John Okillia” 2 shillings
To “my Daughter Elisabeth Okillia my little chest and my great Iron kittle after my wifes Decease”
To “my Daughter Sarah Okillia my Box and my too lesser Iron kittils affter my wifs Decease”
To “my Son Benjamin Okillia my gun and my sourd and my Great Chest”
To “my loving wife Jane and to my Son Benjamin Okillia my hors and my two oxen & my cow and heifer and all my Sheep and Swine equally between them”
To “my loving wife Jane my Bed and Beding and Bedstead and Curtins and all the moveables that are not above mentioned”
To “my son Benjamin Okillia my now Dwelling house and all my lands and meadows…After my wifs decease or after her marriage if that my wife marry againe, all plow Irons chains and all Iron Tools that are left”
“My loving wife Jane Okillia to be my Sole Executrix”
“I the Sd David Okillia Senr” signed the will 10 February, 1696/7. The witnesses were Thomas FOLLAND, William BAKER, Sr. (by mark), and Isaac Perse, by a mark.
On 19 July, 1697 the three witnesses made oath to the will, “the two former according to the coustom and the latter William Baker as he was in the presence of God”, and the will was probated, and administration granted to Jane Okillia, the widow, on 28 July, 1697.
On 16 July, 1697, the inventory was taken by Thomas Folland and Benjamin Mathews.
The real estate was: “house lands and meadows” £1696, 2, 10. Will, proved 1697, 7, 19. Ex., wife Jane.
Witnesses, Thomas Holland, Wm, BAKER,, Hoar Perse.
To son Jeremiah, 2 shillings,
and like amount to sons Joseph and David, and grandson John.
To daughter Elizabeth, a little chest and great iron kettle, after wife’s decease.
To daughter Sarah, a box and 2 lesser iron kettles, after decease of wife.
To son Benjamin, gun, sword and great chest.
To wife Jane and son Benjamin, horse, 2 oxen, cow, heifer, sheep and swine, equally between them. To wife Jane, bed, bedding and all movables not above mentioned.
To son Benjamin the dwelling house, lands and meadows, after wife’s decease or marriage.

He signed his will by mark, witnessed by Thomas Folland, William BAKER, Sen (his mark) and Isaac Perse (his mark):

In the 1960s the old cellar and a pit, as well as a few pear trees, remained at the site of David’s homestead.

The first records of Friends’ (Quaker) meetings held in Yarmouth begin in 1681. The simple meeting place in what is now Dennis was built about 1714 near the Kelley homestead, on land owned by David. It stood near the old cemetery, which has been marked with a plaque by the Dennis Historical Commission. The building was used until 1809 when a new meeting house was built across Bass River in South Yarmouth.

The O’Kelley family was the third Quaker family in the area, joining John WING and Henry DILLINGHAM.   Apparently Quakers around Cape Cod  weren’t persecuted as much as they were in other parts of Massachusetts.

John’s wife Bashrua (Bersua, Bethia or Bathsheba) Lewis was born Oct 1667 in Barnstable, Barnstable, Mass. Her parents were George Lewis and Mary Lombard. John died in 1693 after only 3 years of marriage and in 1699, she married again to Thomas Baker (b. 1654 in Yarmouth – d. 1703 in Yarmouth). Thomas’ parents were Francis BAKER and Isabel TWINING.

Benjamin as the youngest son inherited the dwelling house, lands and meadows after mother’s decease, real estate inventoried at £1696, 2, 10, while the older sons had to make due with 2 shillings apiece. I guess that was Benjamin’s reward for taking care of his mother during her widowhood.

Benjamin and Mary had a son Reuben. He served in Queen Anne’s War on the sloop Coronation and deserted his wife and son and later married Hopestill Smith. He may have died at Swansea, MA.