Rene Rezeau was born c. 1645  in  St. Martin, Isle of Re, Maritime, France.  His parents were Jacques REZEAU and Elizabeth NEAU.  He lived on the Isle of Re, situated almost opposite the City of La Rochelle.  Rene married Anne COURSIER 22 Jun 1670 in Ste. Marie De Re, Charente Maritime, France.  The population was almost all Protestant, many fishermen had come here from neighboring provinces, planning to migrate to the New World. Included amoung these Huguenots were Rene Rezeau and his wife Anne Coursier. They fled the island in 1685, eventually, they arrived in New York City. Here they joined the French Church, finally, they moved permanetly in Staten Island. Rene died 2 Oct 1720 in  Fish Kill, Staten Island, Richmond, New York.

Ann Coursier was born c. 1649 in France.  Her parents were Jehan COURSIER and Anne PERROTEAU Her parents both died in 1663 when Ann was only 14 and her sister Marie 3 years old.  Both girls found their way to America. Ann died 18 Feb 1719 in Elizabethtown, Union, NJ.

Sainte Marie de Re - occupies the south-east of Ile de Re. This rural village on the coast is classified as protected wilderness resort, since on 25/02/2009 and Green Holiday Station since 2002. Between land and sea, it is the first agricultural town of Ile de Re. The vine is a big place. Its beaches and wild coastline attracts surfers.

Children of Rene and Ann

1695 May 05; To Daniel Jouet and Marie Coursier; Anne; Witnessed by Rene Rezeau and Anne Reseau

The Huguenot congregation was formally established in 1628 as L’Église française à la Nouvelle-Amsterdam. This parish continues today as L’Eglise du Saint-Esprit, part of the Episcopal (Anglican) communion still welcoming Francophone New Yorkers from all over the world. Services are still conducted in French for a Francophone parish community, and members of the Huguenot Society of America. There was Huguenot settlement on the south shore of Staten Island, New York in 1692. The present-day neighborhood of Huguenot was named for those early settlers.

Baptism- Today Sunday 26th of February 1698/99 after the prayer of the eving for baptism in this church by Mr Peiret minister Madeline daughter of Jean Melot and Marie Bellamain born the 14th of the month presented for Holy pabtism by Rene Rezeau and Madelain Genou godfather and godmother.”

The lack of further references could indicate that the girl did not survive much longer than her baptism. The mother apparently did not, as Marie Bellemain Mellott died by the end of the year.

As to logistics, the information from the Mellott-Eastman family tree suggests that the birth of the girl and death of the mother took place in Piscataway Township in Middlesex County, New Jersey. The distance between Piscataway and Staten Island, where the baptism took place is about 19 miles by boat, a 4-5 hour rowing trip in a period rowboat (3-4 knots speed). As an aside, Perth Amboy is about halfway between the two. (Her parents had moved from Staten Island to Perth Amboy at some point, and then by the time of her mother’s death to Piscataway.) 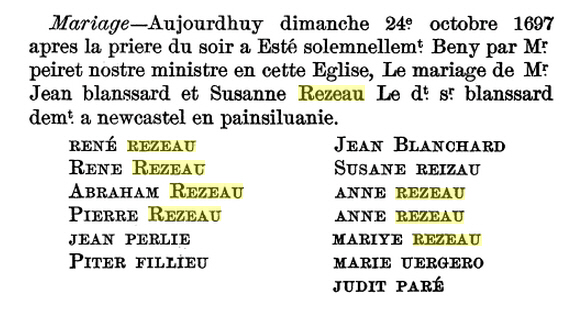 Marie and her brother Pierre witnessed the 19 Sep 1703 baptism of their nephew Jean.  To Jean Perlier and Anne Rezeau; Jean; Witnessed by Pierre Rezeau and Marie Rezeau .

Marie married Jean PERLIER II’s half brother Pierre Traverrier on 20 Dec 1743 – Somerset, New Jersey.  Pierre was born  6 Jan 1689; Pierre was apprenticed to Peter Chaigneau, cooper, by his mother, who at that time was referred to as a widow, October 21, 1701.   Marie and Pierre had only one child, a daughter, Mary Traverrier.

Registers of the Births, Marriages, and Deaths of the Eglise Francoise a LA Nouvelle York: French Church of New York, from 1688 to 1804