The Battle of Bloody Brook was fought on Sep 12, 1675 between English colonial militia from the Massachusetts Bay Colony and a band of Indians led by the Nipmuc sachem Muttawmp. The Indians ambushed colonists escorting a train of wagons carrying the harvest from Deerfield to Hadley during King Philip’s War. They killed at least 40 militia men and 17 teamsters out of a company that included 79 militia. 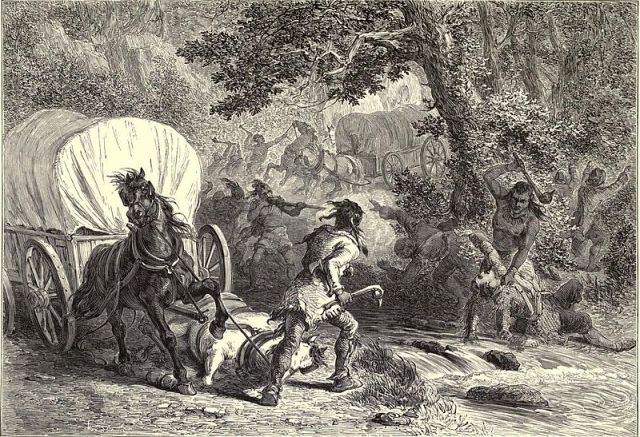 Leonard HARRIMAN’s son John (16 May 1650 Rowley, Mass ) was killed at the Battle of Bloody Brook with Captain Lathrop. At a given signal, hundreds of warriors, who were lying concealed all around the spot, opened fire on the convoy. Chaos followed, bullets and arrows flew from every direction. Captain Lathrop immediately fell. Of the 80 soldiers, only 7 or 8 escaped.

Henry BENNETT’s son John (b. 1655 Ipswich, Mass) was killed at the Battle of Bloody Brook.  At the Battle of Bloody Brook on September, 18, 1675, the dispossessed Indians destroyed a small force under the command of Captain Thomas Lathrop before being driven off by reinforcements.  Originally intended to be a uneventful delivery of wheat by oxcarts to Hadley, the men apparently took few precautions and were confident that their numbers belied attack.  It would have disastrous consequences.  Colonial casualties numbered about sixty. In retaliation, at dawn on May 19, 1676, Captain William Turner led an army of settlers in a surprise attack on Peskeompskut, in present-day Montague, then a traditional native gathering place. They killed 200 natives, mostly women and children. When the men of the tribe returned, they routed Turner, who died of a mortal wound at Green River.

Edmund GREENLEAF’s grandson Stephen (b. 1652) was killed at the Battle of Bloody Brook.

Richard KIMBALL’s son-in-law Robert Dutch (b. 1623 – d. 1686)was a soldier in King Philip’s War of 1675 with Captain Moseley. In the Bloody Brook battle, he was wounded, beaten, stripped, and left for dead, but he recovered.

“As Capt Mosely came upon the Indians in the Morning, he found them stripping the Slain, amongst whom was one Robert Dutch of Ipswich having been sorely wounded by a bullet that rased to his Skull and then mauled by the Indian Hatchets, was left for dead by the Salvages, and stript by them of all but his skin…”.

Richard KIMBALL’s  grandson  Caleb, b. 1647; was in Captain Lothrop’s company at Bloody Brook, in King Philip’s war, and was killed 12 Sep 1675.  Estate Of Caleb Kimball.
Administration upon the estate of Caleb Kemball, who was slain in the war, was granted 21 : 10 : 1675, to Henry and Richard Kemball, the latter making oath to the inventory which was allowed.
—Salem Quarterly Court Records, vol. 5, leaf 92.

Thomas Kimball had wages due him from the county at the time of his death, as stated in his inventory, that it is possible that he had been engaged in the war with the Indians, and was probably with his nephew, Caleb Kimball, at the time the latter was killed at Bloody Brook. 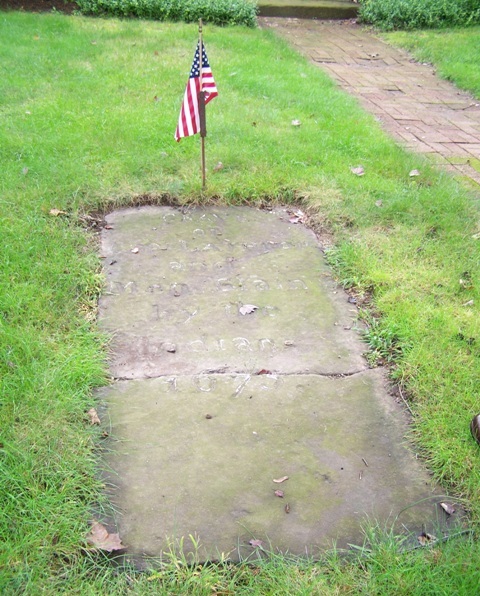 The Battle of Bloody Brook took place during King Philip’s War, a conflict between certain Native American tribes and colonists in New England in 1675 and 1676. The conflict is named for King Philip, also called Metacomet, chief of the Wampanoag. He was one of several Native American leaders who led warriors from various tribes. The war was touched off by the killing of a John Sassamon, a liaision between the colonists and the Wampanoag, but it followed decades of expanding colonial settlements and challenges by displaced Native Americans.

In June 1675 a gruesome cycle began. Colonists and Native Americans burned one another’s settlements. Loyalties of tribes and individual Native Americans shifted, and mistrust fed on itself. In the Massachusetts Bay Colony, settlers grew so suspicious of Native Americans that they exiled some who still claimed to be their friends. Many colonists stopped believing the sincerity of the “praying Indians,” who had converted to Christianity. (In Connecticut, colonists managed to keep somewhat better alliances with Native American tribes, and they enjoyed more safety.)

In the summer, Native Americans who opposed the expansion of colonial settlements tasted victory in attacks on villages in Massachusetts. Assaults drove settlers to abandon their homes in September. They gathered in the blockhouse at Deerfield. Lacking food for winter, the settlers dispatched some eighteen teamsters, under the guard of Captain Thomas Lothrop and about seventy newly recruited soldiers, to retrieve a gathered harvest of grain from their fields.

The men loaded the harvest without incident and possibly began to feel too safe. On September 18, 1675, they attempted to haul the grain back to Deerfield. After traveling some distance, the convoy stopped to rest. The inexperienced soldiers laid their firearms in the carts of grain and picked some wild grapes nearby to eat.

Unbeknown to Lothrop, his soldiers, and the teamsters, a much larger force of hostile Native Americans had been shadowing them. While the colonial troops rested, the Native Americans attacked. As many as ninety colonial soldiers and teamsters were killed. Many, but not all, of their names have been preserved.

Most of the dead were young men, and many were unmarried and childless. Among the teamsters, a father and three of his sons perished. Captain Lothrop, about 65 years old, had no biological children, although probate documents by his widow, Bethiah Lothrop, name an “adopted daughter Sarah Gott.”

Captain Moseley and a troop of 60 soldiers who were in the area heard the sounds of the ambush and hurried to the scene. For approximately 6 hours, a battle was fought with neither side gaining the upper hand. Each soldier fought in the Amerindian style: conceal yourself, select a target and shoot. Finally a troop of 100 Connecticut soldiers with a band of Mohegans arrived. Realizing they could not win now, the warriors disappeared into the forest. The surviving soldiers straggled back to Deerfield for the night. According to D. E. Leach in his book, Flintlock and Tomahawk, p. 88, “Moseley retired to Deerfield that night, and there he and his grim-faced men were taunted from a safe distance by a group of the enemy warriors who gleefully displayed articles of clothing taken from the English dead.” The surviving soldiers returned the next day to bury the dead in a mass grave. The sluggish little brook was re-named Bloody Brook. Deerfield was abandoned shortly afterward and later the village was destroyed by King Philip’s warriors..

The battle took place near Deerfield Village on the banks of Muddy Brook, afterward called Bloody Brook. The dead soldiers and teamsters were buried in a mass grave nearby. The bloodshed led the remaining settlers swiftly to abandon Deerfield. For years after the war’s end, settlers’ attempts to reclaim the land provoked attacks by Native Americans. The settlers gradually prevailed.

The mass grave was marked in 1838 with a flagstone bearing Lothrop’s name and an inscription about the event; the site was excavated beforehand to confirm the presence of remains. A taller monument to the tragedy was later erected nearby. The grave, monument, and site of battle are located in South Deerfield, Franklin County, western Massachusetts.

According to Eben Putnam, Lothrop’s men were “almost entirely from the county of Essex,” which borders the Atlantic coast. This is why fishermen and ship’s carpenters are found among the dead of this battle to defend farm settlements along the western frontier. The teamsters, on the other hand, mainly lived in the newly settled area in and around Deerfield.

SURVIVORS. Most of the colonial soldiers at Bloody Brook died and were buried in the mass grave. The kist of survivors include: Henry Bodwell, Robert Dutch, John Stebbins, John Toppan, and Thomas Very.

This entry was posted in History, Violent Death. Bookmark the permalink.

7 Responses to Battle of Bloody Brook