William DIGBY  was born in 1495 in Ketteby Luffenham, Rutland, England   [Ab Ketterby is about 25 miles NW of Luffenham, I’m not sure which is meant by the above combination.  His parents were Sir John DIGBY and Katherine GRIFFIN.  He married  Rose PRESTWICH 1518 in England.  After Rose died, he married 1522 in Eye Kettleby, Leicestershire, England to Ellen Roper.   William died 1558.

Children of William and Rose

William’s life wasn’t as dramatic as our other Digbys, so I’m including some interesting wall paintings from the family church St Andrews Stoke Dry, Rutlandshire, 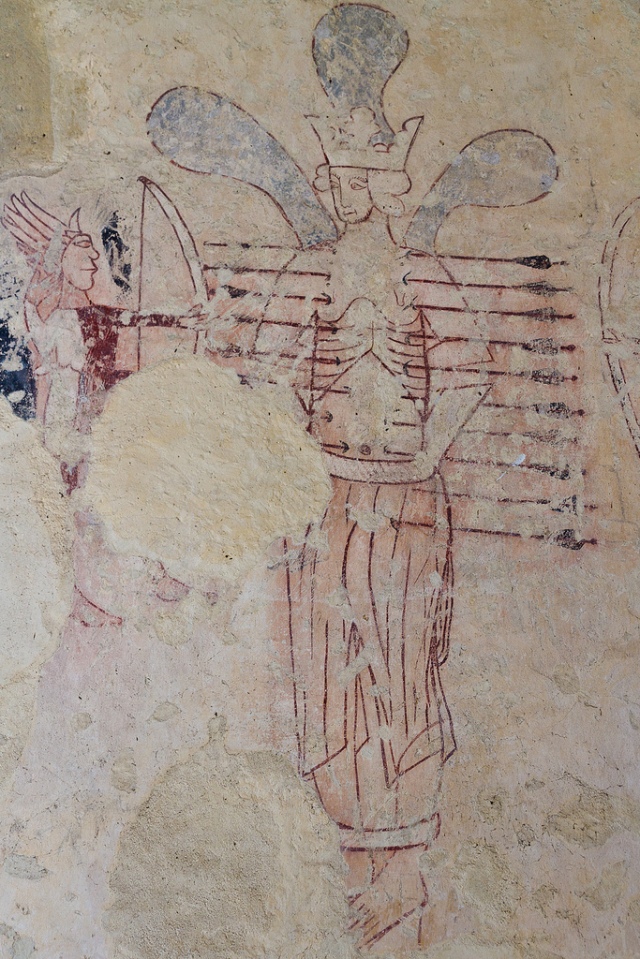 St Edmund (died 20 Nov 869) was a king of East Anglia, an Anglo-Saxon kingdom which today includes the English counties of Norfolk and Suffolk and perhaps the eastern part of the Fens. Almost nothing is known of Edmund: contemporary evidence for him is largely confined to the Anglo-Saxon Chronicle and his coinage.

The Anglo-Saxon Chronicle, which generally described few matters relating to the East Angles and their rulers, is the only source for a description of the events for the year 869 that led to the defeat of Edmund’s army at the hands of the Danes. It relates that “Her rad se here ofer Mierce innan East Engle and wiñt setl namon. æt Đeodforda. And þy wint’ Eadmund cying him wiþ feaht. and þa Deniscan sige naman þone cyning ofslogon. and þæt lond all ge eodon.” – ‘here the army rode across Mercia into East Anglia, and took winter-quarters at Thetford; and that winter King Edmund fought against them, and the Danish took the victory, and killed the king and conquered all that land’.  By tradition the leaders who slew the king were Hingwar and his brother Hubba.

This entry was posted in Line - Miner, Storied and tagged 16th Generation. Bookmark the permalink.