Item it is agreed that during the life of Katherine Digby late the wife of John Bellers Esq’ John Villiers shall pay yearly to Dame Marine Greene in recompence for Kettleby & Sistonby viij  xij  ix  [£8 7s 9d]  to be made sure thereof.

Item Jasper Roskin shall in likewise pay to the same Dame Marine in like recompence yearely to the sayd Dame Marme during the life of the sajd Digby xivj* viij** [14s 8d] and the sayd Jasper other xxvj” vij** [25s 7d].

Item it is agreed that in as goodly hast as can be thought by the aduice of good substantiall the states of the land according to the partitions be ingrossed togeather with the state that shalbe made to the sayd Katherine Digby &c, that is to say to each of the part to them assigned in taile & fault of issue the remainder to be either of the copartners of the Moietie of the same entayle

The Griffin family’s roots can be traced back  to Henry I King of France  (See his page).

Demise by Sanche, late the wife of John Strelley, esquire, to Simon Digby, esquire, of the manor of Trowell and all lands therein during the nonage of John Strelley, son and heir to her siad husband, ‘the remainder thereof after the full age of the said John the son to the same John Strelley the son for term of forty years; which manor was assigned to her as parcel of her dower by Sir Henry Willughby, Sir Gervas Clyfton, knights, and other cofeoffees of her husband according to the award of Sir Thomas Lovell: [Notts. Date: 4 May, 18 Henry VII [1503]

John Markham, knight, and Anne, his wife, daughter of John Strelley, esquire, deceased, and of Sanche, his wife and executrix. v. Simon and Roland, sons and executors of John Digby, knight, second husband of the said Sanche.: Legacy of the said John Strelley, who died possessed of the manors of Strelley, Radcliffe-on-Trent, Chilwell, Wheatley, Oxton, Shipley, and North and South Leverton. Date: 1538-1544 .

Children of  John and Katherine:

Sir John sheriff of Rutlandshire in 1485; also member of Parliament,. Sir John was knighted at the Battle of Bosworth Field fighting for Henry VII [where he defeated Richard III].  John’s father and five uncles also took part in the Battle of Bosworth.  He might have been related to Sir Simon Digby about whom Giles St. Aubyn in his book, “The Year of Three Kings, 1483″ says he joined Henry in his march through Wales to Bosworth.

The Battle of Bosworth Field (or the Battle of Bosworth) was the penultimate battle of the Wars of the Roses, the civil war between theHouse of Lancaster and the House of York that raged across England in the latter half of the 15th century. Fought on 22 August 1485, the battle was won by the Lancastrians. Their leader Henry Tudor, Earl of Richmond, became the first English monarch of the Tudor dynasty by his victory and subsequent marriage to a Yorkist princess. His opponent Richard III, the last king of the House of York, was killed in the battle. Historians consider Bosworth Field to mark the end of the Plantagenet dynasty, making it one of the defining moments of English history. 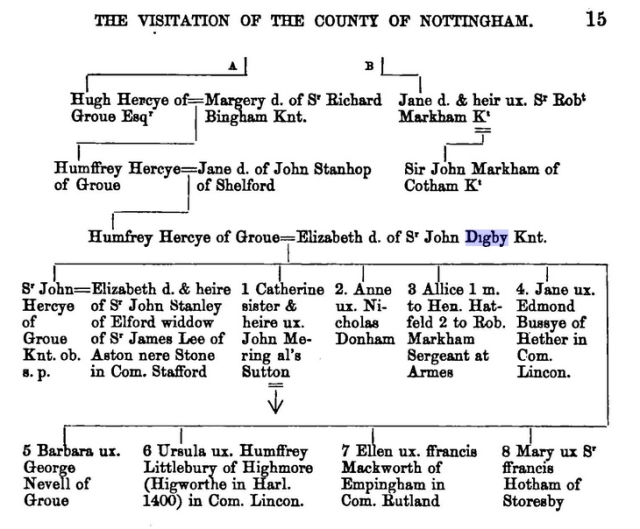 Humphrey Hercye Family Tree Source:The visitations of the county of Nottingham in the years 1569 and 1614

Anne’s husband  Sir William Skeffington (c. 1465-1535), lord deputy of Ireland, belonged to a Leicestershire family and was sheriff of Leicestershire and Warwickshire under Henry VII. He was master of the ordnance and a a knight of the shire (Member of Parliament) for Leicestershire from 1529–1535 in the reign of Henry VIII., and in 1529 was appointed deputy in Ireland for Henry’s son, the duke of Richmond, the nominal lord lieutenant of that country.

Sir William was born in Skeffington, Leicestershire. His brother John was the patriarch of the Massareene family. He was appointed High Sheriff of Leicestershire and Warwickshire for 1508, 1515 and 1521 in the reign of Henry VII and was knighted by that king for his services. In 1523, he received from Henry VIII property near Tunbridge that had belonged to the executed traitor Henry Stafford, 2nd Duke of Buckingham.

He was appointed in 1529 deputy in Ireland to Henry’s son, the duke of Richmond, the nominal lord lieutenant of that country.  He crossed over in August 1529, but his power was so circumscribed by instructions from Henry that the head of the Fitzgeralds, Gerald, 9th earl of Kildare,, and not Skeffington, was the real governor of Ireland. This state of affairs lasted for three years and then in 1532 the deputy was recalled.

In 1534, Kildare being in prison in England and his son Thomas, afterwards the 10th earl, being in revolt, Skeffington was again appointed deputy , at approximately 70 years of age. After some delay he landed at Dublin in October 1534 and marched at once to relieve Drogheda, but further progress in the work of crushing the rebellion was seriously delayed by his illness. However, in the spring of 1535 he was again in the field. He took Maynooth Castle, killing and executing the entire garrison. The heavy artillery used by him on this occasion earning for him his surname of “The Gunner”; he forced some of Kildare’s allies to make peace and captured Dungarvan.

William died in Dublin on the 31st of December 1535, and was buried in St. Patrick’s Cathedral. He was succeeded by his eldest son Thomas.

He was last Roman Catholic to hold the office either of Lord Deputy or Lord Lieutenant, with the exception of the Duke of Tyrconnel in 1687-1689 and Lord Fitzalan in 1921-1922.

He first married Anne’s great aunt Margaret, daughter of Everard “Greenleaf” DIGBY William Skeffington was so fond of Digbys, that when she died, he married her great niece Anna, the daughter of Everard’s grandson John Digby of Kettleby.

William and Margaret had four sons, including Sir Leonard Skeffington, who would hold the post of Lieutenant of the Tower of London. Sir Leonard is credited with having invented the “Scavenger’s Daughter“, which was a torture device used in the Tower during Henry VIII’s reign Following Margaret’s death, William Skeffington married secondly, Anne Digby, a daughter of Sir John Digby of Kettleby and his wife, Katherine Giffin. This marriage produced two further sons and three daughters.

The will (at Nat. Archives) of John Digby d. 1533 of Eye Kettleby asks for masses for the souls of John Bellers and Parnell Ashby (as well as others known to be his close kin) John Bellars was the first husband of the Katherine Griffin who was the first wife of John Digby. John Digby and Katherine Griffin’s daughter Alice married George Ashby so presumably Parnell was a daughter of George and Alice.  Parnell is a female first name – Petronilla in Latin.

This entry was posted in Line - Miner, Storied and tagged 17th Generation. Bookmark the permalink.