Temperance Gorham was born 5 May 1646 in Marshfield, Plymouth, Mass. Her parents were John GORHAM and Desire HOWLAND.    After Edward died, she married Thomas Baxter 27 Jan 1678/79, Barnstable, Mass. Temperance died 12 Mar 1715 Yarmouth, Barnstable, Mass.  in the 67th year of her age.  Her descendants are numerous, and among them are many men of literary and political distinction.  All of the name of Baxter in Barnstable County are her descendants. 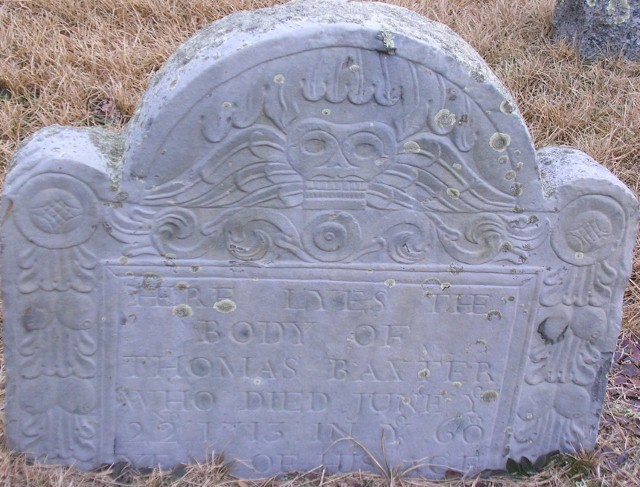 Mr. Thomas Baxter is called in the records “a bricklayer.”  He was a soldier in Capt. Gorham’s company in the first expedition, where he lost the use of one of his hands by a wound.  He resided after his marriage at South Sea, now West Yarmouth, and then recently settled.  Unable to work at his trade, he devoted himself to study, and was much employed in public business.  In partnership with his brother-in-law Shubael Gorham, and his sons, he built the fulling mill on the western Swan Pond river, and the grist mill known as Baxter’s Mill, though some poetical genius of the day, gave the while credit to his sons.

“The Baxter boys, they built a mill,
Sometimes it went, sometimes stood still;
And when it went, it made no noise,
Because ’twas built by Baxter’s boys.”

Children of  Edward and Temperance:

Edward Sturgis resided near the first meeting-house in Yarmouth.  He left a large estate, which was divided among his children when they became of legal age.

Edward Sturgis Jr. worked with his father in importing liquor for the inn that his father kept. On November 12, 1678 at about 36 yrs of age, he made a noncupative (verbal) will which was written down on November 15, 1678 and witnessed by his mother, Elizabeth Sturgis, John Sunderland and Joseph Gorham and was probated on June 3, 1679. The will bequeathed 1/3 to the widow and the remaining 2/3 to be divided equally among his children, except that son, Joseph Sturgis, was to have 20 pounds more than the rest, and daughter, Desire Sturgis was to have his silver tankard. He died with an estate of 900 pounds which was a large estate for that time. His real estate of 100 acres was partitioned for the four sons, Joseph, Edward, James and Samuel. Their uncle, Governor Hinckley, supervised the administration of his estate

An invoice of liquors brought into town during the year 1663, will give some idea of the extent of the drinking habits of the times :

” A Note of the particulars of the Liquors that have been brought into the town of Yarmouth, since May 1663, and envoiced.

Messrs. Thacher and Dennis were also inspectors of anchors, lead, powder and shot, as well as liquors. At the next term of the court [1663/64], it was voted that, “in regard of much abuse of liquors in the town of Yarmouth, this court doth call in any license formerly given to Edward Sturgis, Sr., and do require that he forbear to draw wines or liquors for the future, without further orders from the court.”

Liquor legislation was a disturbing element in Yarmouth. The court in 1663 fined Edward Sturgis for bringing liquor into town without giving seasonable notice to those appointed to invoice it, and in the 1664 Elisha Hedge, for breaking bulk before giving notice what liquors he had brought into town, was adjudged to have forfeited 16 gallons thereof

Children of Joseph and Hope: 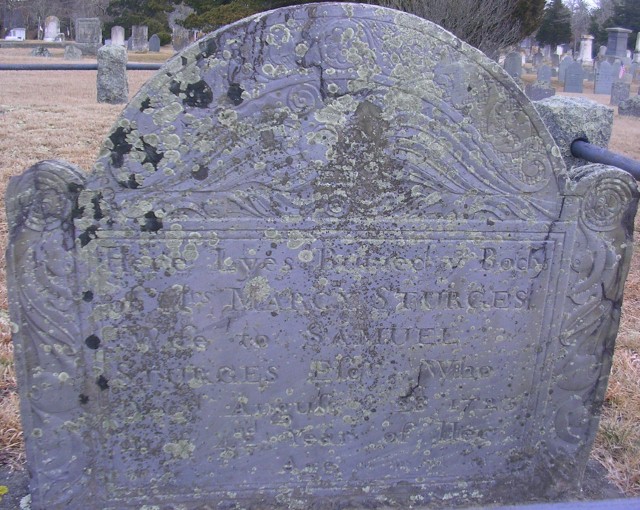 This Lamson stone has a unique wide tympanum border and a border visible below the skull which extends around four sides of the inscription area.

Children of Thankful and Peter:

This entry was posted in 11th Generation, Line - Shaw and tagged Yarmouth. Bookmark the permalink.