William BLAIR Sr. ( – 1822) was Alex’s 5th Great Grandfather; one of  64 in this generation and the founder of our Blair line in North America.

We don’t know much about William Blair Sr.   His son William told people he was from Armagh – no town, no parish, no townland – there are over 500 parishes in Armagh so it’s hard to find the correct one.  He may have married Mary DOWNING. William may have died in 1822 in Richhill Parish, County Armagh, Ireland.

Children of  William and Mary:

Willliam may have lived in the Richhill/Kilmore Parish area of Armagh, Ireland. Sher Leetooze, Bowmanville, Ontario, Canada wrote in 2008

I believe I have found [our Blairs in] the Richhill/Kilmore Parish area of Armagh, but can’t be sure. Is there anyone on the list who has access to Mullaghbrack BMDs? And/or the townlands in the same area? Looking for the birth of William Blair
1780-81, possibly son of William and Mary Blair. This William married late in life – Sept 1822 to Mary HUESTON. Possibly at
or near Richhill, though if they married in her family parish I haven’t a clue where that would have been – I can’t find her anywhere. Hopefully, the Banns were read in both parishes and I can find her through his parish (if it is indeed Richhill/ Kilmore).

Now, as long as the list members don’t mind – here is what I know…  William BLAIR, born 1780, Armagh, Ireland. married Mary HUESTON, Sept. 1822
William BLAIR was a Quaker, a weaver and was left handed (this bit shows  up in every other generation)

This is what I thought I knew…..
Assumed William and Mary BLAIR, died at Richhill Parish 1822 to be his parents – right place, right age….. because he was both a weaver and a Quaker it was a nice neat package to place him at Richhill where the Richardson’s had built a Quaker meeting house in about 1803 and where they owned many townlands and rented cottages to weavers, and had a linen agent who collected from them. On the 1796 Spinning Wheel Premium List, William  and Mary Sr. are listed as weavers at Mullabrack, just the right age, then  by the time the Richardson’s had built their meeting house these same two  people were a few miles away at Richhill and are buried there.

What I now know….
There was a naming pattern in those days for children:
> 1st son – named for father’s father….so, their first son was born in 1823 and named John – that puts the above information to rest, doesn’t it!!!
> 2nd son – named for mother’s father … according to records, the second son was William, born 1825
> 3rd son named for father – well, the father was William, so the second son of our records must be, in actual fact, the third son – I need to find a death in 1824 or 1825 of a child.
> 4th son is named for eldest brother of father – this fits – the next son is indeed Thomas, and William’s elder brother Thomas did indeed emigrate to Quebec as well. Thomas’s eldest son was called John, just like William’s,  so I guess I have to look for a John?!
> Also, on the Tithe Applottments for 1825, there is a William Blair at three townlands in Keady Parish – Lagan, Iskemeadow and Tullynamaloge. I knew there were BLAIRs at Keady for a long time, but could never find a weaver William among them – there was a shoemaker, William, however, and I assumed
it to be a distant relative. Unfortunately, the Tithe Applottment index does not give an occupation.
> As far as being a Quaker, the Lisburn Meeting says he never paid subscription – that he likely attended meetings in sympathy for the Friends. He and his wife were Methodists once they arrived in Quebec, Canada.
> None of the records here in Canada say what part of Armagh they came from, simply Armagh, or just Ireland.
> Also, John Hayes, on his website, has transcribed the 1848-63 Griffith’s Valuation and there is a James BLAIR at both Iskemeadow and Tullynamaloge townlands – could be a brother who never came to Canada.

Does anyone know if the 1825 has occupation, or any other information? Would it be worthwhile to spend the $6 to order the film into my local LDS FHC??

Any suggestions as to how I should proceed would be welcomed

Thomas was born in Ireland.  He married Grace Trainer.   A Thomas Blair witnessed the baptism of William’s son Thomas 10 Jun 1832 in the same Presbyterian Church of Hemmingford where Thomas’ son John was married the year before.

Thomas Blair worked on the fortifications at Ile Aux Noix. These fortifications were repaired sometime between 1814 and 1817.  Île aux Noix is an island on the Richelieu River in Quebec, close to Lake Champlain. The island is the site of Fort Lennox National Historic Site.  Île aux Noix is a 210 acres island in the Richelieu River. The French and Indian War caused the French to build a fort in 1759, named fort de l’Isle aux Noix, to slow the British advance on Montreal, but were forced to surrender it in 1760. In 1775, the island was taken by American forces, and used as a base by the American generals Philip Schuyler and Richard Montgomery for attacks on Montreal and Quebec. The Americans used the island again in 1776 during their retreat from Canada. Their army spent 10 days on the island: more than 900 American soldiers died and were buried in two mass graves on Isle aux Noix. The British then built a new fort in 1778 and named it the fort of Isle aux Noix. During the War of 1812, the British used the island to supply their operations against the American fleet on Lake Champlain. The present Fort Lennox was built from 1819 to 1829, when the old fortifications were completely demolished. It remained a military post until 1870 and is now a popular tourist location.

By 1819 Thomas had remarried and was on his land in Hinchinbrook Township, Huntingdon County, Quebec. So he came sometime between 1814 and 1817 it seems. Thomas Blair was interred  Hillside Cemetery 19 Nov 1841.

They had at least three children John H., Mary Ann and William.

1.1.   John H. Blair was born 10 Oct 1811 in Co. Armagh, Ireland.  His parents were Thomas and Grace Blair.   He married Samantha Lucretia Grimshaw 8 Sep 1831 when he was just 19 at the  Presbyterian Church in the Township of Hemmingford   Witnesses were John Blair and his sister Mary Ann Blair.    John and Samantha Lucretia had ten children.  William Blair [probably his brother] was a witness to the baptism of their son Thomas on 9 May 1844.   The 1851 census has John H living with Grace, b. Ireland, widowed, age 72 (mother); and Mary, b. Canada, age 22 (in addition to his 21 yr old daughter, Mary ) John died 1 Nov 1884 of heart disease at Hemmingford, Huntingdon County, Quebec and is buried at Hillside Cemetery, Rennies, Huntingdon Co., Quebec. 11-01-1884.   A native of town and country, Armagh Ireland. John Blair, Interred Hillside Cemetery 2 Nov 1884 age 75 years. 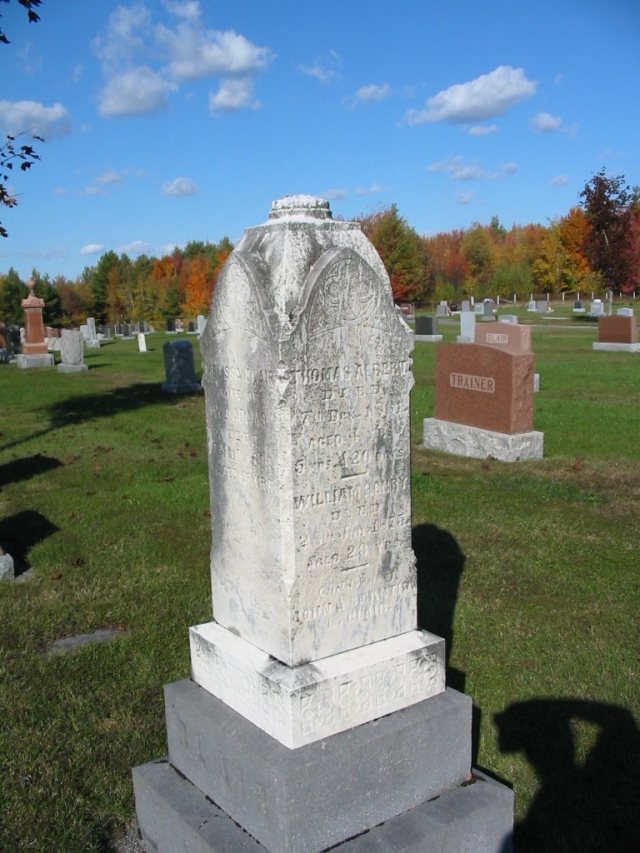 Gleaner  02-16-1864 William Adams, married Melissa Blair, at the residence of the bride’s father, in Hinchinbrook, by the Rev. A Wallace

1.2  Mary Ann Blair was born in 1812 in Ireland.  Her parents were Thomas and Grace Blair.  She married William Grimshaw in 1830 in Quebec, Canada when she was just 18.

Mary Ann married William Grimshaw – who was likely related to Thomas’ brother William Blair through marriage, as William had married Betsey Grimshaw in about 1803 in upper New York State. Members of both Blair and Grimshaw families kept moving back and forth across the border between Quebec and New York all down through the years that followed. It seems our William Blair (the one I am looking for) went home to Ireland. I am wondering if he had already been on the land at an early date, then gave it to his brother when he went back to Ireland? The lot that Thomas Blair settled on with his young family was one lot over from William Blair’s father-in-law! I think William’s wife died and he went back to Ireland. He did eventually return with a new wife and five children, but not until the 1830’s.

The first Grimshaws to settle on Wolfe Island, Ontario, which is located near Kingston at the head of the St. Lawrence River at Lake Ontario were William and Mary Ann (Blair) Grimshaw, who acquired several parcels of land in the western half of the island. William and MaryAnn were the progenitors of one of the most important Grimshaw lines in North America.

Mary Ann and William had twelve children.   William’s son James married one of these twelve – Samantha Ann Grimshaw. and went to live near the Grimshaw clan on Wolfe Island, an island located at the entrance to the Saint Lawrence River in Lake Ontario near Kingston, Ontario.  Mary Anne died  6 Nov 1883 in Wolfe Island, Frontenac, Ontario, Canada.

Children of William and Mary Ann: 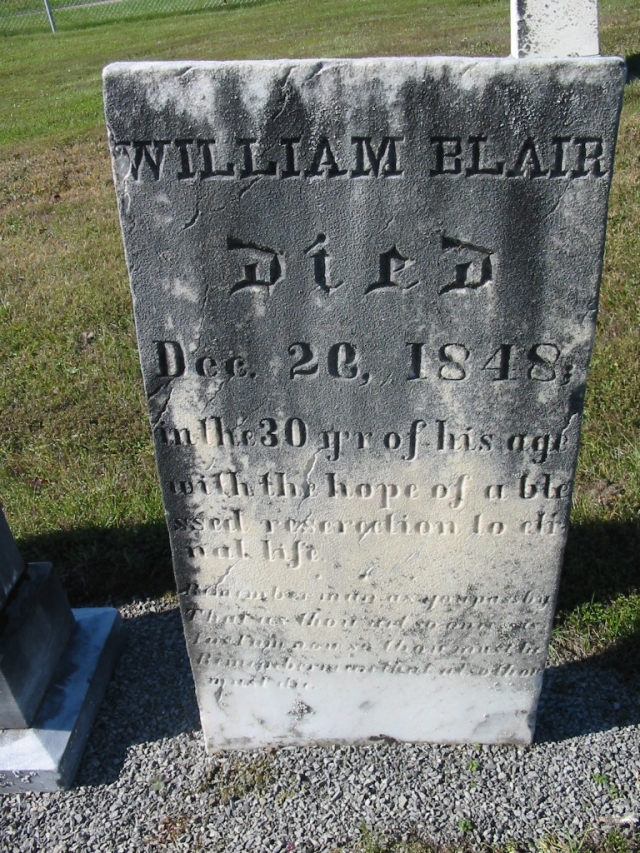 Elizabeth Cain, widow of the late William Blair, and daughter of Isaac Cain, and Mary Greenfield, his wife, died in Franklin, Quebec and was interred Hillside Cemetery Dec. 04, 1899 age 77 years 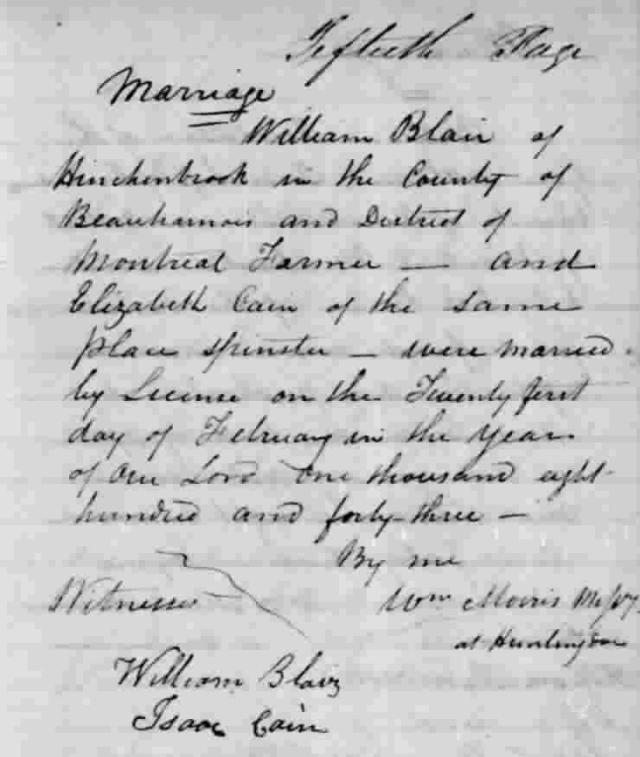 Children of William and Elizabeth:

11-14-1880 The wife of William Isaac Blair, at Hinchinbrook, near Rockburn, a daughter. 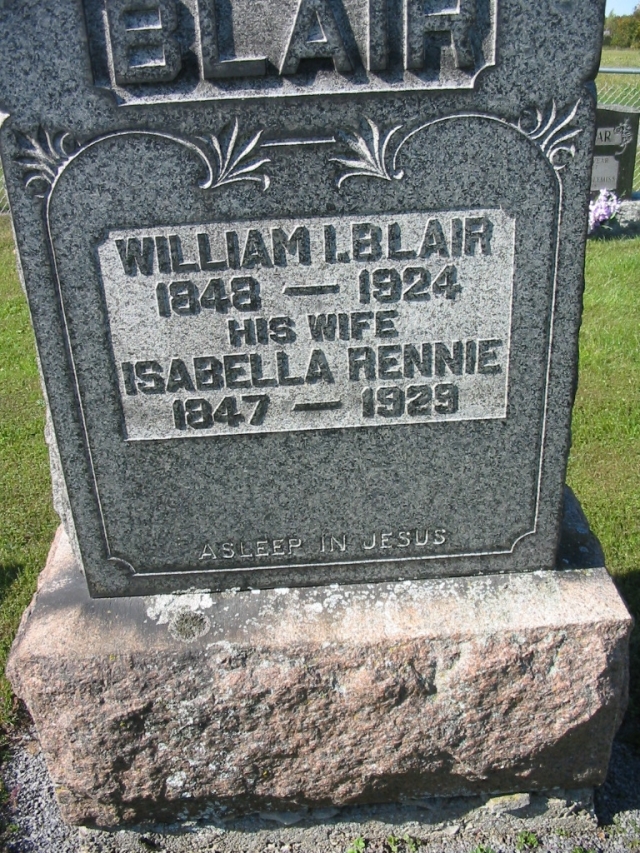 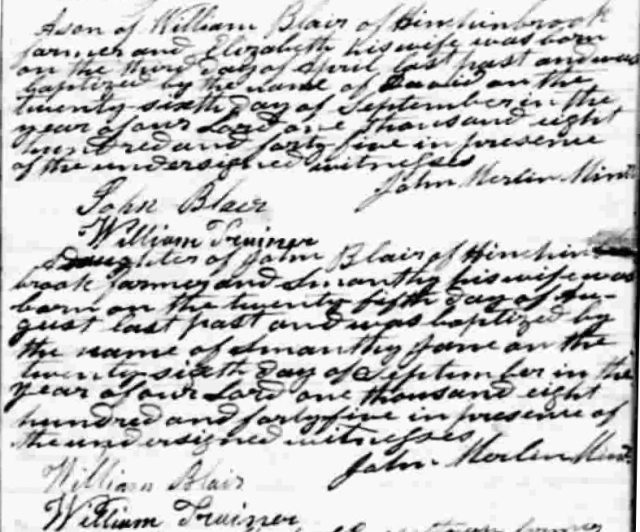 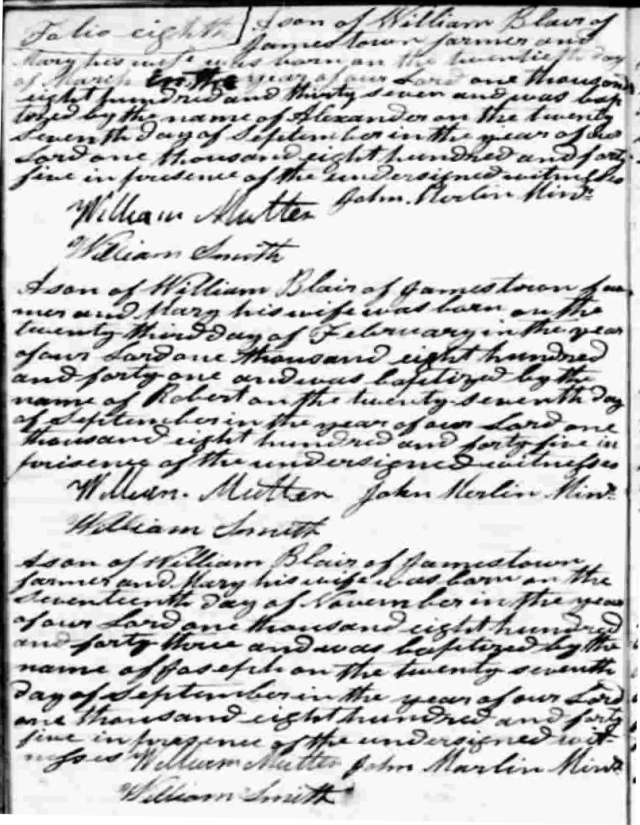 William Blair baptized Alexander, Robert, and Joseph all on the same day, 27 Sep 1845

Would the above Janette ADAIR bc.1788, wife of Alex. BLAIR be related to the
BLAIR family of Dunskey Castle, formerly owned by the ADAIRS ? —
Blairquhan – Pronounced Blair-wan, this story-book castle is located 10 miles South Southeast of Ayr, near Straiton in Ayrshire. Four families have lived at Blairquhan. The McWhirters built the first tower house about 1346. The Kennedy’s then inherited the estate through marriage and built the remainder of the old castle about 1573. In the early 17th century the Whitefords took over, but in 1798, suffering the effects of a bank crash, they sold Blairquhan to Sir David Hunter-Blair, second son of James Hunter, who married, in 1770, Jean Blair, the daughter and heiress of John Blair of Dunskey (Castle, owned by the Adairs from prior AD1486) in Wigtonshire, Scotland. When Jean Blair (Hunter) inherited her father’s estate in 1777, the family added Blair to their name.

Here is a search engine for Irish Townlands.  There are over 1,000 townlands in County Armagh alone. http://www.seanruad.com/

For more about William Blair Sr. contact Sher Leetooze <sherleetooze@interlinks.net She is descended from William Jr.’s son James, who left Quebec in the 1850’s and moved to Wolfe Island near Kingston.

This entry was posted in -7th Generation, Line - Blair. Bookmark the permalink.