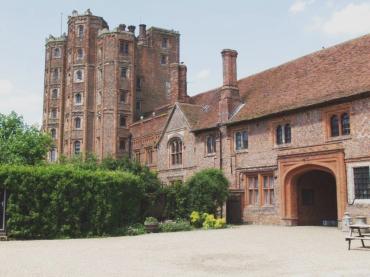 Joseph was Rector of Layer Marney, Essex, 1628-46.  The ancient and beautiful church of St Mary the Virgin is next door to the famous historic house of Layer Marney Tower

Layer Marney from the Air

Jane Rose was born about 1593 and was of Akenham, Suffolk, England when she married. Probably Jane died while her children were still growing up, date unknown, and Joseph married a second wife. This is learned from a surviving Bishops’ Transcript of Layer Marney of March 1639 – March 1640. In this period, “Joseph Downing, an infant, the sonne of Joseph Downing Clarke” was buried. Jane may have been too old to be the mother of this infant. On the other hand, this may have been her last child, after several others born in Layer Marney, as suggested above.

Children of Joseph and Jane:

Joseph Downing is the youngest brother of Emanuel Downing, the immigrant ancestor of the American Downing Family who participated in the formation of the Massachusetts Bay Company. This information collaborates with the letter written by Emanuel Downing to his brother-in-law John Winthrop, in which he names Abigail Montague as his cousin (niece).

To the Honourable his verie loving brother John Winthrop, Governor of the Massachusetts in New England,

. . . Its noe small comfort to me that I haue hope ere long to enioy your Companie. I purpose God willinge to sett forth hence in the begynning of Aprill at furthest and to take your sonne hence with me.

I follow your councell in coming to the bay before I resolue where to pitche. I pray helpe me to hire or buy some house (so as I may sell yl againe if I shall remove) in some plantacion about the Bay. Thus for present I take leave and rest leaving you and your affayres to ye blessed protection of ye Almighty.

Your assured and loving brother,

Joseph was attending Cambridge University when his parents both passed away. The town of Ipswich paid £5 to help with his schooling. He received his Bachelor of Arts at Trimity College, Cambridge, 1610-11, and his Master of Arts at Queens’ College in 1614. The Cambridge alumni records state that he was Rector of St. Stephen’s, Ipswich, in 1626 and Rector of Layer Marney, Essex, 1628-46. In 1616 Joseph’s brother Nathaniel died, and in his will he gave Joseph £20.

The 1616 marriage place of Joseph Downing and Jane Rose has not been found. The license for their nuptials states that he was of Ipswich, single, that she was of Akenham, single, and that they planned to be wed at Claydon. Claydon registers do not have the entry, nor has it been found at Akenham or elsewhere. Only the license appears in Boyd’s Suffolk Marriage Index.

The registers of St. Stephen, Ipswich, have the following: “Master Downing M.A. anno 1613 (one of the Sonnes of Mr. D., Schoole master of the Free Schoole here in Ipswich) was chosen to be preacher of this parish in May 1623 by the consent of the whole parish, Mr. Warner being verie old and not able to preach.

In 1626 John Osborne appointed his brother-in-law “Joseph Downing of Ipswich Clarke” an executor to his will.

Apparently in 1628 the family moved to Layer Marney, Essex, where Joseph again served as Rector. Joseph and Jane could have had more children after the move, their four known ones having been born in Ipswich in 1617, 1620, 1624, and 1626. The Layer Marney parish registers are extant only after 1742.

In the Winthrop Papers at the Massachusetts Historical Society, Boston, is a letter from Joseph Downing, written 28 Feb 1633/34, from Layer Marney. The letter reveals that he cultivated extensive garden and orchard space. He had sent “quodlin” plants to John Winthrop in New England, and if “you have no roses there, I will send you over some damaske, red, white and p’vince rose plants…I wish you had 100 of my best peare trees in my nourcerie.” Francis Kirby, Joseph’s brother-in-law, in a letter from London to John Winthrop Jr., dated 26 Feb 1633/34, mentioned shipping “the twigs of quodlin tree” that “my brother Joseph Downinge” had provided.