Alternatively, Ebenezer  may have first married Margaret Stewart before 1706 and had one child Ebenezer Perkins born 1706

Children of Ebenezer and Hannah:

Ebenezer moved from Ipswich, MA to Preston, CT where he bought 123 acres of land from John Hill, 27 Oct 1714.  He sold this land again to John Pray in 1715 or 1716 when he removed to Voluntown, CT. where he took possession of land at that was given to his father, Samuel, in consideration for service in the Narragansett War. (See Great Swamp Fight – Aftermath for details)  In 1735 he sold this land to John Wildes for £26. 8s. 6d.  After the sale of this land, he moved to Coventry, Rhode Island and died there before 1754.

In 1686, Thomas Parke, Thomas Tracy, and several others petitioned for and were granted by the Connecticut General Court authority to establish a plantation seven miles square to the East of Norwich and North of New London and Stonington. Owaneco, son of the Mohegan sachem Uncas, gave a confirmatory deed for the land in 1687. In October of that same year, the town was formally incorporated as Preston.

The Ecclesiastical Society of Preston was first organized in 1698, with the first meetinghouse located in present-day Preston City. At the request of residents in the northern part of Preston (now the Town of Griswold), the North Society was established in 1716. 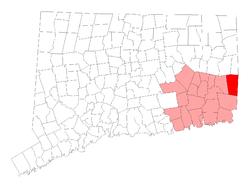 Most of the land which makes up the present town of Voluntown was granted to the Volunteers of the Narragansett War in 1700, thus the name “Voluntown.”

In 1705 the town was surveyed and boundaries were established. The plot was drawn up into lots, with each eligible volunteer receiving a lot. The land was rough terrain, although fertile soil, and was in a remote location.

In 1677, following King Phillip’s War, development of the land in the western section proceeded, and a few hardy souls had gone into the wilderness to carve their homes out of the forest in true pioneer fashion. The numerous brooks and waterways were utilized to run grist-mills and saw-mills. By 1741 there was believed to be about one hundred families living in the wilderness area which is now the Town of Coventry. The seat of government was at the settlement on the shores of Narragansett Bay (Warwick) and people had to travel twenty miles or more to record their land deeds, as well as marriages, births, and deaths. This probably required two or three days travel time, so a seat of government within easier reach became a real necessity. A petition for a separation from the Town of Warwick was placed before the General Assembly in June, 1741. This petition was granted in August, 1741 and the boundary line was established where it is today.

Ebenezer’s brother John Perkins of Preston  was a mariner, died in Curaçao in 1753 and left a will, giving property “to the children of his brother Ebenezer by his first wife.”

7 & 10. Lemuel and Francis Perkins were called mariners in their Uncle John’ will

Newman’s first wife Mehitable Godfrey was born in 1714. Her parents were John Godfrey and Martha Joyce. Mehitable died in 1794.

Samuel’s wife Hannah Leek was born 2 Mar 1723 at New Haven, CT. Her parents were John Leek and Hannah Rowe. However, the Samuel Perkins that married Hannah Leek could have been the son of Daniel Perkins and Martha Elcock.

Alternatively, his wife was Abigail Bates, b. 16 May 1722 in Voluntown, New London, Connecticut,

He continued to live in Canterbury, CT until about 1782, with the exception of two years, 1753-5, during which time he resided in Dutchess County, N. Y. He and three of his sons, Levi, David, and John, were soldiers in the Revolutionary army, and he was in the battle of New London, as a volunteer, September 6, 1781, when that place was attacked by Arnold. He was a carpenter, and taught that trade to his eldest four sons. About the year 1782, he with the remainder of his family moved to Pawlet, Vermont, whither several of his children had preceded him. In 1811 he removed to Otsego County, N. Y., and resided in the town of Hartwick, where he died in 1816, aged 88. His wife, Margaret, died in Hartford, Washington County, N. Y., from the effect of an accident, June 26, 1829, aged 99 years and 11 months.  [Just barely missed the century mark!]