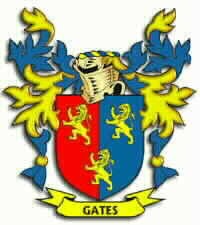 Stephen Gates I – Coat of Arms

Stephen Gates I was born about 1600 in Hingham, Norfolk, England.  His parents were Thomas GATES and Elizabeth ROSE. According to Walter Goodwin Davis, his mother’s name was Rose [__?__] and she was a widow who brought a family of sons to Hingham in 1622.   He married Ann VEARE on 5 May 1628 in Hingham, England.  Under the leadership of [our ancestor] Rev. Robert PECK, a large number of Hingham families including the Gates decided to immigrate.  With about a hundred others, most of them neighbors, he sailed with his wife and two small daughters, the Diligent of Ipswich in 1638. John Martin, Master. She sailed from Ipswich, Suffolk, in June 1638 and arrived August 10, 1638 at Boston, with about one hundred passengers, principally from Hingham, Norfolk, destined for Hingham, Massachusetts. Stephen died in 1662 in Cambridge, Mass.

Children of Stephen and Ann:

Dilligent of Ipswich, John Martin, Master. She sailed from Ipswich, Suffolk, in June and arrived August 10 at Boston, with about one hundred passengers, principally from Hingham, Norfolk, destined for Hingham, Massachusetts.
Diligent Passenger list includes these Gates:

Stephen settled in Hingham, MA where he received a grant of a three acre planting lot. His house lot was on Town (now North) Street, bounded north by the street, east by [our ancestor] William BUCKLAND, and west by the town swamp. He received a grant of half an acre of salt marsh in 1647.

Stephen and his wife probably did not become members of the Hingham church until about 3 May 1646, when their children Simon, Thomas, Isaac and Rebecca were baptized. Birth dates of the children are not found in the Hingham town records.

If Stephen was in Cambridge, Mass., in 1652, as stated by some writers, he did not remain there long, since he was one of the early settlers of Lancaster, Mass., where he subscribed to town orders 3 April 1654.

Lancaster was officially incorporated  in 1653. Until it was cut down due to safety concerns, Lancaster boasted the largest oak tree in the state, called the Beaman Oak, named after settler Gamaliel Beaman (1623–1677).  Lancaster boasts being the official “mothertown” to all of central Massachusetts. Towns such as Harvard, Stow, Bolton,  Hudson,  Marlborough,  Leominster, Clinton, Berlin and Boylston were all once considered part of Lancaster.

THE LANDS OF STEPHEN GATES in Lancaster, Masss.

entervail Lott. His enteruail Lott Containing more or Less twenty acors partly Lyeth in one peice at Quasaponikin thirteen acors more or Less bounded southardly [by a piece] of enteruail of John Whitcombs northardly [by the lot] of Mordica Maclode west by the North River [and east] by sum meadow of Edward Brick and [seven acres] more or Less lyeth betwen his house loott and the North Riuer bounded in Like maner by Nathaniel Joslins Lott north and John Whitcombs south his house Lott [east and] said Riuer west

He hath his Second devision of upland Lying to the of hog swamp meadow a considerable part of a pond Lying within the sd Land & bounded on all the sides of it by Common undivided Land a Rock called the Sleeping Rock is on the outside of it near the norwest corner the place where it Lyes by the Indians was called Kequassagansit and is Laid out to the estate of the sd Stephen Gates for three hundred & fourteen acres. . . .

The place name Quasaponikin no longer exists.  It was”A hill in the N. E. part of Lancaster, also the same name given to a meadow and brook in the early records of the town. A village in Lancaster was called Ponikin in the late 19th C.   This name may have applied first to a shallow part of the river near where the brook enters the Nashua. The northern Indians have the word Poonichuan, “where the current stops.” The Natick dialect has Ponquag, ” a ford,” also Penackinnu, “it spreads,” and Josiah Cotton gives l’ongqui as “shallow,” in his vocabulary. Dr. Trumbull says in his definition of Quassapaug, K’chepaug, “greatest pond,” a name easily corrupted to Quassapaug.  Quassaponikin corrupted, from k’che-ponquagin, would mean, “at the greatest fording place.”

While living in Lancaster he was admitted freeman 14 May 1656. He was elected constable,  a responsible and honorable position. In 1657 he failed to notify the voters about a town meeting. In consequence, he was fined ten pounds, but the fine was remitted when he informed the court that his failure was due to sickness.  It is stated that Stephen Gates was deprived of his constable’s staff. This probably occurred after his failure to notify the voters about the meeting.

In 1658 there was trouble between the Gates and Whitcomb families due to the fact that three sons of John Whitcomb had killed three swine belonging to Stephen Gates. Whitcomb agreed to pay for the swine, but afterward sought to be released from paying, claiming that he was “aged & weak and mean estate.” The court decided that he must pay for the swine. See Henry S. Nourse, The Early Records of Lancaster (1884), p. 63, for particulars concerning this case.  At the time of the Gates-Whitcomb trouble Stephen Gates was living in Sudbury, Mass.

During the family’s stay in Lancaster, Stephen’s wife gave offense of some kind to “Mr. Rowlandson”, the minister, but this was soon lost to sight in the trouble that resulted from their daughter Mary for speaking up in a public meeting in support of her mother’s word against the Minister’s.

Stephen next appeared in Cambridge, where he lived on a leased farm and he made his will, 9 June 1662, and died before 29 Sept. 1662, when the inventory of his estate was taken.

In the report of the Cambridge committee for seating the meeting house, 19 Jan. 1662/3, it was provided that “Goodie Gates” (Stephen’s widow) should be seated “at ye end of ye Deacons seats.”

Stephen’s wiil, which was made out heavily in favor of his son Stephen II, was contested by the other children. They failed to break the will. [The will doesn’t look so one sided to me, see details by Walter Goodwin Davis below.]

Stephen was reputed to have a fiery temper which his daughter Mary inherited  In January 1656/57, during a church service,  Mary disputed some statements which had been made by the Rev. Joseph Rowlandson, minister in Lancaster. Upon evidence of John Prescott (Lancaster’s founder) and others, the court convicted her of ” bold and unbecoming speeches used in the public assemblies, and especially against Mr. Rowlandson.”  She acknowledged the offense and was discharged upon paying fees for the attendance of the witnesses.

Simon was a soldier in King Philip’s War.  In 1735, his son Jonathan Gates was granted land in Narragansett Township on account of his father’s service in the war.  Simon was sued 9 Nov 1670 by John Woods of Marlborough, Mass for breaking a marriage contract with his daughter Francis.  In his suit against Gates, Woods stated that “he hath contracted with another for the great wrong of said Francis”  Simon’s daughter Abigail died 10 Mar 1774  at the age of 104.  During the last few years of her life, Abigail had to sit in a chair with a bar across the front to support her. 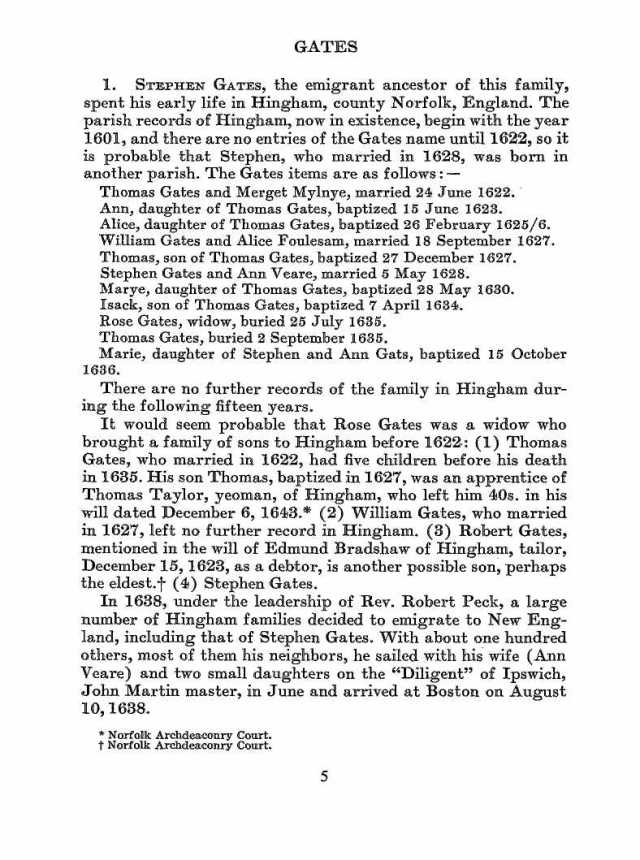 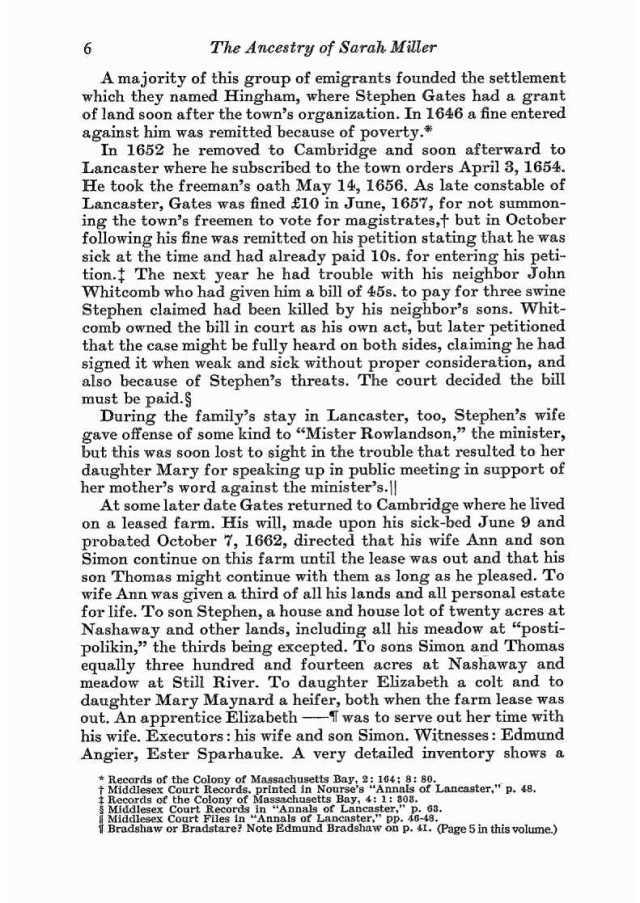 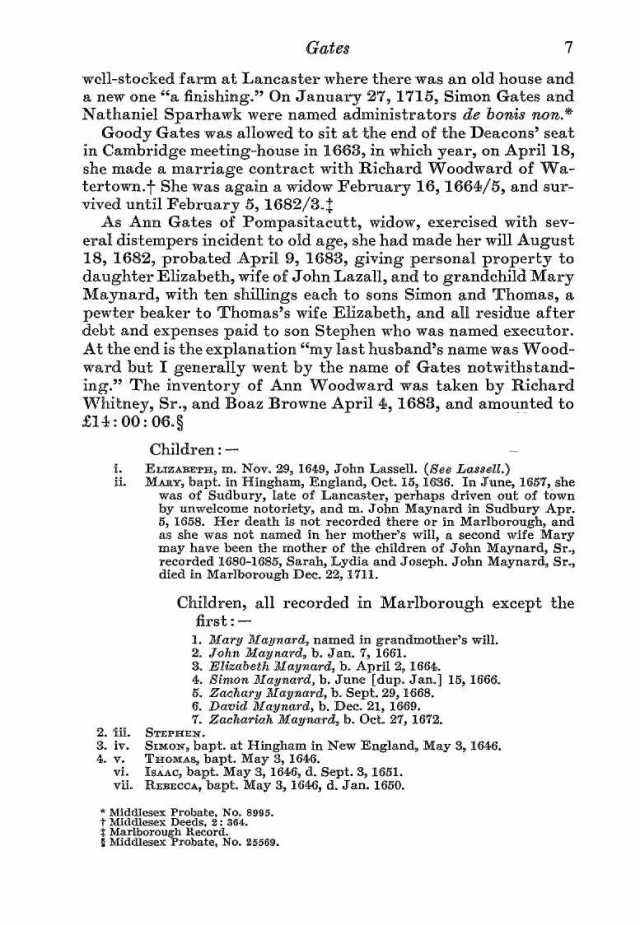 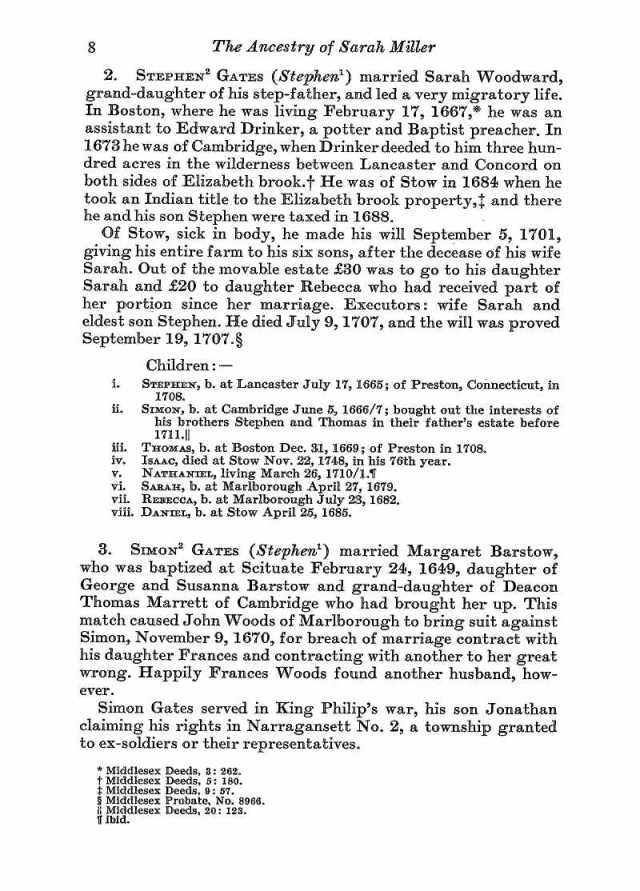 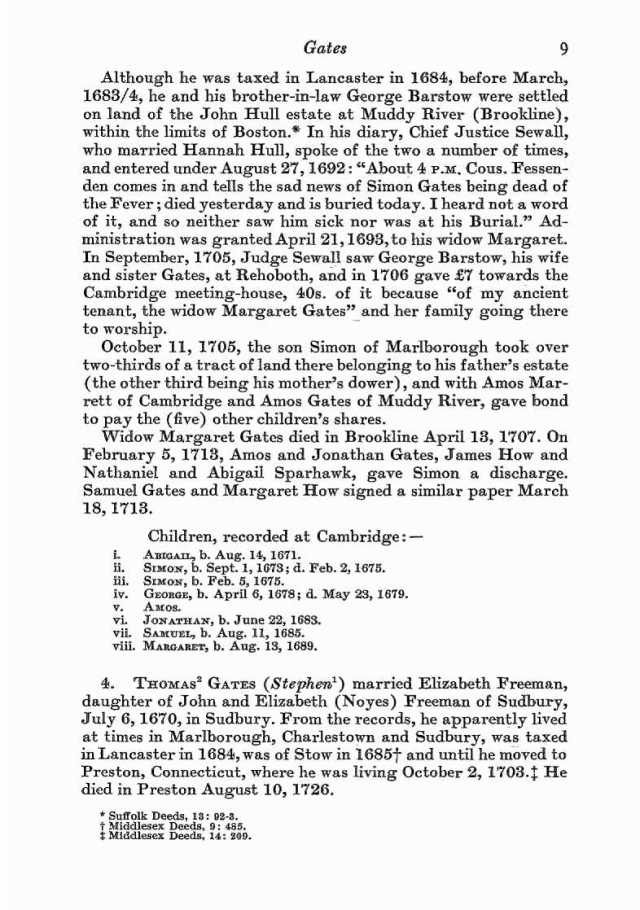 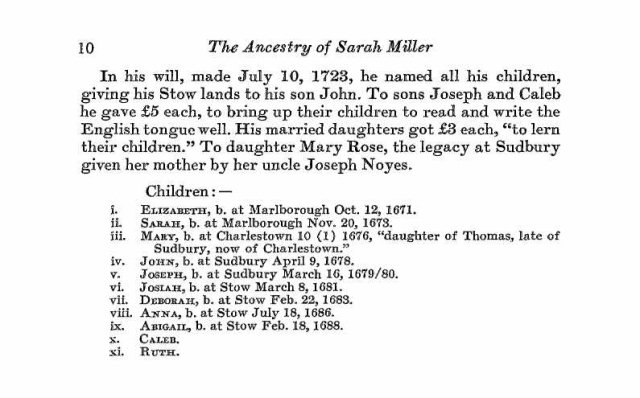 Genealogies of Connecticut families: from the New England historical and … By Judith McGhan, Genealogical Publishing Co

8 Responses to Stephen Gates I