Lionel CHUTE (1580 -1645) was the first Ipswich schoolmaster in 1636. Alex’s 11th Great Grandfather, He is one of4,096 in this generation of the Shaw line and one of 4,096  in the Miller line.  (See his great grandson Thomas BROWNE for details of the double ancestors)

Lionel Chute Sr. was born in 1580 in Dedham, Essex, England.  His parents were Lionel CHUTE and Susan GREENE.  He married Thomasine (“Rose”) BARKER in 1612 in  Belstead, Suffolk, England.  An article on The Two Wives of Lionel Chute, published by William Wyman Fiske for NEHGS in their quarterly journal in April of 2009 argues that Thomasine and Rose were in fact two different people.  He emigrated to Ipswich, Massachusetts Bay Colony about 1634.  Lionel died 7 Jul 1645 in Ipswich, Massachusetts Bay Colony. 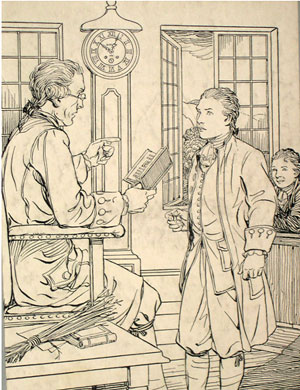 Lionel Chute was a the first School Master in Ipswich, Mass

Thomasine (“Rose”) Barker was born around 1580 in England.  Her father was Robert BARKER.  After Lionel died she married Deacon Matthew Whipple 13 Nov 1646 in Ipswich Mass.

Joshua Coffin said, in 1857, that Lionel Chute married Rose, daughter of Samuel Symonds, Lieutenant- Governor, of Massachusetts, but in reality his son’s mother-in-law, Martha Reed Epps Symonds  married George Samuel Symonds after her first husband’s death.   George Samuel Symonds was to become a deputy governor of the Massachusetts Bay Colony and had several children with Martha. The confusion came when Symond’s will named James Chute Sr as his son instead of son-in-law.  Marke Simonds was a witness to Lionel’s will so the families were close before the marriage.

Children of Lionel and Rose:

While Lionel, Rose, James or Nathaniel have not been located on any existing passenger lists, there are several distinct Chute family stories about how the Lionel Chute and his family arrived in Ipswich, Massachusetts:

They arrived on the Hercules. Passenger lists, while admittedly incomplete, have not included anyone by the name of Chute. The assumption regarding the Hercules is based on Bethersden Edward Chute’s letter of confirmation on another family, the Ashfords, who also sailed on the Hercules, and Lionel’s date of arrival.

They arrived on the Lion. The Lion/Lyon theory first appeared in print during a recorded speech made by James Milledge Chute, on March 22, 1906, at the dinner celebrating the eighty-third birthday of Isaiah Chute, of Peabody. In addition to being a magnificent speech about the Chute family, this is the first known reference to Lionel Chute, Jr. having arrived in America on the “Lion” out of Bristol. Records of this voyage have not yet been located, and it is not known how James Milledge Chute obtained this information.

He arrived as a sea captain, which is why he never appeared on passenger lists. Out of all the family legends, this has always seemed the most remote and unlikely: Lionel was a clerk and a teacher from Dedham, the son of a clerk from Brampton — for him to suddenly charge across the Atlantic as a sea captain seemed … well, ludicrous. But a “Captain Lionel Chute” does appear in print, and was found back in the 1950’s by Joseph Herman Chute, who found it in a Library and mentioned it in a letter to George M. Chute, Jr.

His arrival coincides with the second wave of a large migration of Puritans (the first wave began with the Pilgrim arrival in 1620), seeking freedom from persecution for their religious beliefs in Great Britain. It also coincides with the accession of King Charles I in 1625, and the appointment of William Laud (1573-1645), considered a particularly sadistic enemy of the growing Puritan movement, to increasing positions of power in Great Britain: to the Privy Council in April 1626, to Bishop of Bath and Wells, then Bishop of London in 1628, and finally to Archbishop of Canterbury in 1633. Laud was also becoming increasingly powerful in political affairs as well. While his persecution focused more on Anglican ministers, Laud’s punishment for those who disagreed with him (in 1637, after Lionel and family had arrived in Massachusetts, English Puritans John Bastwick, Henry Burton and William Prynne “had their ears cut off for writing pamphlets attacking Laud’s views.”), the political climate under Charles I and Archbishop William Laud may have been the precipitating force behind Lionel’s immigration. He was not a young man at the time of his departure from Great Britain and he must have known that he would most certainly never see his homeland again.

Dedham England was the home of John Rogers a Puritan preacher from 1605 to 1636. The windows were taken out of the parish church so that more people might hear him. His rule was so to preach every time that he could come down from his pulpit with a clear conscience. One of his enemies said that his preaching poisoned the air for ten miles around, but a friend said that more souls were saved under his preaching than in any other part of England. Once, twice, thrice, he was silenced by the church authorities in their stickling for outward uniformity. At length the persecutions he suffered seemed to break his heart, and he is said to have fallen in his pulpit and to have been carried out but to die. His descendants filled the pulpit of the first church in Ipswich, Mass., for a hundred and fifty years, one of his grandsons was president of Harvard College.  This illustrious Puritan preacher has a double connection with Byfield, for he was brought up in the family of Richard Rogers, the father of Rev. Ezekiel ROGERS, first pastor of Rowley, one of the two mother parishes of Byfield, and no doubt his preaching was a potent factor in determining Lionel Chute to go with the Puritan colony beyond the sea.

“The new arrivals found that with true Puritan zeal for the education of youth both colony and town governments were making provision for college and schools. To perpetuate a learned ministry, the general court of Massachusetts Bay on October 28, 1636, appropriated £400 for a school or college, and a year later appointed a committee “to take order for a colledge at Newetowne.”  On April 13, 1635, the town of Boston agreed “that our brother Philemon Pormont, shalbe intreated to become scholemaster, for the teaching and nourtering of children with us,” and on August 6, 1636, forty-five of the wealthier inhabitants of the town pledged £40 6s. in amounts varying from the £10 of Governor Henry Vane to the 3s. of John Pemberton for “the maintenance of a free school master for the youth with us,” and chose Daniel Maude, a graduate of the University of Cambridge, as master. William Witherell undertook the education of the children of Charlestown, and Lionel Chute and John Fiske wrestled with similar duties at Ipswich and Salem.  With these projects, not unlike those at one time undertaken by the feoffees for the purchase of impropriations in England, Davenport was in hearty sympathy, and served as one of the first overseers for the college.”

Item. I give unto Rose, my wife, for terme of her naturall life, all this my dwelling house, with the barne & all the edifices (the two chambers over the house & entry only excepted which I will that James my sonn shall have to his only use for the terme of one yeare next after my decease, with free ingresse egresse & regresse, &c), with the yards gardens the home lott & planting lott purchased of Mr. Bartholomew, with the commonage & appurtenances thereto belonging: & after my wife’s decease I give the said house barne lotts & premises with all the appurtenances unto James Chute my sonne & to his heirs.

Item. I give unto my said sonne James & to his heirs forever all & singular my other lands, lotts, meadow grounds, marshes with all & singular their appurtenances & profit whatsoever immediately after my decease; & I give more unto James Chute my sonne (over & above all things before given him), my heffer that is now at Goodman White’s farm, & my young steere.

Item. I give him all my books with all things in my chest, & white boarded deep box with lock & key, one chain four hogsheads two coomsacks two flock bedds two feather pillows one rugg 2 coverletts two blankets my casting nett my silver spoone all my own wearing apparell & that which was his brother Nathaniel’s & three pairs of sheets three pillow beeres two table cloths four towells six table napkins & the one half of the brass & pewter & working & five bushels of English wheate.

Item. I give unto my friend Joseph Morse five shillings.

Item. I give unto the poore of the church of Ipswich twenty shillings to be distributed by the deacons.

Item. My meaning is that my wife shall have my chest after that James hath emptied it.
Item. All the rest of my goods household stuff cattell & chattells whatsoever unbequeathied (my debts & legacies being discharged & paid), I will that Rose my wife shall have ye free use of them for terme of her life, but the remainder of them at the time of her decease over & above the value of five pounds sterling I give unto James Chute my sonne & to his heirs & assigns.

Item. I make Rose my wife executrix of this my last will & testament & in witnesse that this is my deed I have hereunto set my hand & seale in the presence of these witnesses hereunder written,