The surname of BAYES was a locational name ‘the dweller at the outer wall of a feudal castle’.

Anna Baker was born in 1617 in England. Her parents were Alexander BAKER and Frances G. PENDLETON.  Anna died in Edgarstown, Mass.

Children of Thomas and Anna

In 1635 there were rumors in the Massachusetts Bay Colony that a war with the local Indians was impending and a fear arose that the few, small, coastal communities that existed were in danger of attack. This, in addition to the belief that the few towns that did exist were too close together, prompted the Massachusetts General Court to establish two new inland communities. The towns of Dedham and Concord, Massachusetts were thus established to relieve the growing population pressure and to place communities between the larger, more established coastal towns and the Indians further west.

The grant from the colony gave them over “two hundred square miles of virgin wilderness, complete with lakes, hills, forests, meadows, Indians, and a seemingly endless supply of rocks and wolves. Aside from “several score Indians, who were quickly persuaded to relinquish their claims for a small sum, the area was free of human habitation. The original grant stretched from the border of Boston to the Rhode Island border.

Thomas arrived in  the summer of 1636 when Dedham was settled by “about thirty families excised from the broad ranks of the English middle classes” traveling up the Charles River from Roxbury and Watertown traveling in rough canoes carved from felled trees.These original settlers paddled up the narrow, deeply flowing stream impatiently turning curve after curve around Nonantum until, emerging from the tall forest into the open, they saw in the sunset glow a golden river twisting back and forth through broad, rich meadows

The first public meeting of the plantation they called Contentment was held on August 18, 1636 and the town covenant was signed; eventually 125 men (including Thomas) would ascribe their names to the document. As the Covenant stipulated that “for the better manifestation of our true resolution herein, every man so received into the town is to subscribe hereunto his name, thereby obliging both himself and his successors after him forever.” They swore that they would

“in the fear and reverence of our Almighty God, mutually and severally promise amongst ourselves and each to profess and practice one truth according to that most perfect rule, the foundation whereof is ever lasting love.”

They also agreed that “we shall by all means labor to keep off from us all such as are contrary minded, and receive only such unto us as may be probably of one heart with us, [and such] as that we either know or may well and truly be informed to walk in a peacable conversation with all meekness of spirit, [this] for the edification of each other in the knowledge and faith of the Lord Jesus…” Before a man could join the community he underwent a public inquisition to determine his suitability. Every signer of the Covenant was required to tell all he knew of the other men and if a lie was uncovered the man who spoke it would be instantly excluded from town.

The covenant also stipulated that if differences were to arise between townsmen that they would submit the issue to between one and four other members of the town for resolution,

“eschew[ing] all appeals to law and submit[ting] all disputes between them to arbitration. The commitment in the Covenant to allow only like-minded individuals to live within the town explains why “church records show no instances of dissension, Quaker or Baptist expulsions, or witchcraft persecutions.”

They also agreed to pay their fair share for the common good. 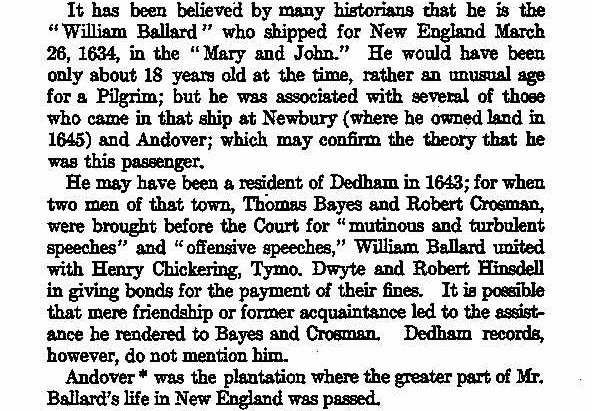 Thomas Mayhew was the self styled Governor of Martha’s Vineyard.

Some sources say Abigail’s first husband was Hackaliah Bridges, but this marriage probably didn’t happen.  Hackaliah  was born about 1638  in Andover, Essex, Mass. His parents were Edmund Bridges (1612 – 1684) and Elizabeth Manwaring (1612 – 1664). Most genealogies say Hackoliah died Feb 1671/72 in Martha’s Vineyard, Dukes, Mass, some giving the more specific date of 18 Feb, but he actually drowned 23 Nov 1671.  18 Feb 1672 was when administration of his estate was granted to his brother Obidiah who was to bring in an inventory.

Hackaliah got into a lot of trouble.  He was fined for running away from his father and later got two unmarried women pregnant all before he was twenty years old. In one court case he was sued for defamation, in another for debt.

Hackaliah Bridges, accused by Sarah ffrench of his getting her with child, bound over, being brought by Sergent ffrench, was discharged

Hackaliah Bridges fined or to be whipped for lying, and to pay Josias Hubbard for his gloves. [John Younglove and Samuel Belcher deposed that he inquired of Hackiliah Bridges one night that week concerning a pair of gloves with black fringes, which Nehemiah Jewett took from Edmund Bridges, laying claim unto in his brother Josiah Hubbard’s name, and Hackiliah said that he bought them of John Smith of Rowley for two shillings. Sworn in Ipswich court April 9, 1657.

Edmond Bridges, for fornication, etc., to be severely whipped and bound to good behavior. Mary Browne, for suffering it, to stand by and see him whipped.

[Samuel Younglove, aged twenty years, testified that Edmond Bridges was mowing with him, and Bridges told him all his undue relations with Mary Brown* and Mary Quilter, and John Allen Mary Browne ; and he had been persuad-ing Thomas G it tins and others, etc. Sworn to in Ipswich court 29 : 7 : 165 ‘■

Simon Stacey deposed that he met Bridges on lecture day, and asked Bridges if he had heard of the story around town of him (Bridges) and two wenches. I said, No. He said he told Samuel Younglove about it, and the simple went and told Thomas Fowlar. Bridges confessed it in court.

Hackaliah Bridges to be severely whipped for fornication ; to give bond of good behavior and to secure the town about bringing up the child.

Mary Quilter to be severely whipped for fornication.

[John How deposed that last Michaelmass, going over the new bridge he overtook Hackaliah Bridges, who asked him to go with him (Bridges) to Mr. Rogers, where he said he had a wench, Mary Quilter, and boasted of his relations with her. I went with him as far as William Avrey. Then I parted to my uncle Danes, and he went to Mr. Rogers. I spoke to him of this business in the prison, and he bid me hold my peace, for he had resolved to deny it, and knew they could not whip him, unless they could prove it, or I confess. Sworn in Ipswich court 29 : 7 : 1657. — Files.’]

Ordered that such as were bound to secure the town from any charges of Hackaliah Bridges’ child by Mary Quilter, pay two-fifths of what they subscribed in the bond unto the widow Quilter at or before February 1st next and they should be discharged of their bond, and those who did not should be liable to pay the whole amount.

*Writ: Mr. William Patteeson v. Anthony Carrill; defamation; for reporting that he heard Hackaliah Bridges say at Mr. Baker’s that he heard it spoken at Edward Dear’s house that plaintiff stole from his master in Barbadoes fifteen hundred pounds, and further reported that Ed. Deare’s wife replied “I doubt Hacaliah is mistaken for the marchent himself did owne he stole five hundred pounds from his master;” dated, Jan. 27, 1667; signed by Robert Lord,f for the court; and served by Robert Lord.f marshal, by attachment of farm and house of defendant, and, not giving security, he committed him to prison.

William Norton deposed that he heard Anthony Caryll own Mr. Patersen’s charge against him etc. John Edwards deposed the same. Sworn in court.

Edmond Bridges, Hachaliah Bridges and Daniel Blacke deposed that Mr. Pattarson agreed to acquit Hachaliah Bridges if the other two deponents would testify that Anthony Carall reported the story. Sworn in court.

Robert Lord, jr., deposed that being in Mr. Patterson’s chamber with Mr. Norton and Anthony Carroll, etc. Sworn in court.

Andrew Petters and Robert Lord, jr., deposed that having occasion to be in Topsfeild, they met Hackaleah Bridges riding near the meeting house, and asked him why he allowed the poor man to lie in prison for words which he spoke himself and he replied that he went to Patteeson’s chamber, etc. Sworn in court.

Jonathan Ransford, aged thirty odd years, deposed that he, being in Barbadus some years before at a great sessions, saw William Patterson stand at the bar, and upon inquiry what it was for, was told that it was for persuading Mr. Jno. Bawden’s man to let him have some of his master’s sugar to carry along with him in partnership. And after the jury had brought in their verdict, deponent saw said Petterson standing in a place called the “bale dock,” and inquiring how he got clear, they told him by a fine of some thousand of sugar. Sworn, Mar. 19, 1667-8, before Jno. Leverett,t assistant.

Stephen Haskit of Salem deposed that he went with Francis Wainwright to Hackoliah Bridges and he promised to pay him above three pounds, etc. Sworn, Sept. 28, 1670, before Daniel Denison.J

Thomas Booen, aged about forty-seven years, deposed that he heard Frances Wandret, on Sept. 15, 1670, ask Hachahah Bridges for a note to Goodman Duch for a parcel of fish which he was informed was in said Duches hand. Said Bridges replied that the fish was none of his for it was already engaged but he would pay him in brick. Wandret said he would take anything and told him not to meddle with the fish. Sworn by Bowen and his daughter Ruth, 23 : 7 : 1670, before Wm. Hathorne, assistant.
The History of Martha’s Vineyard by Dr. Charles Banks:Volume III Family Genealogies: pp. 41-45 Compiled by Dr. Charles Banks, c. 1925.

HACKOLIAH BRIDGES, previously of Ipswich, was a resident of the Vineyard and was drowned “att the Gay Head” 23 Nov 1671. His estate was administered by Richard Sarson.

He is the only Hackaliah I have encountered. Hachaliah was the father of Nehemiah, the author of the Book of Nehemiah, which is a book of the Hebrew Bible, known to Jews as the Tanakh and to Christians as the Old Testament. Hachaliah’s name is mentioned at the beginning of the book. Hachaliah distinguishes Nehemiah from others with the same name. Little is known about his status; his name means: ‘whom Jehovah enlightens

Abigail’s second husband Timothy Batt was born 1645 in Salisbury, Mass. His parents were Christopher Batt (1601 – 1661) and Ann Baynton (1602 – 1679). Timothy’s parents were baptized and married in St. Edmonds, Salisbury, Wiltshire. They immigrated on the Bevis from Southampton in May 1638. Christopher was a merchant in Boston. Timothy died Jan 1678/79 or about 1697 in Boston, Suffolk, Mass

In January, 1671/72, Timothy Bait’s name is mentioned in connection with the settlement of the estate of Hackoliah Bridges who was drowned at Gay Head.

Timothy was a tailor in Boston.

Children of Abigail and Timothy

Timothy Jr. was a cordwainer.

vol. 1, page 227, of the Land Records of Dukes County, under date of March 16, 1696-7, Timothy Batt, of Boston, cordwalner, son of Timothy Batt, of Boston, lately deceased, gives power of attorney to Mr. James Breading, of South Hampton, N. V., names “my father’s estate” and “the legacy that was left me by my grandmother Bayes, of Martha’s Vineyard, deceased.”

Samuel was a carpenter. He was admitted freeman in Boston in 1672. Between 1673 and 1701, he was elected or appointed to town office during 14 years; also being a member of Capt. Hill’s (1677) company, he was chosen a thithing man in 1686, served on special committees; the last service being in 1718 to inspect the town in regard to the observance of the by-law for keeping ladders at each house.

Children of Samuel and Hannah: