Capt Andrew Newcomb was born about 1616 or 1618 in Tormoham, Torbay, Devon, England. His first married Susan COCK.  Susan died in England and he emigrated with his children.  (It is possible that Andrew Jr. was a nephew instead of a son, see discussion below) Some sources say he was a Sea Captain who first arrived in Barbados and from there removed to Virginia.   He married  second Grace [__?__] Ricks in 1663 in Boston Mass and lived in the former residence of William Ricks.  Andrew died 31 Jan 1688/86 when he was found dead floating near Plum Island off the northeast coast of Massachusetts, north of Cape Ann.  The left side of his face was swollen as if he had received a great blow, but the cause of death was not determined.

Children of Andrew and Susan:

.
Child of Andrew and Grace Ricks:

New York Col. MSS. at Albany, vol. 21), page 13, date Aug. 28, 1679, show “Andrew Newcombe” to have been “Master of y’ Sloope Edmund and Martha,” then in the port of New York and bound for “Boston in New England;” probably from Virginia—a part of his lading being tobacco.

Suffolk Court files at Boston contain deposition of Philip Foxwell, in which the statement is made that Andrew Newcomb was with his [ Newcomb’s] vessel iu Saco River from Boston, Oct., 1684—this being the last mention of his name prior to proof of his Will a little more than two years later.

Suffolk Deeds contain copy of Agreement, date Feb. 14, 1072, in which Andrew Newcomb and wife Grace are to enjoy during life the old dwelling-house, “now in the tenure and occupation of the said Newcomb,” formerly of William Ricks, deceased; John and Thomas Ricks, sons of William, to have the new dwelling-house adjoining the same, etc., near the water-mill in Boston, half of land to each; they to pay Newcomb £20.

Capt. Andrew Newcomb made a will on 31 Jan 1682/83. His will mentions only his wife Grace, daughter Grace Butler, grandson Newcomb Blake by name, as relatives. “Wife’s grandchildren” mentioned in as group. No mention was made of son Andrew. There is some current debate if Capt. Andrew was actually the ancestor of the Newcombs or if Lt. Andrew, his purported son, was not his son but came from Devon on his own.

Many North American Newcombs claim descent from a Lieutenant Andrew Nucomb  supposed son of Sea Captain Andrew Newcomb born in England in about 1618 who both appear in the records of New England in the mid 1600s.

Much of our knowledge of Captain Andrew and Lt. Andrew comes from a genealogy published in 1874 by John Bearse Newcomb of Elgin Illinois entitled “Genealogical Memoir of the Newcomb Family”. JB Newcomb employed “Antiquarians” to search both the New England records and British Isles (Devon) records for indications of where the Andrews came from in England. He was not successful in this and claimed “a lack of means” prevented him from solving the problem.

John Bearse Newcomb explains why Andrew Jr. might not be mentioned in Andrew Sr.’s will

The fact that Capt. N. also, at the time of making his will, held peculiar relations to his grandchild Newcomb Blague,.who demanded from his youth and condition as an orphan ( then 12 years old, and the only living child of his parents) his most conscientious consideration, and that his child Grace Newcomb,3 by his 2d wife, had in her mother a watchful guardian or friend in presenting her claims to the consideration of Capt. N.; all of which easily and plainly may account for the diversion of his property from his sou Lieut. N. It needs but to be added that in colonial times, where bequests were not made to children of the testator, their names were frequently omitted.

Bethuel Merritt Newcomb attempted to solve the problem in his book “Andrew Newcomb and his Descendants” published in 1923. He to ran into problems when the English records were removed for safe keeping during World War I. His book is a continuation of the JB book with little additional information on the two Andrews. BM was wealthy and employed many researchers in the pursuit. Both men appear to have exhausted the New England records without result.

JB tells us that the first record of Captain Andrew in North America is in 1663 when he married his second wife Grace Ricks (widow), they lived in Boston.  He states his first wife’s name was not known.

The first record of the Lt. Andrew Nucomb is from a meeting he attended on the Isle of Shoals (off Portsmouth, N.H.) in July 1666 where he was known to be living until he removed to Marthas Vineyard about 1675. His first wife Sarah died the previous year He was a Lieutenant in the militia hence is referred to as Lt. Andrew Nucomb. He died in between 1703-1708.

Captain Andrew was known from New England records to be the master of various sailing vessels between New England and Virginia. JB says Lt. Andrew was son of Captain Andrew and that a father/son connection will be established later in the book. A careful reading of the book however fails to show any evidence of the relationship of the two Andrews. The only indication that they are connected is that their first and last names are the same and they were in the same geographical area at the same time. In my opinion there is evidence contrary to them being father and son. Lt. Andrew spelled his name Nucomb while Captain Andrew usually spelled it Newcombe though he occasionally dropped the “e” and once it was written “Nucombe”. Both men were literate according to JB. In his will probated in 1686 Captain Andrew left his estate to his Grandson. No mention of any other children appear in the will. JB feels this was due to their being no need to assist his son Andrew who was well off by that time.

JB’s book says of Captain Andrew: “That he was born in England is quite certain; “that he immigrated from the “west of England,” perhaps Devonshire or Wales, nearly all traditions declare.” This would certainly narrow the search but how much credit can we give to “tradition”? JB began his research in 1861. He interviewed some elderly Newcombs who would have been born in the late 1700’s. Oral tradition would have been approximately 100 years older than the death of Lt. Andrew, but may well have survived the few generations between Lt. Andrew and JB.

The IGI shows Devon and area to have had a relatively large Newcomb population in the 1600s. The Devon records have two Andrew Newcombs living in Devon at the right time and within five miles of each other, but not as father and son. That they were related in some other way seems quite possible.

Tormoham, Devon is a seaport on the English Channel. Records show an Andrew Newcomb married Susan Cock in Tormoham, 13 Aug  1648. Their daughter Suzanna was christened 10 May 1649. No other births are shown for this couple. BM lists a daughter of Captain Andrew named Susanna, born between 1645-1650. The record also shows Suzan wife of Andrew Newcomb buried 23 Apr 1652. We know from JB that Andrew remarried in 1663 at Boston. The record shows no other births or deaths for this family. It seems possible that this is Captain Newcomb and his first wife Susan Cock. After the death of his wife he immigrated to North America with daughter Susan.

Five miles North west of Tormoham is Wolborough, (Newton Abbot). This place is not on the sea. Six children were christened to the family of a Thomas Newcombe as shown below.

The child Andrew Nucombe may well be our Lt. Andrew. His year of birth exactly agrees with the age given in JB in the court deposition9 in March 1672 as “thirtey tow yeares or theare about”. Three of Lt. Andrew’s children by his second wife are named Mary, Elizabeth, and Emlen or Emiline10, which match his sisters names. Mary and Elizabeth are common names but Emeln was not common at that time. From his first wife their first son was Andrew but the third son was Thomas, perhaps named after the fathers father.

What then is the connection between the two Andrews? The fact that they were living within a few miles of each other in Devon suggests that they may be related. The fact that Captain Newcomb lived by the sea in Devon while Lt. Andrew lived inland, fits with the facts that in North America Captain Andrew was a sea farer all his life while Lt.Andrew appears to have spent more of his life on land though he did engage in fishing yoyages when he was younger. The record names Andrew of Wolborough’s father as Thomas therefore the Tormoham Andrew cannot be his father. The immediate area around Tormoham/Wolborough has only a few Newcombs according to the IGI. It may be that Lt. Andrew was a nephew or cousin of Captain Andrew and they came to North America together or separately.

But maybe the name is so common that other Andrews can be found at other locations in England that would match up. A search of the IGI  failed to find any other matches that are remotely likely. Indeed from 1600-1640 only three Andrew Newcombs are recorded in the IGI for the entire British Isles. For comparison purposes the number of records of common given male names are extracted from the IGI for the 1600-1640 period, for the surname Newcomb (and all spelling variants), for all of the British Isles.

In summary we find two Andrew Newcombs living in close proximity in Devon which is one of the possible areas mentioned in the “tradition”. All birth and marriage dates match closely with those estimated by JB, there are no contradictory dates. Names of children appear to be from previous generations. No record appears in the IGI of these two Andrews being in England when they were known to be in North America.

What can be done to further the case? A non-transcript copy of the original documents from Devon England is necessary to prove the accuracy of these records which are a double transcript. I understand that they are only available in Devon and have not been released to any library but can be viewed locally on microfiche. This copy is very difficult to read as it has faded badly. A search of various records from Devon from 1663-1730 or so would reinforce the theory if the Andrews are absent from England and disprove it if they are present. 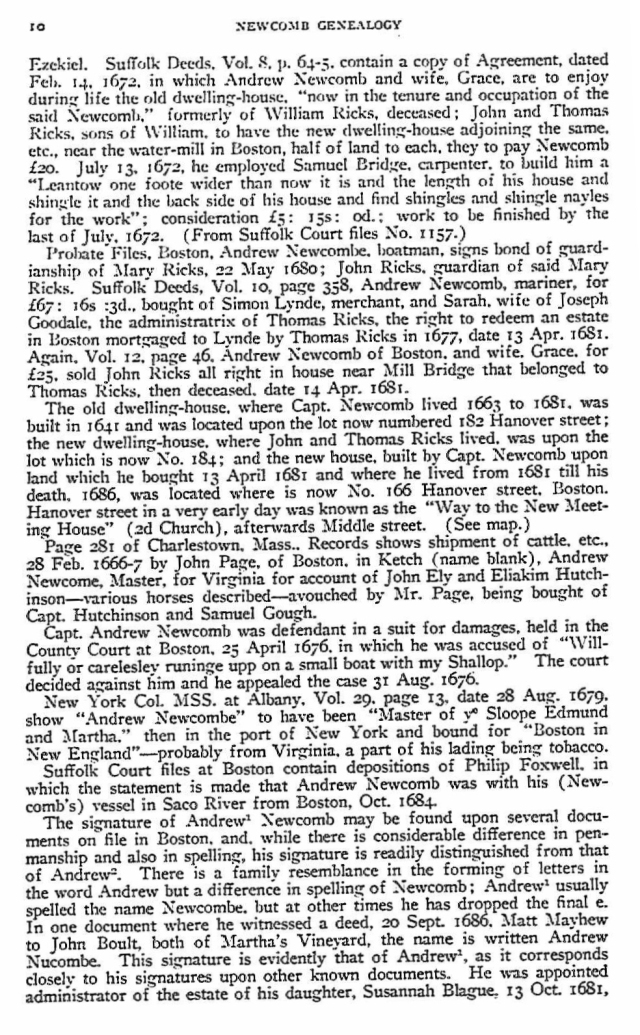 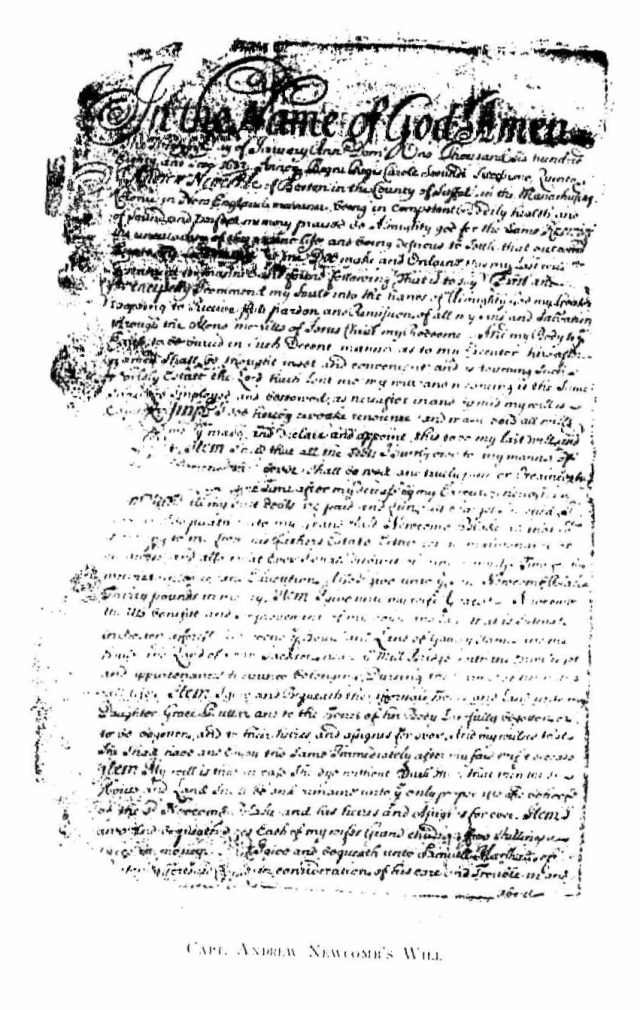