Ebenezer Hawes was born on 28 Mar 1679 at Yarmouth, Plymouth Colony.  He was the son of Capt John HAWES and Desire GORHAM. He married Sarah NORTON at Edgartown, Dukes, MA, on 23 Feb 1700. Ebenezer died 7 Oct 1727 at Yarmouth, Barnstable, Mass.

Children of Ebenezer and Sarah:

Ebenezer was a man of prominence in Yarmouth and Chatham and was a Captain in the militia. 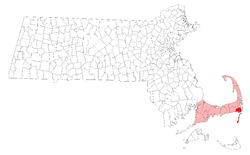 ~1706 – Removed to Monomoy, afterwards Chatham.  Native American tribes who lived in the area before European colonization include the Nauset, specifically the Manomoy or Monomoy people. “Manamoyik” was a Nauset village located near present-day Chatham. Explorer Samuel de Champlain landed here in 1606, contacting (and skirmishing with) the Nauset. English settlers first settled in Chatham in 1665, and the town was incorporated in 1712, naming it after Chatham, Kent, England. Located at the “elbow” of Cape Cod, the community became a shipping, fishing, and whaling center. Chatham’s early prosperity would leave it with a considerable number of 18th century buildings, whose charm helped it develop into a popular summer resort.

1709 -” One of two appointed to make preparations for a minister”

1716 – Appointed town agent to demand, sue for and recover from Rev. Mr. Hugh Adams “what the said Adams oweth to the town of Chatam” with the power to retain attorneys. 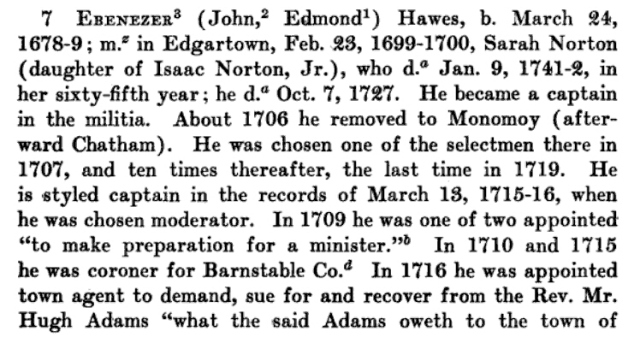 Children of John and Susannah:

Children of Desire and John:

Children of Isaac and Mary

Children of Ruth and Joseph

Grindal graduated from Harvard College in 1741 and received his M.A from Yale in 1753.

1751 – He was installed as the Congregational minister in Ware, Massachusetts., but resigned January 30, 1754

1755 – He became the minister of the West Yarmouth Church a month before his marriage to Desire Thacher. He was dismissed in 1760.

Rev. Mr. Rawson was living with his son, Jonathan Rawson, in Dover, New Hampshire, when he died in Sutton, Massachusetts., while on a to Sutton, Mass to visit his son Ebenezer.

Children of Benjamin and Anna:

Children of Bayes and Jean:

Edmond Hawes of Yarmouth, Massachusetts: an emigrant to America in 1635, his ancestors, including the allied families of Brome, Colles, Greswold, Porter, Rody, Shirley and Whitfield; and some of his descendants  1914