Daniel Warner was born in Boxted, Essex, England about 1618.  His parents were William WARNER and Abigail BAKER.  Daniel sailed with his parents from London to America in 1635.  It is said by some Warner genealogists that they sailed on the ship,”Increase“.  He came to Ipswich with his family in 1637 and became a freeman there in 1641. He married Elizabeth DENNY 2 Jun 1641 in Ipswich Mass..  He married his second wife Faith Lord, the widow of Edward Browne on 1 Jul 1660. He married his third wife, the widow Eleanor Pell of Rowley in June 1686.  Daniel died 9 Sep 1688 in Ipswich, Mass.

Eleanor Pell and her first husband John BOYNTON are our ancestors through their son Caleb Boynton.  Elinor was born about 1616 in England. Her parents were Joseph PELL and Elizabeth JAMES.  According to Blodgett and Jewett, Ellen Pell was a maid-servant of Atherton Haulgh (Hough), who was admitted to the Boston church, April 5, 1641, and “dismissed 1:8: 1643 to Rowley; letter granted 21: 2: 1644, when she was wife to John BOYNTON , member of Rowley Ch.” After John died, she married Deacon Maximillian JEWETT on 30 Aug 1671.  Finally, she married Daniel WARNER on 1 Jun 1686 in Ipswich, Mass.  Elinor died 5 Aug 1689 in Rowley, Mass.

It appears there were two first cousins, both named Ruth, born a couple years apart who both immigrated from Massachusetts to New Brunswick;  William FISKE and Marah [__?__]‘s daughter Ruth and Joseph FISKE  and Susannah WARNER‘s daughter, Ruth.  Many genealogies mix these two women up, but it’s not possible that the same woman was mother to both Richard ESTEY‘s children and David Kilborne’s children because they were born at the same time.  It”s more likely that William Fiske’s daughter was our ancestor, but I’m including posts for both families.

Children of  Daniel and Elizabeth all born in Ipswich, Essex County Mass.

1648  – Daniel was a subscriber to the fund to retain Major General Denison in charge of Military Affairs.

1661 – A road was allowed through Daniel’s 6 acres by Saunders’ Brook.

1662 – Daniel was selectman.  In early New England towns policy was set by men gathered in town meetings. Day-to-day operations were handled by a board of 3 to 5 selectmen. They oversaw public resposibilites such as the policing, roads, and fences.

10 Sept 1675 – Daniel gave Edmund and Elizabeth Heard the use of the northeast end of his house and provided that after he died it would be theirs if they paid £10 each to his son William and daughters Abigail and Susanna.

1677 – Daniel was tythingman. A tythingman was responsible for the moral behavior of a group of neighbors. He had the authority to bring problems to the court. 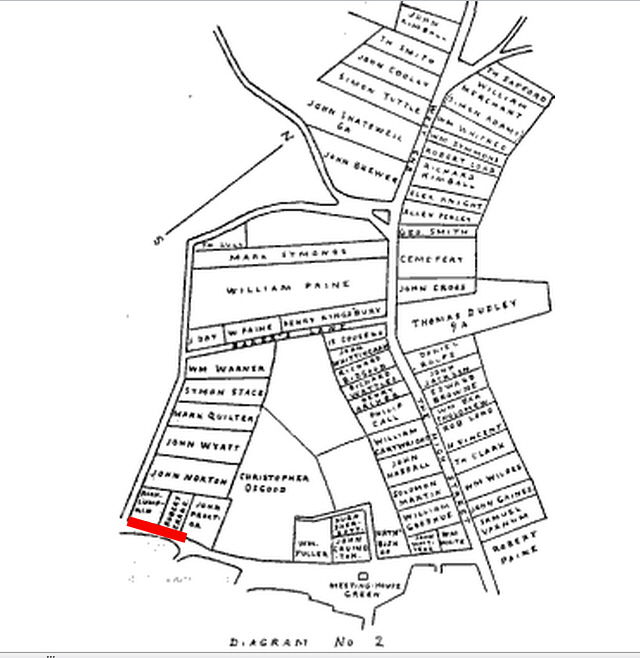 Referring to the bounds of the Norton pasture, it will be seen that, in 1638, there were three lots on Market St., as it is now called, owned by Richard Lumkin, Robert Crane, and one unassigned. The Robert Crane lot, as will be seen, is probably identical with the Daniel Warner lot of later years. Lumkin cannot be definitely located, but probably owned the corner, known familiarly as Damon’s Corner. Daniel Warner owned this lot in 1682 and Isaac Littlehale was its possessor in 1710

The lot on Market St. which was granted to Robert Crane, was owned by Daniel Warner in 1666. Part of the lot was sold by Philemon Warner, a half acre with dwelling, blacksmith’s shop and barn, to Jonathan Prince, Sept. 8, 1710 (21: 227).

Prince disposed of the property to John Heard Jun., May 1, 1776 (134: 262.) John Heard, Junior, the son of John, presumably, sold part of the homestead to Moses Lord Jr., chair maker, Dec. 21, 1790 (152: 239) the widow Abigail Heard occupying a tenement in the house. Nathaniel Heard, administrator of John Heard Jr., sold the southwest end of the dwelling to Richard Manning, clothier, Oct. 16,1798 (164: 151). Aaron Kimball acquired an interest in the estate prior to 1797, and Captain Robert Kimball purchased of William Heard, the same that he had bought of Moses Lord, by deed of April 18, 1835, May 11,1836 (291:290). Captain Kimball built the present dwelling, now owned and occupied by his heirs. One portion of the original house was removed by Ephraim Harris, the builder of the new structure, to his own land on Mineral St., and incorporated in the house that stands on the north corner of Mineral and Central Sts.

Daniel Warner conveyed to his son in law Edmund Heard and his daughter, Elizabeth, wife of Heard, the use of the northeast end of his house and provided that after his decease, “all my said dwelling house and outhouses, that shall be then standing upon the house lott that was my unckles, reserving still the privilege of the right of commonage, and the most of the house lot that was Robert Crane’s, . . . provided he pay 10£ each to his son, William Warner and his daughters, Abigail and Susanna,

John Dane, a tailor, was born in Berkhampstead, England, around 1612. In the late 1630s, which he recollects here as a period of “a great coming to New England,” he and his family emigrated to Ipswich, Massachusetts. He died in Ipswich in 1684. Dane’s parents, like many Puritan parents, raised their children to carry what historian Philip Greven calls an “inner disciplinarian” within their own consciences at all times. Dane’s mother reminded him: “Go where you will, God will find you out.” In this narrative, Dane, who always remembered her warning, related the temptations he faced over the course of his life—to steal, to accept the advances of women, to avoid church—and the prices he negotiated with an all-seeing God. (The spelling of this selection has been regularized to make it easier to read.).  “A Devil to Tempt and a Corrupt Heart to Deceive,” John Dane Battles Life’s Temptations“, ca. 1670s.

1692 – Daniel Warner, his wife Sarah and brother John write a petition in support of their neighbor Elizabeth Howe accused of witchcraft

The Perely family of Ipswich, Massachusetts, was among the chief accusers of Elizabeth Howe. They had a ten year old daughter they claimed was being afflicted by Howe. This was due, they claimed, to the fact that they had thwarted Elizabeth Howe’s chance of becoming a member of the Ipswich Church.  The child complained of being pricked by pins and sometimes fell into fits.  In their testimony against Howe, on June 1, 1692, the Perelys quoted their daughter as saying, “I could never afflict a dog as Good Howe afflicts me.” At first the parents did not believe their daughter’s accusations. They took the child to several doctors who told them she was “under an evil hand”.  Her condition continued for two or three years, until “she pined away to skin and bones and ended her sorrowful life”.

31 May 1692 – When Elizabeth Howe was brought in for examination Mercy Lewis and Mary Walcott, two of her main accusers, fell into a fit. She was accused by Mary of pinching and choking her in the month of May. Ann Putnam added her accusations to these by saying she had been hurt three times by Howe. When asked how she pled to the charges made against her, Elizabeth Howe boldly responded, “If it was the last moment I was to live, God knows I am innocent of any thing of this nature”.

3 Jun 1692 – Having witnessed a conversation between Samuel Perley’s little girl and Elizabeth Howe. Reverend Phillips of Rowley testified in her defense.

In her defense, Elizabeth Howe’s father-in-law testified to her good nature. He said that she, “[set] a side humain infurmitys as [become] a Christion with Respact to [himself] as a father very dutifully & a wifife to [his] son very carfull loveing obedient and kind Considering his want of eye sight.” He concluded his witness by saying, “now desiering god may guide your honours to se a difference between predigous and Consentes I rest yours to Sarve”

John, his brother Daniel and Daniel’s wife Sarah wrote this deposition in support of Sarah Howes.

William was fence-viewer, 1671; a man of considerable importance, as soldier and civilian. In Feb., 1669/70 he bought John Belden’s holdings on E. side Broad St., betw. Nathaniel Graves N., and Thomas Curtis S., at which place he probably lived. In 1692, he bought the Graves holding, on Broad St., fm. Nathaniel Graves’ heirs, in Springfield and Hadley; he d. 1714.

We whose names are underwritten, being in the year 1692 called to serve as jurors in court at Salem, on trial of many who were by some suspected guilty of doing acts of witchcraft upon the bodies of sundry persons, we confess that we ourselves were not capable to understand, nor able to withstand, the mysterious delusions of the powers of darkness and Prince of the air, but were, for want of knowledge in ourselves and better information from others, prevailed with to take with such evidence against the accused, as, on further consideration and better information, we justly fear was insufficient for the touching the lives of any (Deut. xvii) whereby we fear we have been instrumental, with others, though ignorantly and unwittingly, to bring upon ourselves and this people of the Lord the guilt of innocent blood; which sin the Lord saith in Scripture he would not pardon (2 Kings xxiv.4)- that is, we suppose, in regard to his temporal judgments.

We do therefore hereby signify to all in general, and to the surviving sufferers in special, our deep sense of, and sorrow for, our errors in acting on such evidence to the condemning of any person; and do hereby declare, that we justly fear that we were sadly deluded and mistaken –

for which we are much disquieted and distressed in our minds, and do therefore humbly beg forgiveness, first of God, for Christ’s sake, for this our error, and pray that God would impute the guilt of it to ourselves nor others, and we also pray that we may be considered candidly and aright by the living sufferers, as being then under a strong and general delusion, utterly unacquainted with, and not experienced in, matters of that nature.

We do hereby ask forgiveness of you all, whom we have justly offended, and do declare, according to our present minds, we would none of us do such things again, on such grounds, for the whole world – praying you to accept of this in way of satisfaction for our offense, and that you would bless the inheritance of the Lord, that he may be entreated for the land.