Mehitable Brown was born in 1715.   Her parents were Joseph BROWN and Abigail PEARSON. Mehitable died in Oct 1794 in Newbury, Mass.

Children of Samuel and Mehitable:

Samuel was a millwright and farmer and resided in Rowley.

4 Jul 1786 – Gave certain lands to his daughter Elizabeth placing them in care of his son Joseph who secured the same to her by bond the same day.

Joseph’s second wife Anna Quimby was born in 1738. Could Quimby have been her married name?

Joseph was a carpenter and resided in Newbury (Byfield).  During the Revolution, he was an officer in the army.

During the Saratoga campaign General John Burgoyne surrendered his army of 5,000 men to the American troops on October 17, 1777. The terms were titled the Convention of Saratoga, and specified that the troops would be sent back to Europe after giving a parole that they would not fight again in the conflict.

Under guard by John Glover’s troops [including Lt. Danforth’s], they were marched to Cambridge, Massachusetts, where they arrived on November 8. The rank and file were quartered in crude barracks that had been constructed during the 1775 siege of Boston, while most of the officers were billeted in houses. The army ended up spending about one year in Cambridge, while negotiations concerning its status took place in military and diplomatic channels. During this year, about 1,300 prisoners escaped, often because they became involved with local women while working on farms in the area.

The Continental Congress ordered Burgoyne to provide a list and description of all officers to ensure that they would not return. When he refused, Congress revoked the terms of the Convention, resolving in January 1778 to hold the army until King George ratified the convention, an act they believed unlikely to happen, as it represented an acknowledgment of American independence. 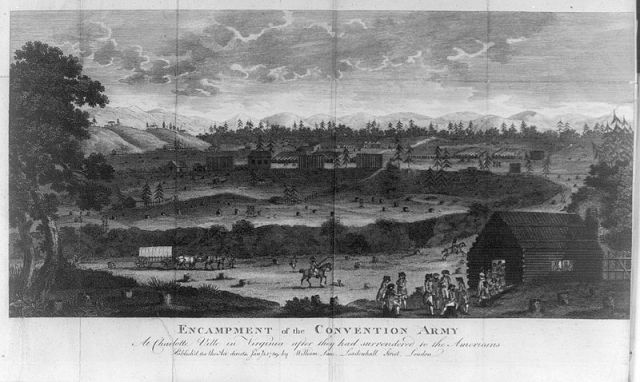 A 1789 etching depicting the encampment of the Convention Army at Charlottesville, Virginia

After remaining in Boston for the winter, the decision was made to relocate the prisoners to Charlottesville, Virginia, where they could be more closely watched and better supplied. It was not until November 1, 1778, that General William Philips marched the prisoners southward. Many of the British officers had their wives and children with them, and wagons were provided for their transportation but the men had to march on foot. They traveled through Lancaster and York, Pennsylvania in December of the same year, and finally reached Charlottesville, 700 miles from Boston, in January 1779.

Joseph “died in a fit” before Sept. 10, 1807, when administration of his estate was granted to his son Samuel ; the widow was mentioned in the probate account.

Children of Joseph and Rebecca:

In the 1840 census, Friend was living alone in Newbury.

Samuuel was a blacksmith; resided in Newbury. On the first of September after his death administration of his estate was granted to Samuel Newman at the widow’s request. Guardians were appointed for the six children surviving.

Joseph was a housewright and ship-joiner. He removed to Salem. He sold land in Newbury to his brother Friend in 1805, and conveyed a tract to him for life-use in 1819. With wife Phebe, he sold land in Salem Feb. 9, 1816, and other tracts without her at later dates.

Eunice’s husband Stephen Brown’s origins are unknown, but his 5 Dec 1757 marriage to Eunice Danforth in the South Hampton Church is recorded in the New England Historical and Genealogical Register, Volume 52. Other Browns marrying in that church that year: Jan 11: Isaac Eastman and Ann Brown, Mar 3: Ephraim Brown and Mehitable Flandes, Jun 14: John Eastman and Lydia Brown.

Children of Ruth and Abner:

Anna’s first husband Joseph Downer was born 30 Nov 1756 in Newbury, Essex, Mass. His parents were Andrew Downer and Sarah Pike. Joseph drowned on the Newbury bar before 1792 when Anna remarried.

Children of Anna and Joseph