Richard Sparrow was born in 1605 in Kent England.  He was married to Pandora BANGS in 1629. He immigrated in 1632 from England.  Richard died on 8 Jan 1660/61 in Eastham, Barnstable, Mass. Burial in Cove Burying Ground

Our ancestor Capt. Jonathan SPARROW was  his only child.

Pandora Bangs  was born in 1605 in Panfield, Braintree, Essex, England. Her parents were Edward BANGS and Rebecca HOBART. Pandora died after Jan 1665 in Eastham, Plymouth Colony and is burried in Cove Burying Ground. 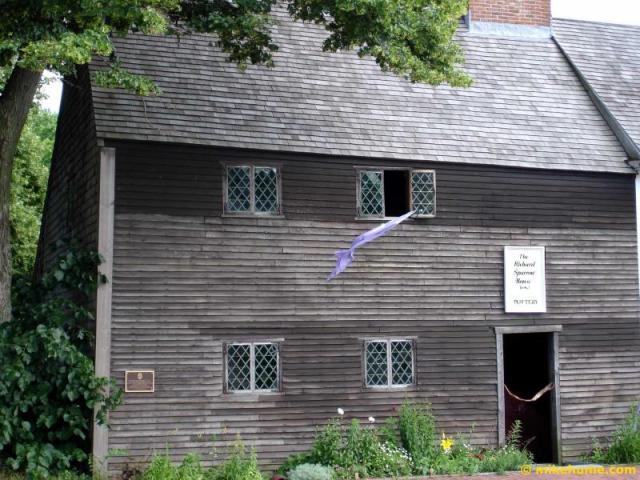 Richard was a Yeoman and a Surveyor,

On or before 1653 – Moved to Eastham, Massachusetts

HERE RESTS THE DUST OF RICHARD SPARROW AND HIS WIFE PANDORA WHO CAME FROM KENT COUNTY ENGLAND ABOUT 1633 AND SETTLED IN PLYMOUTH  ABOUT 1650 THEY CAME TO EASTHAM AND SETTLED NEAR THIS PLACE WHERE HE DIED JANUARY 8,1660 HERE ALSO RESTS JONATHAN SPARROW ONLY CHILD OF RICHARD TOGETHER WITH HIS FIRST TWO WIVES REBECCA BANGS & HANNAH PRINCE HE SETTLED IN THE PART OF EASTHAM NOW EAST ORLEANS WHERE AFTER FILLING MANY OFFICES OF HONOR AND TRUST IN BOTH CHURCH AND STATE HE DIED MARCH 21, 1706 AGED 73 YEARS

Richard Sparrow, his wife Pandora, and son Jonathan, left their home in England, and arrived in New  Plimoth by 1633.  As a freeman, Richard was granted a house tract of six acres in 1636, which required him to construct a house within four years.   The original two-story house contained one room on each level and utilized cross summer beam construction.  With its large rooms, leaded glass windows and paneled walls, it was a grand home on the banks of what is now known as Town Brook.

By Seventeenth Century standards, Richard’s family was small, which dictated the demanding work of colonial life be completed by only three family members.  In 1639, Mary Moorecock was apprenticed to Richard and Pandora for nine years in exchange for food, lodging, clothes and a ewe lamb.  The lamb was to be kept by Mary’s stepfather, who was to “keep one third of the increase for labor”.

Richard Sparrow was a surveyor by trade.  He was actively involved in the Colony and appointed to “View of the Meadows” in 1640.  During the same year and the following one, he served as Constable for the Colony.  Between 1640 and 1653 he was named Surveyor of Highways seven times, and sat on over twenty-eight juries.  By 1642 Sparrow’s land base grew, adding seven or more tracts to his original six acre house lot.

In 1644 Richard and Pandora adopted Elizabeth Hopkins, increasing the family size to five members.  The Sparrow family remained in this house until 1653 when it was sold to George Bonum.  The family soon after moved to Eastham.  While in Eastham, Richard remained active in the colonial government, serving as Eastham’s representative to Plymouth, as well as deputy to the General Court.  In 1657, Sparrow sold his remaining land holdings in Plymouth to Gyles Rickard.

Upon Richard Sparrow’s death on January 8, 1660, he was buried in Eastham and his estate was divided among his wife, son and three surviving grandchildren.

EDUCATION: He signed his name to an agreement regarding the Kennebec trade, 6 October 1659. His inventory included “a Bible [and] 2 small books” valued at 10s.

ESTATE:
Assessed 9s. in the Plymouth tax lists of 25 Mar 1633 and 27 Mar 1634
7 Nov 1636 _ Granted six acres at Plymouth “to belong to their dwelling houses there, & not to be sold from their houses”
5 Mar 1637/8 – Granted forty acres “at the north end of Fresh Lake, and a parcel of marsh for meadow lying on the south side of Fresh Lake”
1 Jun 1640 – Granted five acres of meadow
2 Nov 1640 – Granted five acres at Lakenham
12 Jan 1639/40 – John Barnes of Plymouth sold to Richard Sparrow of the same four two-year-old steers and one three-year-old bull, for £83 Richard Sparrow immediately sold the bull and two of the steers to Josias Winslow of Plymouth, for £50.
16 Sep 1641 – Richard Sparrow was granted two acres of meadow ground at Wood Island “which was Mris Fullers”
7  Dec 1641 – Granted a parcel of upland 7 December 1641
17 Oct 1642 – Granted four acres of upland at the head of Mr. Hicks’s field.
1653 (day and month not given) – Richard Sparrow of Eastham sold to George Bonum of Plymouth “all that his house and garden plot on which the house standeth being scituate in Plymouth aforesaid in the South Street near the mill together with six acres of upland … in the new field”
4 Jun 1657 – “Richard Sparrow of Eastham, planter,” sold to Giles Rickard Sr. of Plymouth, weaver, “a parcel of upland meadow in the meadow commonly called Doten’s Meadow in the township of Plymouth aforesaid containing five acres”
6 Oct 1657 – Richard Sparrow and others were allowed to claim lands about thirteen English miles from Rehoboth
1 Jun 1658 – Granted a portion of land between Bridgewater and Weymouth

In his will, dated 19 Nov 1660 and proved 5 Mar 1660/61, Richard Sparrow bequeathed to “Pandora my loving wife my dwelling house and housing with my garden plot adjacent in the Township of Eastham during her life and then to belong to Jonathan Sparrow my son” (along with some movables); “as for my uplands at Poche and my meadow ground … the one half I have already given to Jonathan my son and the other half … I give to John Sparrow my grandchild as his propere inheritance only my wife to have the use of my meadow or as much as she shall need during her life”; “whatsoever land shall befall to me from the country as my right it being purchased I give to John Sparrow my grandchild; “to the church of Eastham one ewe sheep to be disposed of according to the discretion of my overseers”; to “Pressila Sparrow my grandchild one ewe sheep to be improved in a small stock for her, and the rest of my ewe sheep I give to John and Rebecca Sparrow my grandchildren to be improved as a stock for them; to “Jonathan Sparrow my son my great cloth coat, and for the rest of my wearing apparel, my wife to dispose of them as she see cause”; wife Pandora and son Jonathan to be executors; friends and brethren Mr. Thomas Prence of Eastham, Mr. Thomas Willett of Rehoboth and Lieutenant Thomas Southworth of Plymouth to be overseers; residue of estate to be equally divided between wife and son The inventory of the estate of Richard Sparrow was taken 22 Jan 1660/61 and totalled £85, with no real estate included

MARRIAGE: By about 1629 Pandora _____ (assuming she was mother of Jonathan); she survived her husband. (According to some sources, in “1665 the widow [Pandora] and son [Jonathan] sold the Eastham home and removed to what is now East Orleans where Pandora probably died” [ Dawes-Gates 2:765, citing CCL 32:3]; this transaction is not recorded in the Plymouth Colony land records.)

24 Jun 1639  – “Mary Moorecock hath of her own voluntary will, with consent of her father-in-law, Thomas Whitton, put herself apprentice with Richard Sparrow, of Plymouth, and Pandora, his wife,” for a term of nine years   in exchange for food, lodging, clothes and a ewe lamb.The lamb was to be kept by Mary’s stepfather, who was to “keep one third of the increase for labor”.

24 Jun 1639 – Mary Moorecock, with the consent of her father-in-law (step father) apprenticed herself to Richard Sparrow and his wife Pandora for nine years (PCR 1:128-9). It is likely Richard and Pandora needed help running their household.

7 Dec 1641  – Richard was one of eight men who brought various actions against James Luxford, primarily for trespass

1644 – Adoption of  Elizabeth Hopkins. Willed by her mother Ruth to be raised “as his own” until married or 19 years old. Transfer carried out by Myles Standish and Caleb Hopkins. On 5 October 1656, Captain Myles Standish brought suit against Richard Sparrow of Eastham, on behalf of Elizabeth Hopkins, charging that Sparrow had not performed the terms of an agreement concerning Elizabeth.

2 Oct 1650 Thomas Shrive was presented to the court for pilfering corn from Richard Sparrow’s barn, and Richard Sparrow was censured for concealing Shrive’s crime (PCR 2:162). Was Richard a compassionate man who understood Shrive’s need for food and forgave him for the theft?

5 Oct 1656  – Captain Myles Standish brought suit against Richard Sparrow of Eastham, in behalf of Elizabeth Hopkins, charging that Sparrow had not performed the terms of an agreement concerning Elizabeth

6 Oct 1657 – Richard Sparrow won his suit against Ralph Smith for taking away a piece of timber, though having been forbidden, and refusing to give it back