Children of Thomas and Elizabeth:

“Thomas Dexter, son of Thomas Dexter, was born in England and came to this country with his father. In 1647 he was chosen constable for the town of Sandwich. This proves that he must have been born before the family came to America, as he must have been over twenty-four years of age when elected constable. In 1648 he kept the mill that his father built in 1640. In 1655 he was commissioned Ensign of a company of militia, which office he held many years, and was known as “Ensign Dexter.” He served upon the jury very often between 1652 and 1659, and was elected surveyor of highways and collector of taxes 1675, and the record says he was an inn-keeper in 1680.

He did not have the fondness for lawsuits that his father had, but he did inherit some of his father’s quarrels about line fences, but these he settled by adjustment. In one case when there was a dispute between the town of Sandwich and him, the matter was left to Gov. Thomas PRENCE,  Gov.  Thomas Hinckley and Mr. Constant Southworth to settle. These men were among the most prominent men in the colony.”

“We whose names are here under written doe give our full and free consent that Thomas Dexter the younger shall have those two Islands of upland that lye in his mersh near John FREEMAN’s house.

How John Fuller might have been related to Thomas Dexter has not been determined. (Later, at Plymouth court 10 June 1662, Mr. Thomas Dexter, Senior, complained of Lt. Fuller and sundry other neighbors for pulling up a fence and turning in cattle; ; this was almost certainly not the John Fuller of the Essex case.)

In 1663 Gov.  Thomas Hinckley,Constant Southworth and Thomas Dexter Jr. were a “committee to settle the boundary between Sandwich and Plymouth.

In 1655 he was, according to the usages of the times, entitled to the honor of being styled “Mister,” and in the latter part of his life, being a large landowner, was styled “Gentleman.” He appears to have been a worthy man, enterprising, useful, a good neighbor and a good citizen. In addition to the land received from his father, he was granted 100 acres upland in Sandwich in 1667. 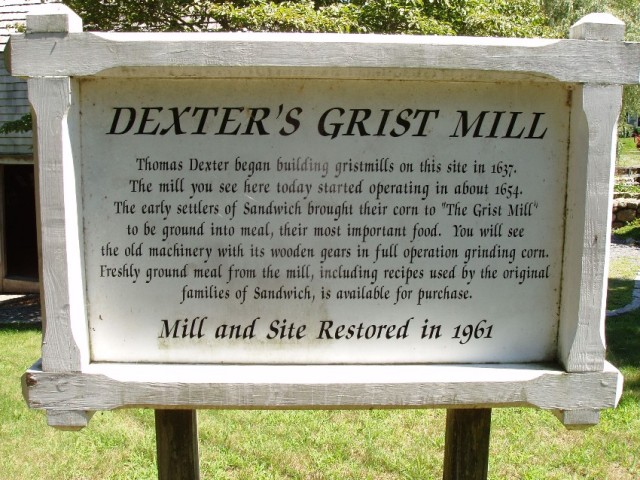 All five of Thomas and Elizabeth’s children, except Thomas III, were alive at the time of his 29 Dec 1686 death and are mentioned in the division of his property.

Agreement for division of property of late Thomas Dexter, Gentleman, February 16. 1686/87, between Elizabeth Dexter, Daniel Allen of Swansea for his wife Mary, Jonathan HALLETT of Yarmouth for his wife Abigail, and John Dexter:

“The widow to have one-third part of all the movable estate and chattles, the mill excepted, also to enjoy ye westerly end of the dwelling house, both cellar and “two lower rooms and chamber and garrett, for the rest of her life; but if she sees fit to rent her part she is to let her son John Dexter or his heirs have the refusal of it at same price others would pay. She is also to have the corn, rye wheat, butter and meat she now possesses: and her son John is to cut and carry home for her suitable and sufficient firewood while she dwells in Sandwich, to winter and summer two cows for her and to pay her £9 per annum while she lives.

The son John to have the rest of estate both real and personal paying to his sister Elizabeth Dexter £55 (£5 down and balance in four years, but if she marries within three years the £50 is to be paid within one year after her marriage).

To Jonathan HALLETT £50, one half on next Michaelmas day, the rest within three years from date of agreement. [Because Michaelmas falls on Sep 29, near the equinox, it is associated with the beginning of autumn and the shortening of days. In 17th Century England, Michaelmas marked the ending and beginning of the husbandman’s year]

John is to pay all debts and receive all debts due the estate.”

Children of Mary and Daniel

John’s wife Mehitable Hallett was born in 1655 in Yarmouth, Bristol, Mass. She was his first cousin. Her parents were Andrew HALLETT Jr. and Anne BESSE. Mehitable died in 8 Nov 1725 in Portsmouth, Newport, Rhode Island

John was admitted freeman 1681. He was a member of militia in 1675, and while acting as guard was beaten by one Joseph Surge. Said Burge was fined £5, and 10s. was given to John.

Children of John and Mehitable: (born in Portsmouth RI?)

“Genealogy of the Dexter Family in America, 1905″ by Warden and Dexter: