Sophia NICHOLS was born about 1735 in Enfield, CT. She married Nathaniel PEASE II  on 31 Oct 1751 in Hartford, CT.  After Nathaniel died, she married 27 Oct 1763 in Enfield, Hartford, Connecticut to Benjamin Parsons. It’s intriguing to think that Sophia’s grandfather may have been Capt. Cyprian Nichols Jr. He was the only Nichols in Hartford, though there were a couple other Nichols lines elsewhere in Connecticut.

Children of Cyprian and Helena:

Children of  Cyprian and Mary:

Cyprian Nichols Bio — Source: A Catalogue of the Names of the First Puritan Settlers of the Colony of Connecticut 1852

There are a couple of other Connecticut Nichols lines, but they were not located in Hartford.

Children of Adam and Anna

2.  Francis NICHOLS was baptized at Sedgeberrow, Worcestershire, England on 25 May 1575; His parents were John NICHOLS and Joan [_?__]. He married Frances WIMARKE on 24 Jan 1599/1600 at Sedgeberrow England. He settled at Stratford, Connecticut, by 10 Oct 1639, when he was appointed sergeant of the Stratford trainband, and that same year was listed with his three sons (John, Isaac, and Caleb) among the 17 first settlers of Stratford. Francis died before 8 Jan 1650/51

Frances Wimarke (Wilmark, Wymark, Wimark) was baptized 2 Nov 1577 at Sedgeberrow, England Her parents were Robert WIDMARKE of Sedgeberrow and [__?__]. Frances apparently died before the family’s removed to New England, perhaps in 1634.

Children of Cyprian and Helena:

John was named for his maternal grandfather.

Although definitive proof is lacking, he is probably the John Nichols, called “the aged,” buried at Hartford’s Ancient Burying Ground (Center Cemetery) on Jan. 4, 1761. This corresponds with the Hartford 1st Chh. record of the death of “the aged John Nichols” on the same date, but that record gives no age. If this was the son of Capt. Cyprian Nichols, Jr., he died Æ. 64 years.

On Apr 19 1769 at the same cemetery, the widow Meriba Nichols buried an unnamed daughter and the widow Meriba was buried on Aug 17 1770, Æ. 67 years. There is no record of the marriage of a John Nichols to a Meribah in the Hartford vital records at either the Hartford 1st or 2nd church, and no baptism record of a child of John and or Meriba Nichols.

Child of John and Meriba:

Child of John and Mary Owen

Elizabeth’s second husband William Powell, Jr. was born 29 Oct 1691 at Wethersfield, CT.  His parents were  William Powell and Sarah Francis,  William died 12 Dec 1760 at Hartford. One identified child of the marriage. William had two children by his 1st wife, Elizabeth Welles, dau. of Joseph Welles and Elizabeth Way, who d. July 4, 1725 at 27 years of age.

By this second marriage the records allude to a son Cyprian, whose birth or baptism is not of record at Hartford or Wethersfield. But, on Oct 14 1766 a Cyprian Powell is recorded as having been charged for the burial of a child of his sister at the Center Cemetery and was later charged for the burial of his mother at that cemetery, who is not named, aged 70, on Jan. 12, 1775.

Cyprian was baptized at the Hartford 2nd Chh Hartford on May 17 1702, five days after the death of his mother. (Goodwin in “Genealogical Notes” errors in stating he was bapt. in Feb. 1708 then makes him the son of his father’s 2nd wife, Mary Spencer.)

Cyprian’s wife Agnes Humphrey was born 17 Feb  1711/12 at Hartford.  Her parents were Nathaniel Humphrey and Agnes Spencer.   She was Cyprian’s fist cousin once removed, her mother was the sister of Cyprian’s stepmother, Mary Spencer.   After Cyprian died, Agnes  married Capt. Isaac Seymour (1723 – 1755), by whom she had three known children,  Agnes died 20 Dec 1793 at Hartford.

At the May 1745 session of the Connecticut Assembly, Lieut. Cyprian Nichols was appointed adjutant to the Connecticut forces being sent to Cape Breton, Nova Scotia in the Siege of Louisbourg (1745) against the French in King George’s War, the third of four French and Indian Wars. However, he either died before actually being involved or after his return as the Assembly subsequently appointed Ensign Timothy Bigelow in his place.

According to the Diary of Rev. Daniel Wadsworth (1737-1747) members of the Hartford First Church were returning from Cape Breton a few days prior to the death of Lieut. Nichols. The same diary (p. 125) says that Lieut Nichols died “at night”, Aug. 28, 1745, and was interred two days later on Aug. 30, 1745. If he had a gravestone, as of 1835 Hoadley’s gravestone inventory does not evidence one for Lieut. Nichols. Losses to the New England forces in battle had been modest, although the garrison that occupied the fortress during the following winter suffered many deaths from cold and disease.

Casualties and losses
100 killed or wounded
900 died of disease

On Nov. 26, 1745, the initial inventory of the estate of Lieut. Nichols was taken and in October of that year administration of his estate was granted to the widow Agnes Nichols. She m. 2) Capt. Isaac Seymour of Hartford, Conn.

The children of Lieut. Cyprian Nichols, 3rd and Agnes Humphrey were:

Children of Cyprian and Agnes:

James’ wife Mary Wadsworth was baptized 13 Oct 171. in the Hartford 2nd Church.  Her parents were Joseph Wadsworth and Joanna Hovey.  Mary died  26 Jun 1783 at Hartford. No known children of record.

Mary was the paternal great granddaughter of Lieut. Col. John Talcott and his first wife Helena Wakeman, the parents of Capt. James Nichols’ father’s first wife, Helena Talcott. Mary was also the maternal great granddaughter of Capt. Aaron Cooke and Sarah Westwood, latter at whose father William Westwood’s house at Hartford the immigrant Capt. Cyprian Nichols, the paternal grandfather of Capt. James Nichols, had resided for thirteen years (1646-1659) before returning to Hartford from England in circa 1668. 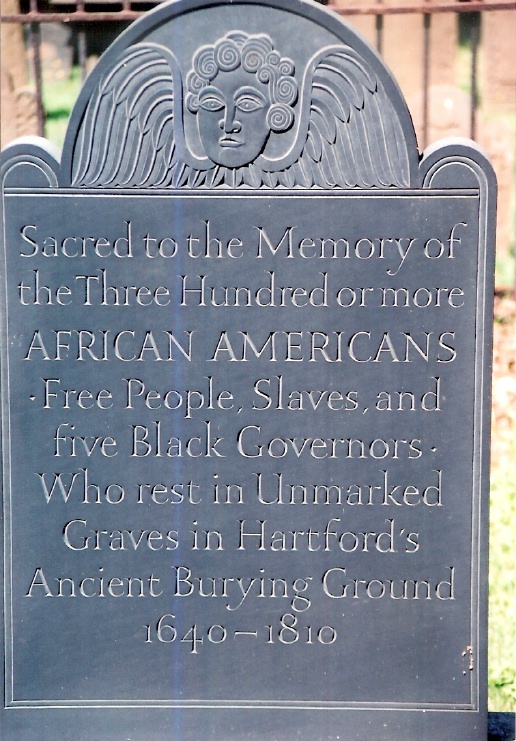 Boston Nichols was elected “black governor” in 1800. And was one of the final individuals to have been buried in the Hartford Ancient Burying Grounds.

William’s wife Mary Farnsworth was baptized 5 Jul 1719 in the Hartford 1st Church.  Her parents were Joseph Farnsworth and Mary Olcott,  Mary died 14 Oct 1771 at Hartford. Ten children of the family.

William was a mariner and died of fever at sea on Sep 2 1767. His estate was insolvent and his brother James was appointed administrator.

Children of William and Mary:

Return served in Capt. Harmon’s Company in 1776 at the Siege of Boston.

Children of Sarah and Return:

Children of Hannah and Elisha:

Children of Thankful and Ebenezer:

Helena’s baptism does not appear in either the Hartford 1st or 2nd church records, but is named as a daughter in the distribution of her father’s estate

A Catalogue of the Names of the Early Puritan Settlers of the Colony of Connecticut Author: Royal Ralph Hinman (1852)

This entry was posted in 11th Generation, Line - Miner. Bookmark the permalink.