Everhard  may have been born in Stoke Dry Village

Katherine Stockbridge de Vandershaff, Theobor [Theodore] de Newkirkwas born about 1560 in  the Netherlands.  Everard died in 1592 when  their daughter Elizabeth DIGBY was just eight years old.  Elizabeth was “sent into Holland for Education.” Left an orphan, she went to her mother’s family to be brought up.

The second Chief Justice of Massachusetts Benjamin Lynde, in his Will (1776) gives to his wife his “best Tankard” and “half the Plate and Books, to be accounted six hundred pounds;” and “to my grandson Lynde Walter a Large flowered Silver Beaker that was my great Grandmother Elizabeth Digby’s, which piece of Plate is near two hundred years old,” “and to my Grand daughter Mary Lynde Walter … my small silver Tankard.”

Children of Everard and Catherine:

When I saw the name Everard Digby pop up on our tree, I thought we were related to a famous conspirator of Guy Fawkes fame. The plan of the Gunpowder Plot was to blow up Parliament with James I in it and install his nine-year-old daughter, Princess Elizabeth, as the Catholic head of state.  A feature film about Everard Digby’s adventurous life is in development. Working Title – Digby: The Gunpowder Plotter’s Legacy.  Check out the filmmakers site here.

Unfortunate for fame, it appears that while rare today, Everard was a popular name in the Digby family. For example there was a 16th-century scholar also named, Everard Digby.  The conspirator Everard  was our Everard’s third cousin.

Not to fear, we do have a Digby Catholic martyr in our tree,  Everard’s father Simeon DIGBY was executed for High Treason in 1570 as part of the Rising of the North.  His wife  Anne Grey also died 28 Mar 1570, but I haven’t found if she also met a violent end, but 600 supporters of Mary were executed, while many others fled into exile.   Everard would have been 25 – 30 years old in 1570, so he was an independent adult when his parents died.

The famous Sir Everard Digby was born about 1578.  His parents were Everard Digby and Maria Neale.  His grandparents were Kenelm Digby and Anne Cope.  In 1596, while still a teenager, he married Mary Mulshaw, a young heiress who brought with her Gayhurst House in Buckinghamshire. Sir Everard was executed 30 Jan 1606 in the Tower of London

Everard was a member of the group of provincial English Catholics who planned the failed Gunpowder Plot of 1605. Although he was raised in a Protestant household, and married a Protestant, Digby and his wife were converted to Catholicism by the Jesuit priest John Gerard. In the autumn of 1605 he was part of a Catholic pilgrimage to the shrine of St Winefride’s Well in Holywell. About this time he met Robert Catesby, a religious fanatic who planned to blow up the House of Lords with gunpowder, killing James I. Catesby then planned to incite a popular revolt, during which a Catholic monarch would be restored to the English throne.

The full extent of Digby’s knowledge of and involvement in the plot is unknown, but on Catesby’s behest Digby rented Coughton Court and prepared a “hunting party”, ready for the planned uprising. The plot failed however, and Digby joined the conspirators as they took flight through the Midlands, failing to garner support along their way. Digby left the other fugitives at Holbeche House in Staffordshire, and was soon captured and taken to the Tower of London.

Digby was tried on 27 January 1605. Despite an eloquent defence, he was found guilty of high treason, and three days later was hanged, drawn and quartered.

Digby was hanged, drawn and quartered early on Thursday 30 January. Throngs of spectators lined the streets as he was strapped to a wattled hurdle, and alongside Robert Wintour and John Grant was dragged by horse to the western end of Old St Paul’s Cathedralchurchyard. Thomas Bates was delivered in a similar fashion, but from the Gatehouse Prison. Armed guards interspersed along the route were there to defend against any possible rescue, but did not keep the miscreants’ families from witnessing the fate of the four men. Cold and grubby, Digby was the first of the four to face the executioner. He mounted the scaffold and addressed the audience, telling them that he knew he had broken the law, but that morally, and in the eyes of his religion, he had committed no offence. He asked for God’s forgiveness, and the country’s, and protested the Jesuits’ and Father Gerard’s innocence. He refused the attentions of a Protestant clergyman, speaking to himself in Latin, before saying goodbye to his friends.

Digby was then stripped of his clothing, except for his shirt. Murmuring “O Jesus, Jesus, save me and keep me”, he climbed the ladder and was hanged for a short period. The executioner cut the rope, and Digby fell back to the scaffold, wounding his forehead. Fully conscious, he was taken to the block and castrated, disembowelled, and quartered. Wintour, Grant and Bates followed. The remaining four conspirators suffered similar fates the following day, at the Old Palace Yard in Westminster.

Guy Fawkes Night,   is an annual commemoration observed on 5 November, primarily in England. Its history begins with the events of 5 Nov 1605, when Guy Fawkes, a member of the Gunpowder Plot, was arrested while guarding explosives the plotters had placed beneath the House of Lords. Celebrating the fact that King James I had survived the attempt on his life, people lit bonfires around London, and months later the introduction of the Observance of 5th November Act enforced an annual public day of thanksgiving for the plot’s failure. 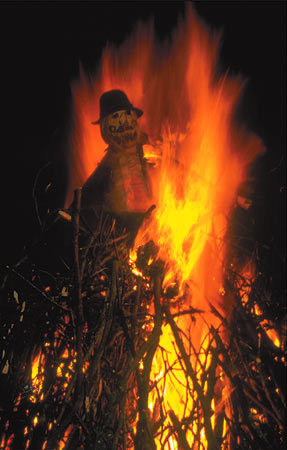 Within a few decades Gunpowder Treason Day, as it was known, became the predominant English state commemoration, but as it carried strong religious overtones it also became a focus for anti-Catholic sentiment. Puritans delivered sermons regarding the perceived dangers of popery, while during increasingly raucous celebrations common folk burnt effigies of popular hate-figures, such as the pope.  Eventually, the violence was dealt with, and by the 20th century Guy Fawkes Day had become an enjoyable social commemoration, although lacking much of its original focus. The present-day Guy Fawkes Night is usually celebrated at large organized events, centered around a bonfire and extravagant firework displays.

Everard Digby The Conspirator Ancestry – 3rd Cousin of our Everard

Detail of carving from the tomb of Kenelme Digby, showing some of his 11 children.

Everard’s grandson Simon Lynde  was only twelve when his father died and was brought up by his widowed mother, who was in communication with her wealthy and influential Digby relatives. He was presented by John Digby first Earl of Bristol to King Charles I, to offer his allegiance. 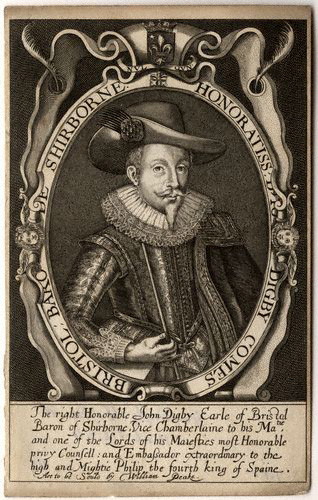 John Digby, 1st Earl of Bristol  was an English diplomat and a moderate royalist during the English Civil War.

John  was educated at Magdalene College, Cambridge.   King James I sent Digby to Madrid as his ambassador to Spain during the early 1610s, and Digby was a leading figure in the unsuccessful Spanish Match, the effort to marry Prince Charles to the Infanta Maria Anna of Spain. Digby was made the scapegoat, recalled and ordered to reside on his estates. Charles after his accession offered Digby his favour if he would admit his fault : Digby, always a stubborn and hot-tempered man, refused. Charles, infuriated, impeached him and sent him to the Tower of London; Digby, undaunted, made counter-charges against the Duke of Buckingham, the prime favourite. His trial never proceeded, although he remained in the Tower until 1628, and the affair seriously damaged the King’s reputation as a man of honor.

The murder of the Duke of Buckingham caused Digby to reconsider his opposition to the King: like the Earl of Strafford and others he was alarmed at Parliament’s increasing radicalism. He offered his services to Charles and was reconciled with him. Charles, however, was slow to trust those who had ever opposed him and Digby had little influence through the 1630s.

As the political crisis of the early 1640s mounted, Digby emerged as a trusted and moderate royal adviser, along with his son George, Lord Digby. At the Council of Peers held at York in September 1640 ,the King showed an unprecedented willingness to listen to Bristol’s criticism of his policy, and agreed to his advice that a Parliament must be summoned. 1641 saw a complete reconciliation between the two men: Bristol with the Earl of Bedford became leader of the moderate Royalists in the House of Lords, working to achieve a compromise with John Pym, and save the Earl of Strafford’s life. After the collapse of the attempt at compromise Bristol was seen as a “hardline” royalist: as such Parliament imprisoned him after the outbreak of the Civil War, although he was later allowed to join the King at Oxford. After the King’s defeat he moved to Paris and died there in 1653.

Clarendon, who knew and liked Bristol, gave a sketch of him:

“Of a grave aspect, of a presence which drew respect, and a very handsome man who by the extraordinary favour of King James to his person was Ambassador to Spain before he was 30. Though he was a man of great parts and a wise man in Council he was passionate and supercilious and was too voluminous in discourse so that he was not considered there with much respect.”

A modern historian praised him as the greatest servant of the English Crown of his generation.

Ancestry of John Digby first Earl of Bristol – How was he related to Simon Lynde?

His parents were John Digby and Anne Throckmorton.  He maried Abigail Henningham.  Sir George died 2 Apr 1586. When George died young, the heir was his brother Sir Robert Digby. This Sir Robert made a judicious marriage with Lettice, grand-daughter of Gerald, Earl of Kildare and Baron Offaly, and herself in 1620 created Baroness Offaly, who, as the large memorial on the north wall of the sanctuary at Coleshill points out, was ‘Heir General to that Antient Family of Earls of Kildare in Ireland’, and brought to the Digby family the vast estates of the Earls of Kildare. Though Sir Robert and his children lie buried at St Patrick’s Cathedral in Dublin, memorials to them were erected at Coleshill as well, a practice that was also followed in the case of Kildare, Lord Digby.

2nd Great Grandparents – Simon Digby was born 1466 in Stoke Dry, Rutland, England. He married Alice Waleys on 1492 in Coleshill, Warwickshire, England. Simon died in 1520 Coleshill, Warwickshire, England and is buried in a tomb, made in his lifetime, bearing superb effigies of himself and his wife, in the sanctuary of Coleshill Church. Alice Walleys was born 1472 in Haddon, Devon, England.