Children of William and Elizabeth:

It hasn’t been proven that Aquila was the father of immigrants Aquila, Thomas and William Chase.  Even if it their descent can’t be proven, I think it’s likely they were related.  Perhaps the immigrants were Aquila’s nephews rather than sons.

The Chases of Chesham

Aquila and Martha lived in St. Thomas-the Apostle until 1611, when they moved to the parish of St. Nicholas, Cole Abbey, in London, where Aquila was known as a merchant and tailor.  Their children, born on Knight Rider’s street in London were, Anne, Martha, Sara, Elizabeth, Joane, and Aquila Jr.. Martha was buried in St. Nicholas on August 15, 1643 and Aquila was buried February 9, 1643, also in the parish of St. Nicholas, Cole Abbey, London.

In reviewing the evidence, I don’t think William Chase’s English birth or parents is really known. I’ve updated to show four competing theories, none of which really has strong evidence.

Thomas was one of the first founders of Hampstead, Province of New Hampshire, now Rockingham County in 1639 with his brother Aquila.

Thomas Chase was born possibly in Willesden Parish, Londonor Cromwell Parish, Nottingham. He died intestate in 1652. Early genealogical histories of the family indicate that Thomas and Aquila came from Cornwall, England. It is believed that they were employed by an uncle named Thomas Chase, who was part owner of a ship named “John & Francis” and that they learned to become navigators. Thomas’ brother, Aquila, was granted land in Hamptonon the condition that he go to sea and service the town for four years. This would tend to verify the above theory and would explain why they were found on the coast rather than in their original area of birth.

The settlement of Hampton, New Hampshire Began on October 14, 1638, under the leadership of Rev. Stephen BACHILLER. By the first part of 1639 another group arrived with Timothy DALTON, who became the associate pastor of the Hampton Church. It is probable that Thomas and Aquila were with this second group, as by 1640 immigrations had slowed considerably. We know that Thomas, at least, was in the second group as he is mentioned in a list of families that came to Hampton that second summer. In June of 1640 small grants were made to a number of people including Aquila and Thomas Chase. These grants were for six-acre house lots. Aquila later acquired six acres of upland meadow and swamp, which was sold to his brother, Thomas, when he moved to Newbury, now located in the present state of Massachusetts. In fact, it was his acknowledgement in court of the sale of all his land in Hampton, except a dwelling and one and one-half acre, to his brother, Thomas Chase of Hampton.

Our ancestos’ lots are underlined in red. Thomas Chase’s lot was on the southeast corner of this map on  today’s Winnacunnet Road next to the words “To The Sea”. — Map of the homes of the original settlers of Hampton, NH, recreated from published maps and ancient records in 1892

On February 23, 1645/46 sixty owners of house lots were given one or more shares in the “Common” Aquila received one and Thomas two. Thomas’ signature on a deed of sale to John Shilbrick shows that he was a literate man. His purchase of land which abutted the river was probably to facilitate his livelihood. He was a seaman who paid for the building
of a vessel by freighting boards from Exeter to Boston. The large trees along the coast were much in demand for the building of dwellings. The Thomas Chase homestead was a short way from “The Meeting House Green” and opposite that of his father-in-law, Thomas Philbrick. The site selected for the erection of a house of worship was on the northerly side of the salt marsh, about one-fourth mile distant from it. A large tract
of land near it was called The Meeting House Green and included all of what ws later know as the Ring Swamp, along the road around it. A common-way was laid along the eastern edge and later became the main road to the seashore. Around the green and along the common-way many homes were built, some of which are still inhabitated by descendants of the original owners.

Aquila Chase first appears at Hampton, New Hampshire.    A company under the leadership of Rev. Stephen BACHILER is supposed to have commenced the Settlement on 14 Oct. 1638.(Dow’s History of Hampton).Early in the year of 1639,a new band of settlers came with Rev. Timothy DALTON, who became associate pastor of the Hampton church.  The town was incorporated by the General Court of the Massachusetts Bay Colony 22 May 1639.  It is probable that Aquila and Thomas Chase came with the second company as it appears that emigration was greatly diminished by the year 1640.

The Hampton records show that in the year 1640, there was granted to Aquila Chase six acres for a house lot.  In 1644 an additional grant was recorded of six acres of “upland meadow and swamp”, which he sold to his brother, Thomas, on his removal to Newbury.  Before he removed to Newbury, he was seen gathering peas on the first day of the week and at the Quarterly Court held at Ipswich, 29 Sept. 1646, he and his wife, and David Wheeler, his brother-in- law, all of Hampton,were presented for gathering peas on the Sabbath.  One handed down tradition states that Aquila and David were returning home from a bountiful fishing day, upon their arrival, Ann proceded to the garden and prepare a meal celebrating their catch.  It came to pass that they were caught and were supposed to be punished for their act.

Other records recently found state that Aquila Chase came over from England on the Mary and John in 1630 but fails to mention his brother on that specific voyage.

Aquila was one of the first founders of Hampstead, Province of New Hampshire, now Rockingham County in 1639 with his brother Thomas. 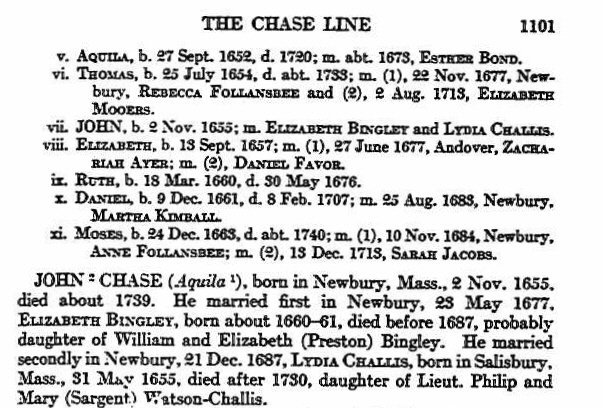 This entry was posted in Line - Shaw and tagged Father of Immigrating Brothers, Hampton Pioneer. Bookmark the permalink.